“When I get an ad script, I really don’t know how to prepare … It’s all just luck anyway … There is nothing to do here, I guess I’ll work it out in the audition.”  An actor will spend years developing preparation methods for TV and Film auditions, and techniques to draw on for acting scenes.  But when it comes to the elusive ad casting, they feel less in control of the outcome and more at a loss on how to walk into that studio.

In your rehearsals at home, play your surrounds and use effective studio blocking and eye-lines!

If we go with this idea that actors need to ‘give them what they are looking for’, and not leave it to anyone’s imagination of how you might be in the ad scenario, then it is imperative to imbue detail into all the physical activity as well.

This involves interacting with the surrounds, using effective miming and appropriate props. These give you things to do, business in your efforts to act realistically, and helps the directors, producers and clients see the ad played out.

In your preparation try setting up the environment according to the script and rehearse by acting in that space and interacting with anything in it. There will be information in the writing about where you are and what you are doing, but it is up to you to take it further by adding detail of your own.

A commercial script is written economically and often fits on an A4 page. If the writers filled in sentence after sentence with actions and blocking and thoughts and feelings then it would become an essay, and that leaves no room for an actor or director to be creative with their input.

“She wipes the bench clean as the kids play before dinner.” There is so much you can bring to this moment in terms of physical activity and thoughts. Don’t be vague in your business. Use your imagination as you create that world, really be in the setting and use any furniture or objects in it.

You can include aspects like what time of day it is, whether it’s late at night or you are just waking up, or temperature, it’s hot or cold, whether it is a noisy environment or peaceful and so on.

As you rehearse your movements and business for the ad, you should start blocking the action according to the parameters of a casting studio, not as the real life setting.  If you acted the scene in a real room, like your own kitchen, which has the fridge on one side and the cupboards on the other, then replicating this in studio would turn into a mess.

Make sure you compress your movements so even one step or weight shift signifies a change. Cheat interaction towards the front of the room. This way the camera captures as much of you, your eyes, your face, and your acting as possible!

We see a person’s inner thoughts and feelings in their eyes – the window to the soul – as well as through their facial expressions and reactions. You always want to make sure the camera can see your eyes because that’s the performance. They see your performance (not your ears), and they will connect to you.

You want to try to have your eye-lines towards the direction of the camera but never looking down the barrel of the camera. A good mark is a few inches to the right or to the left of the camera. If you choose to look at the edge of the camera itself, then that can also look like you are looking right into it. So a point on the back wall, close to the camera can work well.

Also prepare where to look for other characters or places and objects in your setting.  Part of the job of an actor is using your imagination, and pretending people and things are there with you. Still using all your acting tools you just drop in the person. You could place them on that back wall for the eye-line or somewhere closer to you, which means you are kind of focusing your eyes to a point in mid-air but within your acting field.  You will be required to do this on set a lot anyway.

By marking out the casting studio at home and rehearsing within that acting field, when you get to your audition you won’t be worrying about where to stand and look and your audition will flow with technical competence. 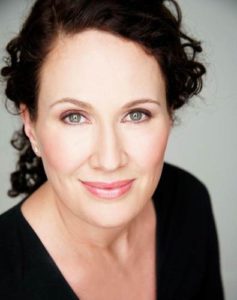 Gabriella Maselli McGrail (B.A. HONS, M.A. MEDIA STUDIES) is an actress and acting coach, specialising in commercial acting. She is a veteran of countless TVCs, and has spent over a decade assisting directors and actors in the casting studio and on-set. Her extensive insight into the advertising process helped her formulate a sure-fire strategy for successful commercial auditioning, culminating in an eBook: Transform Your Ad Audition! An Actor’s Guide to the Commercial Process, and workshops globally.