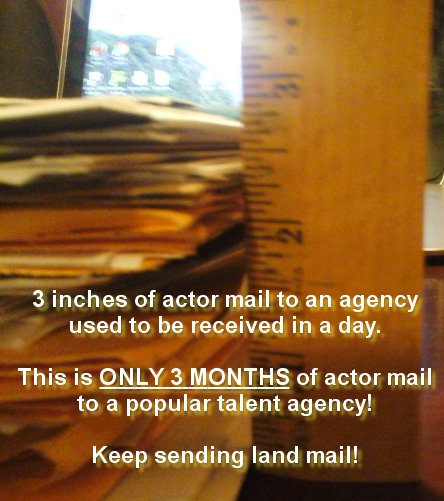 Why Actors Are Losing Audition Opportunities

What have actors done (or not done) to do themselves in? Many actors have abandoned a vital marketing technique and what’s worse; they haven’t adequately replaced the promotion ploy with an equally effective tool for achieving notice, audition appointments, and/or talent representation.

Mail. Land mail precisely. If you believe actor emails to talent agents and casting personnel have filled the gap, you’re woefully mistaken. As our industry insiders will soon attest, actor emails are either going unread via a single dump-click, or aren’t being received.

Diane Riley’s land mail inbox is becoming a postal desert. “There are less headshot/resumes than in the past. Probably a 75% decline. I used to receive 20 a day, now I get 3-5. Also, no one sends demo reels anymore. Mostly [actors send] listings for actor websites. I rarely look at the actor websites.”

Ken Melamed has noticed a sharp decline in actors’ mail–but not just via the postal system. “There is definitely less mail coming in overall,” Melamed states. “Much less from the post office, and not really that much via email.”

Lynne Jebens has noticed actors providing less marketing via land mail as well. But talent agents are not the only purveyors of talent discovering marginally less missives daily in their hard-copy inbox. Michael Cassara, a popular casting director, has noticed, like Paul Russell Casting, less actor marketing via land mail. “Our mail volume,” Cassara notes, “is probably 80% less than it was in 2006. I always look at everything that comes in the mail.”

Between land mail and email where is Cassara’s attention most focused? “I do actually give more attention to mail that lands on my desk than to electronic communication.” Cassara’s comment highlights the pivotal failure of actors relying solely on email—emails are much easier to ignore or dismiss than hard-copy mail.

In marketing my book ACTING: Make It Your Business to actors, I receive a higher return rate on my advertising dollar when I land mail large postcards heralding the Penguin Random House read. When I send individual emails prior, to those same actors, my sale’s meters across various platforms barely budge. Why? My postcard, with a personalized message to each recipient, gets priority attention in the actor’s vacant brick-n-mortar mailbox. No other way can I (or you to casting and talent representation personnel) get better undivided attention so cheaply! Whereas an email is one of too many inquiries lost in a cramped inbox.

I asked all of our industry insiders the following:

Are actors finding other methods of outreach, other than hard-copy mail, to make you aware of them? And if so, what are they doing, and is it more or less effective than land mail?

Riley reflected overall sentiment. “I think that people are emailing me more, but, I rarely look at unsolicited emails. They usually go to my spam, and then I delete them if I don’t recognize the name.”

Jebens also gets emails in lieu of hard-copy mail but says, “I don’t accept email submissions because you can’t trust that it isn’t someone trying to send out a virus. I don’t open anything that I don’t know [who it’s coming from].” Jebens strongly recommends contacting an agent first via hard mail. She also notes that actors are going to seminars like Access to Agents to meet agents, “I think [places like that] have made a huge difference. Why mail if you can meet?”

Melamed reiterated that he occasionally gets emails but that the best way to reach him is via land mail. “I have always maintained a policy to open up all mail and give each picture and resume and letter equal billing.”

All the industry insiders stressed that they open and review all land mail addressed to them which was sent by actors. When Cassara was asked if actors are finding effective methods of replacing marketing outreach beyond land mail he replied that, “Actors try many tactics—some are effective and some are not. The level to which something is successful/effective also varies a good deal based upon the individual casting director and his or her preferences. My website has a public email address where we’ll receive anywhere between 10 and 1000 emails a day, depending on how many projects we are working on at one time. So we will absolutely review emails sent to us, but as hypocritical as it might be to acknowledge this—at the present time—hard-copy mailings tend to capture my attention a bit longer and a bit more focusedly [sic].”

Paul Russell Casting has noticed that many actors no longer self-submit themselves via land mail for specific castings! Actors are foolishly relying solely on electronic submissions via mass-market audition sites. But there is a major flaw in that passivity. Not all PRC projects or those of colleague casting directors are posted publicly. Pilots, episodics, major studio films, and high-paying regional theater breakdowns are sometimes released to talent representation directly. In these instances, there rarely is an electronic submission process for the actor on high-revenue earning projects learned via the actor-grapevine. But…there will always be a brick-n-mortar mailing address for a casting director. Aggressive actors know this. Lazy actors take themselves out of the consideration game thinking they have no way to reach a casting office if an email address is not present. At Paul Russell Casting the lack of actors self-submitting themselves to our projects has given rise to our being forced to see more agent-submitted actors.

Are actors being shortsighted in not using land mail to make casting and talent representatives aware of their existence?

Jebens was the most candid in response. “When there are so many people hacking and sending out viruses, I don’t understand actors thinking that we would open something from a stranger. So yes, they are very presumptuous to email agents.”

Cassara is nearly equally adamant with candor. “I run a paperless office… [but] I believe paper mail is the smartest tactic an actor can use to promote himself or herself and, by not sending hard-copy updates, actors are being a bit shortsighted. We’re all still figuring out the digital revolution and there are many tasks for which digital solutions are just not evolved enough (yet) compared to their “analog” predecessors. Sure, I can receive electronic submissions with ease but will I actually give each and every one of them the same attention I pay to paper submissions? Not usually.”

Riley responded that she, “Personally enjoys the part of my day that is opening the mail and looking at the pics/resumes. I would probably answer that it is smarter [for actors] to use land mail.”

Melamed displays his respected business acumen in his response. “Part of the actor’s job is to market themselves; they have to build that cost into their infrastructure.”

So email or land mail? Which is best for an actor to leverage in promoting their professional existence? Which benefits better visibility? What would our insiders prefer actors do in their outreach to them?

Riley prefers, “Shameless self-promotion. Send us materials; write when you have something to say. Focus on getting work for the sake of working and having a job, not so you can gain an agent.”

Jebens, whose history in entertainment is vast, knows there is no bullseye solution. “If I had the answer to that, I could put it in a book and make a mint! I am always looking at the [land] mail and I am invited to many seminars. I do the best I can to pay attention to every place I go.”

While your competition has forsaken land mail, empty inboxes have become prime marketing real estate for your materials to be opened, reviewed and considered with little competition as distraction. Isn’t being one among one via land mail better than being one among thousands in an email inbox list?

Get to know your post office again—while you continue digital outreach. Don’t ignore one for the other. You have two visibility options to leverage simultaneously. Your obscurity or visibility is created, determined, and managed by one individual: you.

Paul Russell’s career as a casting director, director, acting teacher, and former actor has spanned thirty years. He’s worked on projects for major film studios, television networks, and Broadway. Paul’s taught the business of acting and audition technique at NYU, and speaks at universities including Elon, Yale, Temple and the University of the Arts. He is the author of ACTING: Make It Your Business – How to Avoid Mistakes and Achieve Success as a Working Actor. For more information, please visit www.PaulRussell.net.