Women are Crazy because Men are A**holes 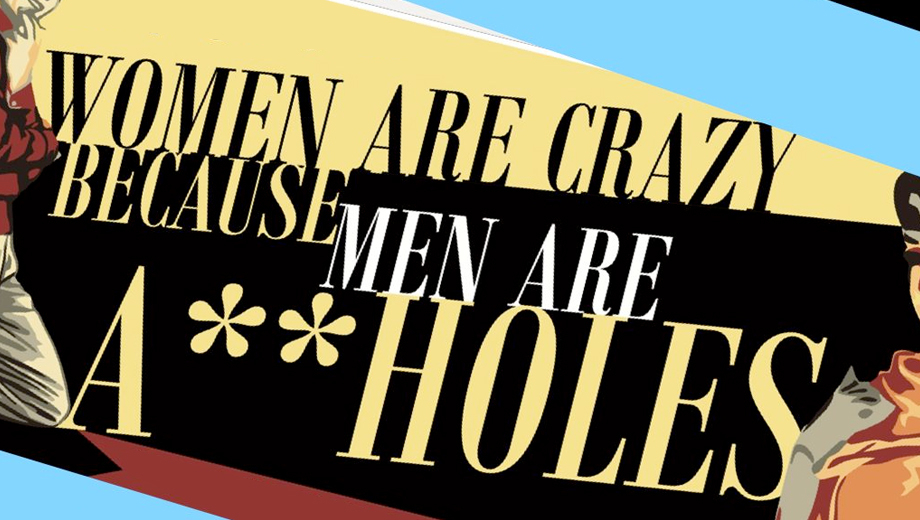 It’s got a catchy title: Women are Crazy because Men are A**holes.  It’s got some nice buzz going on around town… shows are selling out and the run has been extended.  These things should add up to a really fun show, I’d say.  How can all the signs be so right and everything be so… wrong?

This isn’t Women are Crazy…’s first time at the rodeo.  There have been previous runs, in Los Angeles, in Chicago, possibly elsewhere… and now it’s back to LA LA Land once again for your viewing pleasure.  And despite my rather strongly worded statement above, this show does provide some pleasure.

First of all, the audience was on fire.  I call this a bonus.  It’s not often an audience is giddy before a show begins, and the one I was a part of, was.  It’s always exciting to be part of an enthusiastic group.  First up, we see Mandy (Courtney Campbell) with mascara running down her face, towering over Benny (Christopher Powers) in bed shrieking with accusations of infidelity. As she loses her bananas, he quickly reminds her they broke up.  Then, we are introduced to three more equally screwed up couples in various stages of relationship.  They are all attending a brunch at Nicole’s (Nicole Callahan) house with the purpose of meeting her latest potential soul mate, Dylan (Christian Monzon) whom she met online and is flying in from Chicago for the first face-to-face meet up.  Needless to say, it doesn’t go well.  We meet the older rich Reynold (Blake Boyd) with the gorgeous, younger, and not really interested in anything other than his money, Bella (Christine Donlon).  There’s George (Baxter Defy) and Hillary (Jessa Zarubica) who broke up a few days ago and can’t get past their own craziness long enough to get out of the car to make an appearance. And last but not least we have Tim (Brian Drolet) who is being left by longtime girlfriend Phoenix (Nikki McKenzie) to pursue her dream of writing children’s books of which he was not a big supporter.  The brunch is a disaster, so-and-so ends up hooking up with so-and-so and he likes her instead of her, she ends up getting back together with him, and they break up… and so on and so on.  I don’t want to wreck all the really deep moments (is there a sarcasm indicator I can use?) so I shall remain in the vague.

This isn’t high art, but the title doesn’t suggest it… and there is plenty of room in the theatre for light-hearted fun.  Unfortunately there is a lot to endure to find the fun.

I rarely care much either way for set and costumes.  I’m not wooed by a beautiful set… and not dismayed with a simple one.  The same could be said for costumes. This may be my first experience in being extremely annoyed and distracted by both.  There was a car depicted by a couple of chairs, a wheel and some sort of non car-like wood structure.  I had no problem with this.  What I did have a problem with was the elementary school-like design of red/orange and a bit of yellow… EVERYTHING.  I can’t remember anything, including the backdrop, dresses, shirts, towels, bed blankets, etc, etc, etc, that weren’t one of the three colors.  With the exception of some wood (YAY for the car) and denim on a few men’s bodies here and there, it was all red/orange/yellow.  Holy Moses… the set and costumes insulted my intelligence.  There is a serious and sweet children’s story that is told in act II about (can you guess?) apples and oranges.  The story didn’t work within the context, and it didn’t make me like the red and orange set and costumes.  End of discussion.  “The Crazy Assholes Ensemble” takes credit for wardrobe and set design.  I guess that’s all I needed to say.  Scratch the previous superfluous sentences.

This show appears to be double cast.  I’m guessing the A-Team was the opening night cast.  They are notated with **’s in the program.  About half of my cast was opening nighters and the other half, not.  I can’t exactly say that the **’s were good and the non **’s were not.  I also cannot say that these funny folks are without talent.  I can say, however, that I was sometimes amused, or more accurately stated, had a love/hate relationship with the first act (about 30 minutes in length… why, then was there an intermission?), which dissolved into mostly hate in the second act.  A chief reason for this could have been an astronomical amount of yelling.   There is a rule in comedy: “Louder.  Faster.  Funnier”.  This production takes the “louder” aspect and runs with it.  I got awfully tired of all the yelling.  Brad T Gottfred, director, needs to get back to the run-away show and rein them in.  Perhaps it’s been like that from the get-go.  Whatever the case, the constant yell delivery of lines needs to stop.  Brad T Gottfred, writer, deserves a pat on the back.  The script is the best aspect of the production.  It’s pretty stinkin’ funny when you get past the other stuff.

The real stars here are the Publicity (Michael Sterling and Assoc.) and Marketing (Joanne Mosconi) folks.  I’m not sure the buzz could be better… and the show is selling out all the time.  Audiences are pumped and ready to roar.  A rare experience in Los Angeles.  And from what I can tell, they seem to enjoy it.

I say:  You’ll laugh.  You’ll cry.  And it’s better than a bad production of Cats.