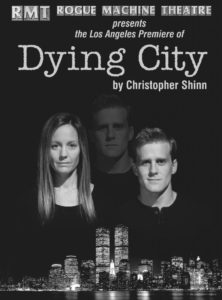 Have you ever gone on a date with someone, who was truly the perfect person on paper, but in reality just wasn’t a match? I found this experience to be frustrating in the dating realm, and now, perhaps, even more distressing in the theatre.

The Los Angeles premiere of Dying City by Christopher Shinn, directed by Michael Peretzian is currently running at Rogue Machine Theatre through July 8th. There is a whole lot of good in that last sentence, wouldn’t you say?

Christopher Shinn is an award-winning playwright. Like, on a grand scale ala OBIE winner and Pulitzer Prize finalist. (Yes, that counts in my book.) He’s known as provocative and probing American playwright. What’s not to love?

Rogue Machine Theatre is one of my favorite small theatres in Los Angeles. I’m not the only one who feels this way, apparently. They’ve won awards from LA Drama Critics Circle, LA Weekly, Ovation and Garland awards. A consistently good spot to see theatre.

Michael Peretzian, director, can also hold his own in the award department as well as possessing a fine resume. He’s no schmuck.

It’s a Los Angeles premiere, but this isn’t Dying City’s first time at the rodeo. This show has been produced multiple times in major cities on the East Coast and had its premiere at the Royal Court Theatre in London, 2006.

There is a strong plot with clever theatrical devices. It’s July of 2005… and January of 2004 (I’ll explain later) a couple of years after the US entered the Iraq war, in lower Manhattan. Peter (Burt Grinstead) arrives unannounced and more-than-unwanted at the apartment of his one-time sister-in-law, Kelly (Laurie Okin), now the widow of Craig, Peter’s identical twin. Craig’s death while serving in Iraq had been suspicious from the get-go, with a possibility of the cause being suicide. Kelly had been handling her grief by heading deeper into seclusion (in fact she was in the process of an unannounced move) and Peter’s continued attempts to reach out to Kelly went entirely ignored. Until this night. This three-character drama is explored by a compelling cast of two in 90 minutes.

The rather flamboyant gay brother Peter and fairly stereotypical military husband, Craig is ably played by Mr. Grinstead. We have Peter’s surprise visit in 2005, and the flashback evening before deployment with Craig in 2004… fitting as his memory certainly wasn’t dead. The turmoil of all three serves as the theatrical fodder. Interesting, no?

It’s challenging work. The topics covered reach further than the expected posttraumatic stress disorder and the validity of the Iraq war. Grief… and violence NOT found in war but in the home. This is the violence that this piece takes by the horns and wrestles with. What are the implications for the children raised in violent homes after they become adults? And what are the implications for those who love them, or simply cross their path?

The set (Tom Buderwitz) was perfectly simple and appropriately bleak. The lighting (Leigh Allen) was just the right amount of dramatic for this drama… so then what? Why isn’t this show a masterpiece?

The actors and the director were more than admirable. They certainly “did right” by the piece, so to speak. I’m intrigued by the playwright… he’s unknown to me, but from what I have read, has potential to be one of the next great American voices. He dares to be a “political playwright” and we should have more exposure to him here in Los Angeles, where his shows have been largely ignored. I’m interested in more theatres being willing to put up his intense and intimate plays, which is what he’s known for. This emotional piece just didn’t totally hit home with me. I didn’t care enough about the characters, which is deadly for the success of the piece of course. But I don’t blame the actors and I was more than interested in the plot/themes. I had a hard time finding anything redeeming about the military husband… I was ready to stand up and say, “Good radiance. She’s better off without you.” Unfortunately I’m not sure I cared much more for the gay twin brother or the mourning psychotherapist wife. My clumsy conclusion is that the script is flawed. Not tremendously, but flawed nonetheless.

It was certainly intriguing enough to want to know more about the playwright… and hasn’t changed my high opinion of the Rogue Machine Theatre, either. In fact, it wouldn’t stop me from recommending you check out the show. I’d actually like to know if YOU cared enough to call it a success.

Like any dating situation, it’s easier to blame the other person for the non-perfect match. Maybe I was the problem. It could have been me. Perhaps it would be a perfect match for you.