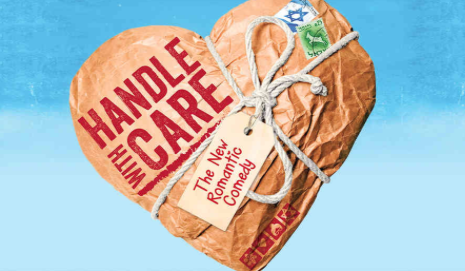 You may or may not find it hard to believe that some people (ok, maybe it’s a lot of people) seldom go to the theatre.  Perhaps only once a year.  The holidays have a way of encouraging people to gather their families to get out and enjoy the Arts.  There should be a plethora of holiday themed shows opening right about now…beckoning your attendance.  You will have some classic options where you’ll likely be able to recite or sing along with the actors on stage, there are always some choices available that are more edgy and irreverent…and there may be one or two like the current option at The Colony Theatre, that could be just right for you.

First of all, it should be said that Handle With Care is a “sort-of” holiday show. The story opens in a dingy hotel room (set design, David Potts) in Virginia on Christmas Eve, with a woman by the name of Ayelet (pronounced “I yell it,” Charlotte Cohen) ranting at a bumbly and confused local DHX delivery guy named Terrence (Jeff Marlow) in Hebrew for losing her grandmother’s body while in his transport care.  He, not exactly being the DHX A-team being that it was Christmas Eve, had been assigned the job of delivering the coffin to the airport when he stopped for gas and snacks.  He left his keys in his truck, and the truck (not to mention grandma) was stolen.  He couldn’t understand the Hebrew rant, so he called his Jewish childhood friend Josh (Tyler Pierce) for help.  Josh didn’t end up being the translator extraordinaire… the best he could do was recite a prayer he learned for his bar mitzvah, give a random word here and there, and deliver a dirty phrase any young boy is bound to learn. Turns out, Josh was more importantly able to lend support and sound reason to the precarious situation.

The story skips back and forth between Christmas Eve and the previous day to reveal Ayelet’s grandmother Edna (Marcia Rodd) not only brought her granddaughter on vacation to America to ease her depression over a recent breakup, but had a heartbreaking reason of her own to be there.  To search for the love of her life that was a forbidden relationship started over 50 years earlier.  Josh also had heartbreak of his own… he was still dealing with the loss of his wife who passed away in a car accident 18 months earlier.  After learning Edna’s beau had recently passed, she also passed in her sleep, leaving Ayelet and Josh the divine opportunity for their broken hearts to find healing… and possibly love in each other.

Let’s just say it now… this is a very sweet, lovely, predictable show.  This is not earth-shattering theatre.  Although there are no surprises, there are some very fine (!) performances.  The director (Karen Carpenter) moves the show along at a quick pace and there are plenty of giggles to be had.  Jeff Marlow is pretty hilarious and lovable.  Tyler Pierce could be case study for acting students.  On the other hand, the play calls for a little suspension of disbelief… Ayelet’s comprehension of the English language accelerates at a miraculous pace.  And you will always be three steps ahead.  Yes, yes.  But this charming West Coast premiere, written by Jason Odell Williams is right and extremely enjoyable for the right person/family.  If my parents lived in Los Angeles, I’d bring them to The Colony in a heartbeat.  This show could be called the best Jewish Christmas play of the season.  There are plenty of reasons to go.  I’m guessing it’s clear if this heartwarming, feel good experience is for you and the people you love.  If so, go.