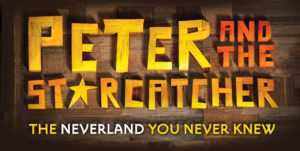 Peter and the Star Catcher

Who doesn’t love Peter Pan?  We all know at least a bit about Neverland, the Lost Boys, Captain Hook, and Tinker Bell.  I make it a point of hopping on the ride at Disneyland every time I go, so I must qualify as a semi-fan at the very least.  Peter and the Star Catcher, the Tony Award-winning theatre extravaganza by Rick Elice (based on the novel by Dave Barry and Ridley Pearson), is still playing a few more weeks at the Ahmanson Theatre in Los Angeles.  I’ve heard it thrown around that this is “Peter Pan for adults”… I’d say that’s a bit off.  This show cleverly addresses the back-story of the much-loved Peter Pan… and how he (as well as his co-horts) came to be the much-loved “boy who wouldn’t grow up” we know him to be.

This show isn’t precious about the beloved Peter Pan, which I appreciate.  Be ready for a light comedy with ample fart jokes.  Keep the kids under 10 or so, home.  There isn’t the big, sparkling set with ships and crocodiles to gawk at.  This production does a lot with a little… and a little imagination.  Fitting, don’t you think?  The use of rope and toy ships passed from one person to another, tableaus and human bodies for doors may give you the idea.  There are two amazing musicians/foley type guys who really add to the experience and 12 ensemble members play a whole heck of a lot more characters than that during the evening.  And they pull it off.  A LOT of style is involved in this show.  Directors Roger Rees and Alex Timbers with movement guru Steven Hoggett should be commended.  There was no detectable disappointment to be found in the audience for lack of pizzazz or spectacle.  In fact, I think it could be said that the production may have MORE style than substance.  Possibly a problem for me… not necessarily a problem for everyone.

The ensemble was to die for.   I love a good ensemble.   Favorites include: Joey deBettencourt as Boy (or for the second half, Peter… then Peter Pan), Megan Stern as the star catcher in training, Molly, and John Sanders as Black Stache.  Los Angeles theatregoers will be talking about his hilarious “omigod” monologue for a long, long time. But as you know, I have a strong belief that the ensemble is only as strong as its weakest link… and there was no such thing in this production.  Well done, Jim Carnahan, CSA and Jillian Cimini.

I’m noticeably not going into the meat of the plot… as it’s the whole purpose for seeing the show.  It answers the, “how did he?” and, “why did she?” that’s been plaguing you since childhood.  And that’s the fun stuff.

I absolutely enjoyed the show.  You will, too.  But I wouldn’t be doing my duty if I didn’t put on my critic hat for a second.  So here’s the hard truth: The first thing I did was to compare Peter and the Star Catcher to  the “back-story” musical exploring the Wizard of Oz.  Unfortunately, it doesn’t compare.  So, the bad “Star Catcher” news nut shelled: Wicked was better and the style may out-shine the substance.  But if theatre patrons nixed all shows from their agenda that weren’t “the best”… theatre would certainly be extinct by now.  It’s a lot of fun.

You may feel like you’ve had your quotient of entertainment for the season, but if you missed Peter and the Star Catcher in December, you still have a few more weeks catch this show—and you really should.  You’ll feel like you got a bedtime story and a kiss as you leave the theatre.