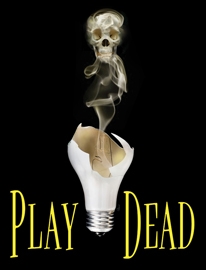 There are two main reasons I go to the theatre.  The first is to become enlightened.  Theatre has an amazing way of illuminating truth, provoking new or deeper thought, or simply educating the audience.  The other reason I go to theatre is for sheer enjoyment.  I like to be entertained as much as the next guy.  I enjoy leaving the craziness of Los Angeles for an hour or two to be fully immersed in something else.  Preferably fun.  These two things rarely collide and that’s ok.  I don’t really expect them to.

Play Dead, currently running at the Geffen Theatre on the Audrey Skirball Kenis stage, is a great escape from the carols and the crowds you’ll soon (if not already) be inundated with.  Written by Todd Robbins and Teller, it’s a different kind of show than you would normally see at the Geffen.  It originated off Broadway at the Players Theatre; inspired by the tradition of the American Spook Show… something I’d never heard of before.  Apparently many moons ago when vaudeville made their homes in movie theatres, an out of work magician thought the same plan might work for him.  Teller, not only the co-writer but director as well, hopes Play Dead will be an artistic version of the genre, mulling over death and horror.  I say it’s an evening of spooky story telling, magic tricks, mind reading, and raising the dead.

This show is an audience participation show in every sense of the words.  Todd Robbins serves as the master of ceremonies/storyteller/magician/entertainer and regularly asks for audience responses and on more than a few occasions, plucks people from the audience to pull them on stage.  I happen to have a major phobia of this.  I love theatre, have loved being an actor in theatre, HATE being pulled up on stage as an audience member.  I can’t tell you why.  If you share this same fear, it doesn’t mean you have to skip the show.  It’s highly likely that someone will come and talk to you before the show begins about a thing or two… and I suggest that you bring up the fact that you are painfully shy (or however you want to say it) and you won’t be bothered.  If being singled out of an audience or pulled up on stage is a dream come true for you, you have a decent chance of living that dream.

I am choosing to refrain citing the specific events of the evening, beyond what I’ve already disclosed.  At the end of the show, Mr. Robbins kindly asks the audience members who participated in the fun not to give away how he managed to pull off such feats, so as not to ruin the experience.  I will take it a step further and keep the specific experiences to myself.  I can say the unmentioned experiences are enhanced significantly by a dark and cluttered set (Tom Buderwitz) and creepy sounds (Cricket S. Myers).  The Magic Designer (Johnny Thompson) and Illusions Engineer (Thom Rubino) must have been amazing, because I couldn’t tell you what they did.

If you want to make the most of patronizing this show, I’ll give you the big tip beforehand:  Participate.  I realize I may seem a bit hypocritical (i.e. my phobia of being called on stage) when I promote the concept of participation in theatre, but I’ll do it anyway.  Play Dead is an easy example of the responsibility the audience has to participate or “buy into” theatre.  When you walk in the doors with arms crossed searching for proof that what you are about to see isn’t real (and I’m speaking metaphorically as well as actually, in this case) then your experience will suffer.  Significantly.  The same goes for standard plays.  As theatergoers and supporters, we need to do just that.  Support.  Lend the production, whatever that may be, your initial participation in buying into the story… into the world of the show.  And your experience, the performers experience, and the experience of the people around you will be richer for it

Go take part in getting a little spooked this holiday season.  You won’t regret it.

Tickets $57-$87 or avail for less on the typical discount sites.