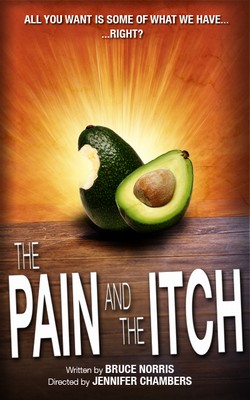 The Pain and the Itch

I’m going to try to keep this short and sweet.  Why, you ask?  I’ll tell you later.

I’ve learned a few new things about myself after watching theatre in Los Angeles over the last year or so.

The first thing is that I really like playwright Bruce Norris.  He’s the guy who won the Pulitzer Prize for Clybourne Park… and also took home the Tony Award for best play.  But that’s not why I like him.  I’m sure it’s a good show; I just haven’t seen or read it.  No, I like Bruce Norris for two other plays that I have recently had the opportunity to see in Los Angeles.  Parallelogram is one.  Remember that?  It was at the Taper a little while back.  And now for The Pain and the Itch, currently running at the Zephyr Theatre in Hollywood.  And those weren’t even his quote unquote BEST!  Where do I sign up for Clybourne Park?

The second thing is that I, generally speaking, like the stuff that comes out of the Steppenwolf Theatre in Chicago.  Bruce Norris has an ongoing collaboration with Steppenwolf… but he’s not the only reason I like Steppenwolf shows.  How about August: Osage County?  That was running in Los Angeles in the not too distant past and that’s a good ole Steppenwolf show by Tracy Letts.  Surely I can go on and on with other examples.  But let’s get back to the show of the moment.

The Pain and the Itch.  That’s the play that I’d like to tell you to go see, without telling you much about it.  I’m concerned that the traditional obligatory synopsis will give you the wrong idea of the show…or far worse, leave you uninterested to the point of skipping the show, which I do not suggest.  So let’s leave it at: The Pain and the Itch, a story about a privileged couple with a beautiful daughter and a newborn that gathers their family for a Thanksgiving dinner, which takes an ugly turn.  That sounds pretty uninteresting to me.  So I’ll keep going.  Not with plot, but with other stuff.

This show is about the personal and the political.  It’s funny and thought-provoking, and terribly dark.  And if you are the type who needs to know where this is going, you aren’t going to know.  And it’s good for you.  I love that TPATI is unafraid to point out the ridiculousness of the liberal left, who many of us identify with or actually identify ourselves as.  Race, class…those topics are covered too.  It’s a wee bit shocking.  It’s topical.  It’s good.

I think the cast is solid.  Joe Holt (Mr. Hadid), Eric Hunicutt (Clay, the husband), Beverly Hynds (Kelly, the wife), Kiara Lisette Gamoba (the daughter on the night I watched), Trent Dawson (Cash, the jerk plastic surgeon brother), Beth Triffon (brilliant as the young Eastern European girlfriend to Cash), and April Adams (Carol).  The director, Jennifer Chambers, set a good place for the quippy dialogue and did a good job with a small stage and plenty of actors.

I want to keep this short and sweet, because I don’t want to say anything to discourage you from seeing this show.  It isn’t brilliant.  It isn’t the best thing I’ve ever seen.  But I think it’s good theatre.  Good simple theatre.  It isn’t in one of the big houses, and that is exciting.  Los Angeles can use a better, thriving, higher quality small house theatre scene.  This show is good, and a sizable step in the right direction for small, independent theatre in LA.

The Pain and the Itch

$25, or tickets avail on discount sites