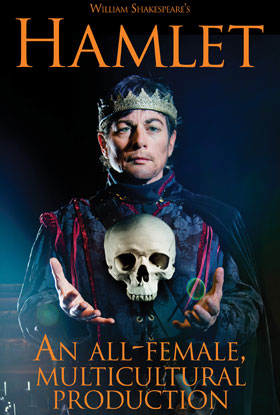 To go, or not to go: that is the question.

Sorry, that’s a terribly corny intro to LA Women’s Shakespeare’s Hamlet, currently running at the Odyssey Theatre.  But that is the question at hand, isn’t it?  The question purposed doesn’t have an easy… or maybe more accurately stated, clear answer.  To go, or not to go: That is the question.  Answer: Yes, or eh.  Maybe.  Probably.

I don’t feel the strong need to give you the play-by-play synopsis of the story of Hamlet.  You all know this is Shakespeare’s tragic revenge play.  There is betrayal of trust, moral destruction, lust, madness, and incest, murder… and by the end, just about everyone is dead.  If this is a spoiler, I may need to know what rock you grew up under.

The Los Angeles Women’s Shakespeare Company has been around for twenty years.  They have an impressive list of shows performed with their signature all-female casts.  Whether or not you think that is particularly interesting (after all, in Shakespeare’s day, his plays were performed with all-male casts) you may want to see this show for one reason alone: It’s their last show.  And they are a pretty impressive group.  It’s your LAST chance.

If the LAWSC isn’t enough reason for you to head over to Culver City…let me give you a few more reasons.  It’s got some talented actors.  Quite a few, actually, with a few mediocre performances making an appearance as well.  Why is this important, beyond the obvious reasons?  It makes the iambic pentameter and somewhat odd Shakespeare language and general hoo-haw all so much easier to understand.  If this would be your first time seeing Hamlet, I could certainly recommend it to you.  Keep a lookout for Lisa Wolpe, playing the title role.  Yes, that was meant to be funny, but in all seriousness, she’s a pretty fantastic Hamlet.  Kimberleigh Aarn as Horatio and Cynthia Beckert as Laertes were also amongst my favorites. The show runs about 2 ½ hours with intermission, which is great news.  Hamlet has been known to be 3-4 hours and nobody really wants to sit through that.  No matter how gung-ho you are on Shakespeare.  So hear me say now, this is a really good production.

So what’s my problem?  Well…I believe this production of Hamlet could have been a better show had a few things been different.  My key complaint: The co-directors were actors in the play.  Lisa Wolpe (Hamlet) and Natsuko Ohama (a very fine Polonius) were the heads of the ship as well as actors with significant roles.  A big undertaking, certainly.  A mistake, absolutely.  When the goal is to serve the play in the best way possible, I find the decision to wear two gigantic hats (lead/major actor and director) the wrong one to make.  Even with co-directors.  There are other great actors and other great directors in Los Angeles, in fact, a plethora to choose from.  I also question the choice of Hamlet be twice the age of Ophelia (Chastity Dotson).  Obviously this production is full of non-traditional casting.  I walked in the door buying the world of females playing the male and female roles.  Cool.  But the much older Hamlet/younger Ophelia took me out of the scene each time they were in physical proximity of each other.  Too much suspension of disbelief required.  I reached my limit.  Perhaps it was an issue with the staging (ahem… director) but the set didn’t do it for me, and neither did the costumes.  Both aspects had obvious time and attention paid, it just wasn’t as successful as I wanted it to be.  It was a bit amateurish.

Oh, my standards were high for this one.

In the end, a self-serving production with the best intentions, effort and passion…is still a self-serving production. And this was the case.  But it’s a darn good show.  And despite the fact it could be better (and what production can’t be better?) you really should race to go see it.  Good Shakespeare in Los Angeles is a treat and this production of Hamlet is worth seeing.  I amend my answer to the opening question.  It’s a yes.  We will stick with yes.