Alek Friedman feels blessed to have technical skills in addition to creative skills. Computer programming on the one side, while acting on the other!

Alek Friedman is a very versatile person, which is a perfect attribute for any good actor. Alec was born and raised in Moscow where he had a dream to become an actor. He got the acting genes from his father who was a stage actor for over 25 years, and from whom he got the opportunity to perform a small part in a feature film at the Gorky Film Studio.

When Alek moved to the States however, he had to get a “real” job and his dream to become an actor had to be put on hold. He went to the Santa Monica College and then later transferred to Cal State University Northridge and in 1998 he opened up his own business in Computer Services. Since 1998, he has been servicing the LA County area in database programming, website development, graphics & Photoshop design, MS Office products tutoring & consultations.

During his time as a professional computer support specialist, he never let go of his dream as an actor. When he met a girl who worked at Central Casting, he immediately made himself available to get on set as a background actor for a couple times a week. Alek says that, “The first day as an extra – on a TV show “7th Heaven” – was one of the happiest days of my life! The dream of being an actor, even as an extra, has come true! Thanks to my flexible part-time schedule, I was able to work another day (or two) a week in films & TV shows as an extra, which has given me incredible knowledge and understanding of the entertainment world.” 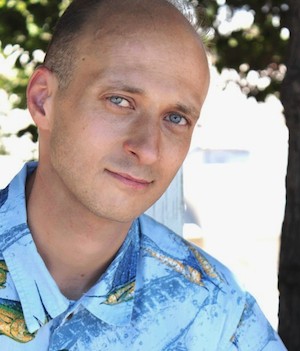 Since then, Alek has become a SAG-AFTRA member and has been working in Film, TV, Features, as well as Commercials. Though most of his acting work consists of voiceover jobs (Looping, ADR, Dubbing, Narration, etc.), the short film “Karaganda” that he had a supporting lead role in is making its festival rounds in New York as well as Italy and Bulgaria, and just showed at the Hollywood Chinese Theater on May 31st. He is still working as an extra whenever he gets a chance. He also has a 33-year-old “period” hard-to-find car, that has landed him a lot of TV and commercial jobs, where he has also performed many principal roles.

When Alek has free time, he plays music, which is his everyday passion. He plays piano, guitar, drums, xylophone and he sings, writes songs, and produces music.

Aside from working as an artist and as a tech specialist, Alek brings sustainability to his work as he works from home and doesn’t commute, which is also part of his health strategy, being car-less and walking and riding to many places. He also shops more frequently at local farmers markets and makes sure that he buys locally-grown produce whenever he can, which not only contributes to his own health but also to the health of our local businesses and our environment. 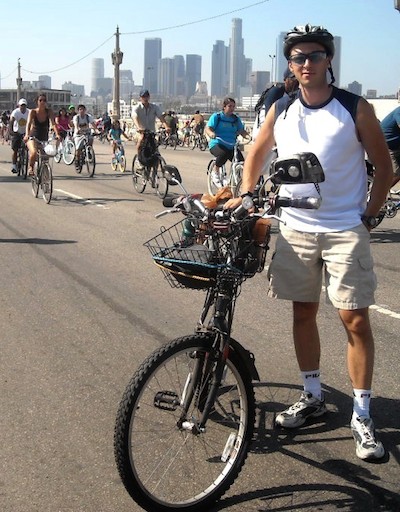 Alek is also an advocate for smart growth in the urban environment which is how my husband and I met him many years ago. Alek comes from a big city that has a superb public transportation system and beautiful parks and public spaces for its residents. When he moved to LA, he realized the many benefits (including health, environmental, and financial) of NOT driving, and joined numerous advocacy groups that promote transportation improvements and sustainable urban development. He is now a member of The Transit Coalition, So. California Transit Advocates, RailPAC, NARP, as well as some local bicycle organizations. Alek says that “the myth (or rather – propaganda) that “Everybody drives in LA” is falling apart—fast! In fact, when I go to auditions, I try to avoid driving. Not only does driving gives you tons of unnecessary stress and premature wrinkles , but you will have a lot of anxiety, preventing you from focusing on the upcoming audition. I cannot even describe how many times I’ve seen actors at auditions thinking not about the script, but about their parking situation and their meter about to expire!” His advice to actors is “to hop on a bus, or take the subway (depending on the audition location), and…completely forget about everything but the audition and script. Practice, rehearse, and arrive at the audition totally refreshed! If an audition is in Hollywood / West Hollywood area, just ride [your] bike there.” In addition to being part of these many organizations, Alek is actively involved in improving our public space in the community by advocating for a pedestrian-friendly and family-oriented environment, and he has written numerous articles for LA Streetsblog and other local news sources.

I find it truly refreshing to see actors involved in their communities and in sustainability issues because I do believe that as actors we have to be responsible about what we do as the world is watching us. Once an actor makes it big, the past is going to either haunt us or benefit us, so why not do something great for our society, that will inspire others to do good.

If you have a second career, please email me and I will feature you in one of my upcoming articles. Please put in the subject line: “Actor/Actress with a Plan B”. Tell me your name, what you do, how long you have been doing it, and please include a photo of you  (at your Plan B job) and a link to your acting and Plan B website. 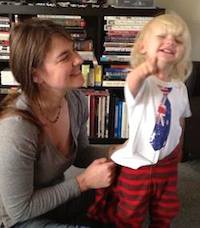 Enci is a Mother, Actress, Artist and Activist (MAAA)