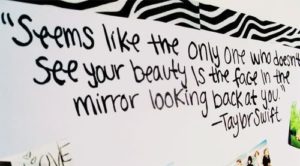 A problem cannot be solved by the same consciousness that created it.
–Carl Jung

An externally beautiful girl I hung out with years ago, told me she would have never married her rockstar-husband had she not gotten a boob job. I was like, “So he married your breasts?” They are now divorced.

When I first started filming TV commercials, a make-up artist stopped applying foundation to my face to tell me I should get rid of the mole on my cheek if I wanted to work more. I was appalled, to say the least! What she saw as an imperfection, I saw as a beauty mark. I continued to work. 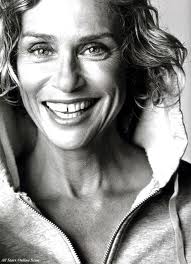 Lauren Hutton tried using mortician’s wax to cover the gap, cutting a line in the middle of it. Then she used a cap, which she would often swallow, laugh out, or misplace.

“Revlon wanted me to use it all the time, and then the construction workers would yell at me in the street, ‘Hey, Lauren, why did you fill in your space? We don’t like you anymore!’ She says. “So I would turn and give them a great big grin and they would cheer.”  She’s been touching lives for decades.

Is plastic surgery a caving to society’s standards of shallow perfection? I suppose it can be, depending on the decision that makes one go under the knife? I don’t know, but what is shallow, is that society, which is the majority, created this false belief that as your number (your age) increases your beauty decreases and we, the majority, bought into it and Hollywood became a victim to IT.

What baffles me is why everyone wants to look the same, when God worked so hard to create everyone so uniquely different?

I see imperfections as God’s way of signing off on His masterpiece.

So, to redo God’s work, never made sense to me, maybe, because, deep down, I didn’t want this story, humorously shared by Joel Osteen, to be my encounter with God…

A very rich woman in the hospital in intensive care dies for a few seconds.

She sees herself leave her body in a near death experience and meets God in Heaven. “Is that it?” she asks Him, “Am I dead?”

She recovers in the hospital and is well again. She is so cheerful that she decides to improve herself. She gets plastic surgery done on her face, gets her hair restyled and dyed a different color, gets a new set of stylish clothes and looks terrific, once again.

A few days later she is hit by a bus and killed instantly.

When she meets God she complains, “I thought you said I’ll live for many years yet!”

He replies, “Sorry, I didn’t recognize you after the makeover!”

I am not opposed to plastic surgery, people go under the knife for medical reasons or personal preferences all the time; but before I’d make that choice, I would first ask myself, “What am I really afraid of facing?”

I do believe this is why there has been an outpour from the media, candidly giving their opinions about actors who go under the knife. I don’t see these comments directed at the actors so much, as to those giving their opinions. It feels like, we as a society can’t bare to see one more person change their face, when in reality it is our media that needs to change face.

A problem can’t be solved by the same consciousness that created it.

“Conscious aging is a new way of looking at and experiencing aging that moves beyond our cultural obsession with youth toward a respect and need for the wisdom of age,” explains Stephan Rechtschaffen, M.D., “Instead of spending billions on walling off the aging, spend more to improve the quality of life among the aged.”

What ignorance has unconsciously accepted, wisdom questions, “What will it take to see that which you’re really in fear of facing has nothing to do with your face?”

I have feared facing my number, even though I have said over and over age is just a number: I often attract a younger man with an older soul. It doesn’t matter that we share mutual interests, our hearts speak the same language, our minds are liked and our bodies share that rare intimate chemistry, until he knows my number…I live in a sweat lodge! I understand my number could have him packing his bags, taking the next flight in search for a younger number!

I’m learning not to take this personally…I get it…I also get outer beauty fades when inner beauty forgets where she lives.

So…if age is just a number, then why doesn’t everyone put their real number on dating sites?

What you reflect out into the world doesn’t come from the appearance of your face; 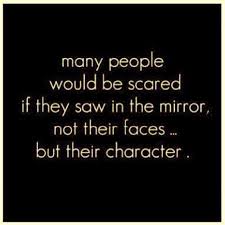 it comes from facing that which you fear facing; your true makeup; your character.

Character is what you are in the dark.

Character is not just what you put into your lives, but what comes out of your lives, your mouths, your actions. Your true character shines in the dark, when no one is watching, when you’re facing your darkest hour.

There was this profound moment, when I looked long and hard in the mirror, after a man I reconnected with, who did more amazing things than any man to gain back my love and trust, looked at my face after a lovely day of horseback riding, to tell me, “You have more wrinkles than me.”

I had no idea why he felt this would be a wonderful way to end our day at the ranch? If I were still saddled up, I would have galloped off!

Instead, I sat in his perception of me; my ego was bruised and all of my past insecurities come rushing back to my face.

I didn’t see what he saw, not that I was in denial, but I saw beyond my face, that which took years for me to look into before a Pretty Pink Heart outlining my face reflected back in my mirror, years before I could look into my mirror and say, “I Love you,” not to my face, but to my Spirit, hidden behind my face.

He saw my face that wrinkles, I saw my soul that never wrinkles.

Eyes that lust for exterior beauty, is fleeting; eyes behind the face, is beauty you marry.

What if we face change by putting our character under the knife?  It would be the best facelift Hollywood ever saw!

Imagine if we, as a society, looked at the aging process as gaining a new look rather than loosing the old? If this scares you, than maybe this is the wrinkle in your character that needs reconstructive surgery?!

Looking my best, staying healthy, fit and eliminating stress the best I can, has been an inside job.

Meditation feels like I’ve discoverd the fountain of youth! Knowing there is something greater than myself guiding my steps keeps me in awe of life with a childlike curiosity. I have changed my eating to organic, started daily juicing, changed my exercise to Pilates, put my sleep as utmost important, and opened my heart to receiving all things possible.

It was not easy growing up believing IT was all about external looks, IT was a learned behavior. Instead of questioning IT, I prayed each birthday came with reigns I could pull back on instead of celebrating the race horse making it across the finish line!

A wise friend once told me, If you don’t accept your age in your thirties, you will be wishing, in your forties, that you were thirty again. Same is true if you don’t embrace your forties, you’ll be blowing out fifty candles wishing there were only forty; God forbid the day you roll into your sixties, seventies, or eighties!

Instead of celebrating getting better, you’re worrying about getting older.

The entertainment business will either break you or make you wish you never got into it! IT broke me down so much that I was finally able to see that which was beautiful wasn’t me, but that which was shining forth from me: my smile, my laugh, my attitude, my positive approach to life, my awareness, my strength in my weaknesses–my character.

You can change your face as much as you like, but if you don’t change first what’s inside, then no mirror will give you what you are looking for, because what’s staring back at you isn’t your face, but how you face yourself.

Here’s the real beauty, your character never ages, if anything the freer you are of your exterior face, the more youthful your outer appearance.

When you become aware of the beautiful character hiding behind your face, Hollywood will have no other choice but to change face.

We have to be able to grow up.

Our wrinkles are our medals of the passage of life.

They are what we have been through and who we want to be.

I don’t think I will ever cut my face, because once I cut it,

I’ll never know where I’ve been.

ASK ME A QUESTION & I WILL ANSWER!
GO to Questions & Actors, Click LIKE and start communicating with other actors and parents!
Please post on Questions and Actors
Karen Ann Pavlick started her career as an NFL CHEERLEADER for the Raiders. This led to an acting career and first film, PATCH ADAMS with Robin Williams, directed by her favorite, Tom Shadyac. With over 60 national TV Commercials, appearances on THE BOLD & THE BEAUTIFUL, GENERAL HOSPITAL, reality shows to Show Host for HSN (Home Shopping Network), Karen feels blessed for the opportunities that continue to come her way and grow her! She was honored  with “Distinguished Filmmaker,” after both her short films, under her production company, Hollywood Ending Films, won BEST FILM.
Karen has a passion for travel, unique spas, the outdoors, being surrounded by family and friends, and a love for wine. “I would love to write and live on a vineyard!” This may come sooner than later as Karen’s first self-help/discovery book is near completion. It has been placed on her heart to travel and speak to women all over the world, helping them to heal their childhood hearts.