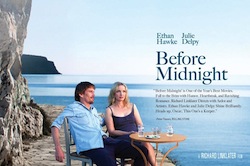 Jesse and Céline. Names that, since 1995, have become synonymous with true love. I highly recommend, although it is not entirely necessary, to watch the first two films in the series—

Before Sunrise (1995) andBefore Sunset (2004)—before seeing the equally enthralling Before Midnight. I will attempt to limit my explanation of the plot in my review, because (even more so than most films), the less you know going in the better. With that being said, I will have to at least touch upon certain plot points to discuss the film effectively, so proceed only if you are (at minimum) willing to find out whether or not Jesse got on that plane nine years earlier.

You optimists will be happy to know that your favorite onscreen couple has stood the test of time, and have been together (although not married) sinceBefore Sunset. However, the feeling of this film is vastly different than that of the first two. In the first film, they exhibit young love at its most exciting and passionate. In the second film, after nine years of that one beautiful night marinating in their souls, the passion was back again, and although time brought many other elements, the fire was still burning brightly. Now, another nine years have gone by, and this time the two of them have spent every one of those years together. They have twin girls together and they see Jesse’s son from a previous marriage only once a year—this fact causes much of the tension in the movie.

Life has happened to Jesse and Céline. Their witty repartee that once unfolded like a beautiful dance now feels like a ghost that only visits on occasion. They no longer gaze into each other’s eyes, trying to figure the other out, because all of the games and all of the mystery and all of the magic have made way for mundane practicality. Before Midnight exposes what happens to strangers in the night after years of normal everyday life spent together. This sounds very cynical, and in some ways it is. Yet the film still revolves around the love that these two characters share, and the fact that nothing—whether it be distance, time, or (in this case) boredom—will extinguish the candle they carry for each other.

The film takes place on the last day of a six-week vacation on the Greek countryside, giving us some of the most breathtaking backdrops in the series. While the relationship of the two leads makes its way to the forefront of the film, the best part of this new installment is that we get to see Jesse and Céline interact at length with other people. It is fascinating to hear Jesse discuss his books with people less familiar with them, to see him as a bit of a celebrity in certain circles, to see that Céline is becoming a budding politician, and to watch her interact with other women. Midnight fleshes out these characters as individuals, and while they discuss their outside relationships with each other in the first two films, it is a delight to see some of them unfold in front of our eyes.

Richard Linklater’s newest film answers many questions and asks a few more. It is about patience and what it means to be in a real relationship when all of the lust is stripped away. It opens the door for potentially yet another film in, I don’t know, 2022. It is every bit as satisfying as Before Sunrise and Before Sunset, only for very different reasons. There is an element of hope that remains strong in Jesse and Céline when they are at their most distant, even when it seems like the love is gone. If you enjoyed the first two films, you will enjoy this one just as much. If you can find it in a theater near you, you will not be disappointed.