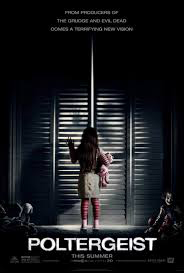 While Poltergeist may not be as terrifying as its original counterpart, it is still a fairly serviceable remake.  There are some scary moments, some good performances, and a plethora of wink-wink references to the 1982 film.  There is nothing groundbreaking about this horror flick, nor are the scares terribly noteworthy, but if you are in the mood to watch a nice family get terrorized by some spooky ghosts, then it is probably worth checking out.

At the start of the film, we are introduced to the Bowen family.  We find out fairly early on that the father Eric (played by Sam Rockwell) is out of work, and that they are struggling financially.  So, they are moving into a new house in a neighborhood that has been on the economic decline in recent years.  The mother Amy (Rosemary Dewitt) is a stay-at-home mom, taking care of the couple’s three children—teenager Kendra (Saxon Sharbino), younger Griffin (Kyle Catlett), and youngest Maddy (Kennedi Clements).  Upon moving into their new home, strange occurrences begin happening.  At first, static electricity seems to be inexplicably high throughout the house.  Then, a creepy collection of clown dolls falls from the attic into Griffin’s closet.  And later, Griffin finds Maddy standing in front of the television communicating with somebody, which prompts her to say the iconic line, “They’re heeere!”

Soon thereafter, while Eric and Amy are at a dinner party, the terror is amped up a few notches as Kendra gets snatched onto by a hand in the garage floor, Griffin gets yanked out of his window by a tree in the front yard, and poor Maddy gets pulled into the attic and is lost to the other world.  When the Bowens are unable to reach Maddy, they enlist the help of a paranormal investigator, Dr. Brooke Powell (played by Jane Adams) and her team to bring Maddy back from the poltergeist that snatched her.  When Dr. Powell’s team is not enough, an expert (and star of a TV show known for the above hashtag) Carrigan Burke (played by Jared Harris) comes in to help finish the job.  The plot trajectory is virtually identical to the 1982 version, so there are no real surprises as the hunt for Maddy plays out.

Even apart from the fact Poltergeist is a remake, it is not that original.  With some really scary and conceptually inventive horror films coming out recently (The Babadook comes to mind, as does the critically-acclaimed It Follows), Poltergeist feels a bit unnecessary.  Additionally, it relies a bit too heavily on CGI (the aforementioned tree that grabs Griffin by the leg seems pretty real, but the CGI Griffin that it brandishes high in the air does not).  However, the CGI world that Maddy gets pulled into is actually quite visually-interesting.  It is dark and bleak, and there are hands coming from every direction.  We see it only briefly at first, but when Griffin attempts to rescue Maddy on the other side, we really get to see how expansive it all is.  That being said, the brighter and less detailed in-between world from the original film is a lot scarier.  The clown is a lot more terrifying in the original, too, by the way.

One thing that makes this movie quite entertaining are the performances, while the film was probably nothing more than a paycheck for most of the actors involved.  Sam Rockwell is always good, and his work in Poltergeist is no exception.  Rosemary Dewitt is great, as well, and their relationship is well-defined and fun to watch.  The two actors have a lot of exposition to plow through before the film can really begin—that he’s out of work, that he used to be a semi-professional baseball player but that he’s settling for office work now, that she’s a stay-at-home mom, that they are moving because they can no longer afford to live in their old town, that Griffin had a life-changing and traumatic incident at school two years ago, etc.—and throughout all that, Rockwell and Dewitt still manage to make it relatively entertaining and interesting to watch.  That’s a pretty big accomplishment.  The Bowen children are all well-cast, as well, and Jared Harris steals every scene he is in, as the foul-mouthed and cynical TV show host.

While not the scariest or most original horror film to come out this year, Poltergeist is a fun (and yes, wholly unnecessary) remake, and worth the watch if you need to get an early-summer horror fix.  The acting is good, the plot is fine, and the special effects are used a bit too frequently.  If you really want a good scare, stay home and watch the original film, instead.