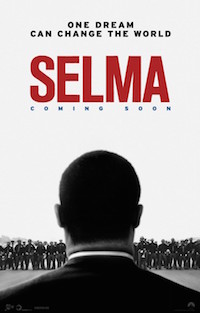 50 years later, and the story of Martin Luther King Jr.’s march from Selma to Montgomery for voting equality is just as relevant as ever.  Selma is a well-acted, emotionally honest look at an extremely important time in American history.  While it can be disturbing and hard to watch at times—the violence is addressed directly and graphically—this is an important film to watch, in a time where racial tension throughout the United States is as high as it has been in quite some time.

The film begins with Martin Luther King being presented with the Nobel Peace Prize on October 14, 1964.   The movie then follows the story of his time spent in Selma, AL, culminating in one of the most famous and well-publicized protest marches in history in March of 1965.  The cast includes some of the best actors working today playing a slew of historical figures, including Carmen Ejogo as Coretta Scott King, Tom Wilkinson as Lyndon B. Johnson, Tim Roth as George Wallace, and Oprah Winfrey as Annie Lee Cooper.  And of course David Oyelowo’s performance as Dr. King himself is quite extraordinary.

Selma does an excellent job at showing King as a human.  We all can picture him preaching in front of thousands, with his magnetic voice and his captivating presence.  What this film does so well is show him as a man—a man with a family, a man with a wife who wants her husband to spend time with her at home, a man with everyday issues.  Something else that is really illustrated throughout this movie is the constant threat of assassination hanging over Dr. King’s head.  His family receives threatening phone calls, and King even jokes about being a target.  As King has been immortalized, it is easy for us to forget that while being the leader of the Civil Rights Movement and one of the most important figures in our country’s history, that he was a family man with the constant threat of violence at his doorstep.  Selma illustrates this fact quite effectively.

Oyelowo, who has had a breakout 2014 with roles in Interstellar and A Most Violent Year, gives a performance as Martin Luther King filled with nuance and an incredible amount of heart.  Few roles carry such an enormous legacy to live up to, and Oyelowo delivers, showing many different sides of Martin Luther King.  There is one scene, for example, following a scene between Coretta Scott King and Malcolm X (played by Nigel Thatch) in which King displays a brief streak of jealousy towards his wife’s affection towards Malcolm X and how far he has come.  In the end, however, Oyelowo plays King as the compassionate, decent, and driven man that he was.  Throughout the film you forget that you are watching an actor, as Oyelowo walks in the shoes of one of the greatest men that our country has ever known.

The other actors do an excellent job, as well, to paint the picture of a complex time.  None of the performances are over the top or two-dimensional, and much of this can be attributed to Paul Webb’s script, in his writing debut, and the directing of Ava DuVernay.  Tim Roth’s portrayal of Alabama Governor George Wallace, for example, shows shades of grey, as does Tom Wilkinson’s take on LBJ.  Roth, for example, is despicable and racist as Wallace, but he still plays him with a certain level of humanity.  All performances throughout the film are subtle and never heavy-handed.  Oprah Winfrey’s take on Annie Lee Cooper, Common as James Bevel and Omar J. Dorsey as James Orange; these clearly well-researched and fully-defined performances help fill out the world and give us a much richer picture of 1965 Alabama.

With everything going on in the country today, from Ferguson to New York City to countless other places where racism shows itself in violent and non-violent ways on a day-to-day basis, Selma is an important film to see.  While we have come a long way since 1965, there is still quite a way to go.  See it for Oyelowo’s performance, and see it because King’s legacy is a vitally important part of today’s national discussion.