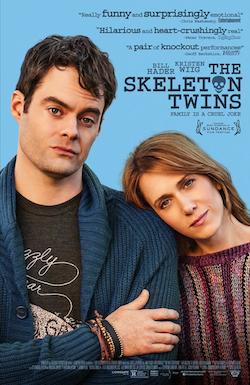 You’ll never listen to Starship’s Nothing’s Gonna Stop Us Now without smiling after seeing The Skeleton Twins.  A heartfelt script from Mark Heyman and Craig Johnson and incredible, unexpected performances from Kristen Wiig and Bill Hader make this film a true contender for the upcoming awards season.

The Skeleton Twins is about estranged siblings Maggie and Milo (Wiig and Hader) who reconnect when Milo, after a failed suicide attempt, comes back to his hometown to stay for a while with Maggie and her husband Lance (with a steals-every-scene performance from Luke Wilson).  Throughout the film, as the layers of the onion are peeled back, we learn many things about Maggie and Milo’s past, including why they have not spoken in a decade and why Milo fled to Los Angeles.  The film takes its time to allow the characters’ complexities to illuminate, often just giving the audience small bits of information that become enormously telling as the story unfolds.

It is truly something special to behold such nuanced and real performances coming from former cast members of Saturday Night Live.  In 2013, Will Forte showed audiences that he was deeper than Tim Calhoun or MacGruber in Alexander Payne’s film Nebraska.  Now, The Skeleton Twins shows us that Kristen Wiig and Bill Hader have a remarkable amount of depth as these two extraordinary damaged but resilient brother and sister.  Bill Hader plays Milo with so much grace and love that we cannot help laughing with him and crying for him throughout the film.  There’s a scene, for example, that takes place between Hader and Ty Burrell (who gives a stunning performance as Rich, a former high school English teacher of Milo’s).  It has been revealed that Rich had an inappropriate relationship to the then 15-year-old homosexual and confused Milo.  In a scene late in the film, Milo realizes some things about their relationship, and about Rich’s character.  With just a few words and a few looks, Hader’s performance tells us everything.  We know how he feels, what he’s learned in the scenes leading up to this one, and what his decision is in terms of his relationship with his former teacher.  And it is all done in the subtlety of Hader’s performance.  If he is not nominated for an Academy Award for his work in this film, then there is a problem with the Academy Awards.

Kristen Wiig gives an equally incredible performance as Maggie, a woman who is in a sad marriage with upbeat and loveable (yet completely wrong for her) Lance.  When we first meet Maggie, she is about to swallow a handful of pills, when she gets the call that her brother has been admitted to the hospital for trying to kill himself.  Wiig demonstrates so much depth as Maggie, as she goes on a journey from a woman at the edge to slowly gaining back control of her life.  She is very broken and vulnerable, and Wiig lets us in, allowing us to glimpse at her pain and her (underneath it all) loving heart.  Watching Wiig and Hader in these performances is an amazing thing to witness.

The script is also terrific.  Heyman and Johnson have crafted a near-perfect combination of comedy and drama, spite and forgiveness, to reveal something about the human condition through a pair of troubled siblings.  Information is held back throughout the film until it is finally time to be revealed.  And when that information is revealed, it is always in an unexpected and subtle way. The way that Maggie’s inappropriate and increasingly adulterous relationship with her diving instructor develops, for example, is done with very few words. All of the relationships in the script, in fact, are handled with care and respect for the audience.

2014 has been a good year for unique and engrossing small-budget films, and The Skeleton Twins is right near the top of that list.  Kristen Wiig, Bill Hader, Luke Wilson, and Ty Burrell all give performances that will not soon be forgotten, and the script is top notch.  See it as soon as you can, and good luck getting Starship’s famously cheesy song out of your head the next day.