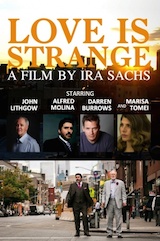 In Love Is Strange, quiet, everyday moments are strung together, making for a meaningful and thought-provoking film.  The performances are breathtaking, the script is fascinating, and the tone is just right.  It is an art house film with an A-list cast, and it is well worth seeing if you can find it in a theater near you.

Love Is Strange tells the story of Ben and George (John Lithgow and Alfred Molina, respectively), a couple who has been together for nearly 40 years.  The film begins with their marriage, and George’s subsequent termination from his job as a music teacher at a Catholic high school—he is fired because the school’s religious policy does not accept same-sex marriage.  Ben and George can no longer afford their sizeable New York City apartment, so they are forced to move out.  Ben moves in with his nephew Elliot (played by Darren E. Burrows), Elliot’s wife Kate (Marisa Tomei) and their son Joey (Charlie Tahan).  George moves in with Ted and Roberto (Cheyenne Jackson and Manny Perez), NYPD Officers who seem to throw a party every night, much to the dismay of contemplative George.  Ben and George’s displacement is the heart of the drama throughout the film.

Lithgow and Molina are so fantastic as Ben and George that you will completely forget you are watching two actors, and you will be convinced that you are watching two men who have been in a relationship for four decades.  There’s a scene, for example, in which George—after having a particularly rough night with his new temporary roommates—flees to Elliot and Kate’s home to weep into Ben’s arms.  Their reunion feels so intimate and real, it is almost as if we are intruding on an extremely private moment.  When Elliot and Kate leave the room to give Ben and George some time together, we cannot help but feel that we should be leaving, too.  This is a huge testament to the two leads’ performances.

The supporting cast is terrific, as well.  Marisa Tomei, as the increasingly frustrated Kate, really brings us into her world.  She loves her Uncle Ben, but she can only take him in small doses.  A scene in which she is trying to write her most recent novel, but keeps getting interrupted by the heartbreakingly well-intentioned Ben, shows her compassion as well as her inability to set boundaries.  Dan E. Burrows as Elliot and Charlie Tahan as the adolescent and confused Joey both do great jobs in their roles, also.  The remainder of the roles are perfectly cast, helping round out and make real the world in which Ben and George inhabit.

The tone of the film and the writing are also superb.  The pace is slow and deliberate, but the film does not drag and it is never boring.  It simply takes its time.  Ira Sachs, who directed and co-wrote the movie, does a great job at allowing the audience to form its own conclusions.  Much of the action of the film actually takes place in between scenes, showing instead the effects and the aftermath of major life events.  There are scenes with no words whatsoever that speak volumes.  The movie will make you think long after the credits roll, and the final scenes will haunt you.

Love Is Strange is a sad, funny, and beautiful look at love and longing.  It is never manipulative, and it will make you laugh and cry.  Both John Lithgow and Alfred Molina will likely be very present during next year’s awards season, as they each deliver performances that will take your breath away.  If you can find a theater that is playing it, see this film as soon as you get a chance.