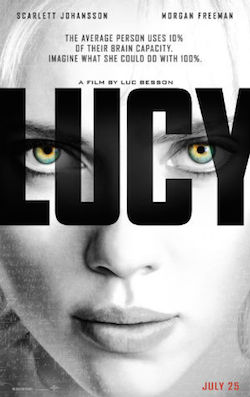 The average person uses 10% of their brain capacity.  Imagine what she could do with 100%.

Never has bunk science been so entertaining.  If you are able to look past the fact that the premise of this movie is preposterous, it is actually a lot of fun at times, and Scarlett Johansson’s commitment to the material makes the film one of the better popcorn movies of the summer.

Lucy (played by Johansson), a woman whose life is clearly on the wrong track, is forced to become a drug mule when her “boyfriend” handcuffs a suitcase to her wrist filled with contents unknown.  A phone call, a kidnapping, and a few deaths later, Lucy finds herself waking up in a hotel room with a scar on her stomach and a feeling of disorientation.  It turns out that a new drug called CPH4, which essentially gives the user the use of more of their brain than they could ever have imagined, has been implanted inside of Lucy’s stomach.  After getting kicked in the gut, the bag tears open, unleashing all of its glory into Lucy’s system.  And so begins her journey to utilizing 100% of her brain.

The reason to see this movie (really, the only reason to see this movie) is to watch Scarlett Johansson kick a serious amount of butt.  She’s essentially a superhero, as she gains the ability to move things without touching them, read people’s thoughts, and even fly.  She is so invested in her character that you will completely believe it when she shoots 5 people through a closed door without first seeing them, or when she imprints her thumbs into somebody’s head in order to read their mind.  Her transformation from broken woman to super human is convincing and remarkably entertaining, and it is due almost entirely to her commitment to the role.  The film would be close to unwatchable if a different actress were in those shoes.

Aside from Johansson, the other actors are really just there to fill in the scenery.  Professor Norman (played by Morgan Freeman) has spent his career studying the human brain.  His character is mainly there for exposition and to add some credibility to the insane scientific theories that he spouts off throughout the film, but with around fifteen minutes of screen time, his role in the film is rather forgettable.  The other actors are really just there to give Lucy something to fight.  I did mention that watching her fight them is the only entertaining aspect of the film, right?

On the level, this is an action movie that should not be taken too seriously.  Unfortunately, writer/director Luc Besson (best known for his 1994 film Leon: The Professional) uses Lucy to make a statement about the condition of the modern world and how commercialism is taking over.  His point is absolutely valid, but because the concept he is using to illustrate that point (that we only use 10% of our brains) is so wrong that anything else in the film meant to be taken seriously quickly becomes laughable.  It’s not just that the science behind the concept of the film is wrong, but it’s a concept that many people falsely believe to be true, and this weakens the very real and legitimate point that the filmmakers are trying to make.

So, while the film may not win any awards in the scientific community, this does not take away from the fact that Lucy is quite entertaining.  Scarlett Johansson is excellent, and the action sequences are a lot of fun to watch.  It is not worth seeing in the theater, but check it out at some point if you are in the mood for a mindless (no pun intended) thriller with one of the most versatile actresses working today.