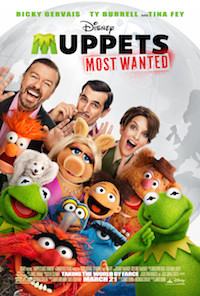 That’s what we do in Hollywood

The sequel’s never quite as good

The lyrics to the new Muppet song “We’re Doing a Sequel” end up being quite accurate.  Muppets Most Wanted is funny and better than most kids movies coming out these days, but it’s just missing a little bit of that Muppet magic that made the 2011 film so memorable (not to mention the films from the ‘70s and ‘80s).  With that being said, there are plenty of celebrity cameos, some great songs from Bret McKenzie, and a whole lot of Muppets doing a whole lot of Muppet things.

In this film, Kermit and the gang are persuaded to do a world tour by their new manager Dominic Badguy (that’s pronounced badgie), played to perfection by Ricky Gervais, getting the tone just right.  It turns out, however, that Badguy is actually the Number Two to Constantine, the World’s Most Dangerous Frog—Constantine also happens to look virtually identical to Kermit, aside from a big mole on his face (oh, and a thick Russian accent).  So after Badguy gets Kermit to go on a little stroll down a dark alleyway, a fake mole is slapped on Kermit’s face, and he is believed to be the evil Constantine.  So, Kermit is thrown into a maximum-security prison in Russia, while Constantine (with a little help of some green paint to cover up his mole) assumes Kermit’s identity so that he and Badguy can embark on an elaborate jewel heist throughout Europe, under the guise of a Muppet world tour.

There are plenty of terrific celebrity appearances and (along with Gervais) Ty Burrell and Tina Fey are both very funny.  Burrell, harnessing his inner Peter Sellers, plays Interpol Agent Jean Pierre Napoleon, and he has some great scenes with Sam Eagle as a CIA Agent.  Some of the funniest gags in the film, in fact, involve the two characters outdoing each other with increasingly large badges.  Tina Fey plays Nadya, the head of the prison that Kermit is sent to, and as you can imagine, their chemistry is pitch perfect.  There is a huge range of other cameos that enrich the film, including Zach Galifianakis (reprising his role from the 2011 film), Ray Liotta, Salma Hayek, Chloë Grace Moretz, Usher Raymond, Lady Gaga, Jemaine Clement, Danny Trejo, and Chrisoph Waltz.

A fun, silly plot and a cast full of great actors and Muppets make this movie feel like the Muppets we all know and love.  However, there are some elements that do not quite work.  There is just way too much CGI.  It’s subtle, but it makes the film feel a little too, well…not Muppet-esque.  There is a scene, for example, in which Kermit tap dances up and down a banister and on top of Ricky Gervais’ head.  It is a fun scene, a fun song, and is visually stimulating.  But it doesn’t feel real.  This may seem like a strange complaint directed towards a movie about puppets, but there is no innovation in marrying a Muppet with these special effects.  Kermit and the other Muppets ride bicycles in The Great Muppet Caper and Miss Piggy’s synchronized swimming routine from that same movie make you grin and say, “How did they do that?”  Kermit dancing on Ricky Gervais head makes you say, “Ah.  Computers.”

Another thing missing from this film that the 2011 movie had in spades was a heart the size of Jim Henson.  Jason Segel brought so much life to that film, helping a new generation of Muppet fans step into this fantastic and wonderful world.  While Ricky Gervais, Ty Burrell, and Tina Fey do a great job in their respective roles, there is no human story at the heart of it all (i.e. Jason Segel and Amy Adams) to glue it all together.  While the newest Muppet Walter is back in this film (and he brings a little piece of Jason Segel with him throughout the film, wearing a sweater in the style that Jason Segel is known to wear), it still feels as if something is missing.

Even though this may not be the best Muppet movie, it is also far from the worst (let’s just ignore the majority of them from the two decades prior to 2011).  It has a little bit of everything for everyone and it will not disappoint.  It’s worth checking out in the theaters, but if you must wait to watch it at home, that’s okay too.  It’s just good to see the Muppets together again (again).