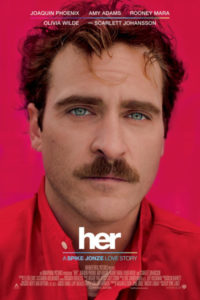 Set in the not-too-distant future of Los Angeles, technology rules the day.  And really, only moderately more than it does already.  This cautionary tale about our relationship with our mobile devices is one of the year’s best films, and it is highlighted by another incredible performance by Joaquin Phoenix, and one by Amy Adams as well.  If Her doesn’t make you think twice about burying your nose in your phone all day as life passes you by, then you should probably check your pulse.

Joaquin Phoenix plays Theodore Twombly, a writer who works for a massive letter-writing corporation—in a nice touch to go with the theme of distance that we create between each other, Twombly writes letters to other people’s loved ones on their behalf.  Twombly, lonely after ending a long relationship, downloads a new Operating System called OS1, and all of a sudden he has a new friend named Samantha (voiced by Scarlett Johansson).  Samantha is everything that Theodore could possibly imagine in a woman/personal assistant/life coach/pretty much anything else (aside from the fact that she is an operating system and not a real human).  Soon, however, the line between human and machine is blurred to the point that Theodore is in a committed relationship with his OS.

Pretty much any of the scenarios that you could imagine coming up in this situation do come up, as do many, many more.  Written and directed by Spike Jones (who is no stranger to melding experimental concepts with otherwise straightforward stories, going all the way back to the 1999 film Being John Malkovich), he does an excellent job at never judging Theodore’s quest to find love.  While it may seem like a topic out of science fiction, and you might find yourself laughing at the idea of a man falling in love with his computer, Her is done in such a delicate and loving way that you find yourself in Theodore’s shoes every step of the way—while still raising the important question about how far will we go to cut ourselves off from the people around us.

The performances in the movie are top-notch.  Joaquin Phoenix brings so much life to Theodore Twombly, portraying a complex, loving, and surprisingly not creepy man who falls in love with a piece of software.  The beauty in his performance is in the subtleties, as this role could have easily been played for more laughs, or with a constant wink at the camera, but Phoenix gives us a glimpse at a very lonely person who is absolutely desperate for companionship.  Desperate for someone to love, and for someone who loves him.  And Samantha fits that bill.  On the flip side of the coin is his relationship with his friend Amy (played by Amy Adams).  Adams, who is practically unrecognizable (I was actually only about 50% sure that it was her until the credits rolled at the end of the film) gives an equally incredible performance as a woman who might be a few steps further than Theodore when it comes to understanding love, but maybe not as far along as she would like to think she is.  Chris Pratt and Olivia Wilde also add a great deal to the film with their small but memorable roles.

Her is likely Jones’ best film in over a decade, and one that will most definitely be referenced often as we move forward towards the futuristic world portrayed within the film.  See this movie as soon as you can, and look for it during awards season, as it will without doubt pick up a handful of nominations (and I predict Spike Jones will win the Academy Award for Best Original Screenplay).  Now put your phone down and take a look around.