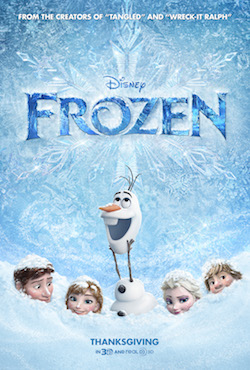 Don’t let the title fool you.  It will melt your heart.  Frozen, a retelling of the Hans Christian Andersen story The Ice Queen, is funny, charming, has memorable characters, has some great music, and is visually breathtaking.  It is definitely the family film to see this holiday season.

Frozen tells the tale of two sisters, Anna and Elsa, princesses in the Kingdom of Arendelle.  Elsa, the older of the sisters and the heir to the throne, has a magic ability to turn everything around her into ice.  One day, when the sisters are very young, Elsa nearly kills Anna with her magic powers, prompting her to stay locked inside so that she can never hurt anyone again.  Later, when they have grown up and their parents have passed away, Elsa must take the throne (and be seen in public for the first time in years).  During Elsa’s swearing in as Queen of Arendelle, she and Anna get into a fight and Elsa’s powers, which she has been hiding for all these years, come exploding out, forcing her to run away (and turning Arendelle and the surrounding area into ice and snow).  Elsa, along with handsome ice-seller Kristoff and his trusty Reindeer Sven, goes in search of Anna.  And the adventure begins.

One thing that really stands out in this film is that it is absolutely full of memorable characters.  To start, Anna and Elsa are extraordinarily well-written.  Their relationship is deep and complex and the audience is immediately invested in the two of them.  For example, early on in the film, Elsa, using her magical power, accidentally strikes Anna in the head with ice, nearly killing her.  This moment leads to Anna’s detachment, as she desperately tries to keep her powers hidden so that she can protect her sister.  However, it is the scene before the accident, when we see Anna and Elsa playing as carefree girls, that we begin to care so much about their relationship.  The stark contrast of this relationship before and after Anna’s accident is what makes the rest of the film work, as we hope for these two girls to become best friends again.  The supporting cast is terrific, as well.  Anna’s love interest Kristoff (voiced by Jonathan Groff) is great, and particularly memorable is Olaf the Snowman (voiced by The Book of Mormon’s Josh Gad).

The songs in the movie are great, and they have that “hard to get out of your head” quality of classic Disney films from the decades before CGI.  Anna and Elsa share a song called “For the First Time in Forever” that fits the film beautifully, and is a likely contender for Best Song at the Oscars this year.  Additionally, the beautiful winter scenery in the film is spectacular.  The scene in which Elsa builds her new ice palace as she finally accepts this gift she has been bestowed is particularly stunning.  Many animated films these days use the impressive visuals to cover up poor storytelling, but Frozen manages to use it to serve the story, making for a truly engrossing experience.

With great writing and incredible animation, Frozen adds another great family film to Disney’s vault.  There are princesses, a talking snowman, a love story, and magic.  The kids will enjoy it, as will their parents.  If there’s one film to take the family to before Christmas, make it this one.