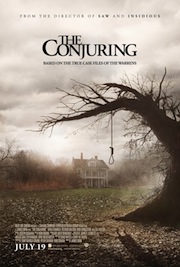 Some call them demonologists, some call them ghost hunters, some call them whackos, but they “prefer to be known simply as Ed and Lorraine Warren”, to quote Vera Farmiga as Lorraine Warren in this taught and terrifying new horror film from Insidious director James Wan.  The Conjuring is scary, well developed, and will keep you on the edge of your seat until the very last moment.

Based on the case files of the world-renowned husband and wife paranormal investigator team Ed and Lorraine Warren, the film focuses on a case that has supposedly been buried for over forty years because of its horrifying nature.  The movie begins as Ed and Lorraine Warren (perfectly cast by Patrick Wilson and Vera Farmiga) are investigating the Annabelle Doll (famous for being the inspiration for the Child’s Play movies), and sets up the information you’ll need to know:  they help people who are being haunted by evil spirits, they occasionally assist in exorcisms, and Ed is worried that the exorcisms are taking a toll on the spiritual health of Lorraine.  Meanwhile, we are introduced to the Perron family who are just moving into a house in the country, which turns out to be haunted by a slew of increasingly hostile spirits.  See where this is going?

Aside from a plot that gets a little too complicated for its own good, The Conjuring works on every level.  First, the casting is spot on.  Patrick Wilson and Vera Farmiga are perfect as the spirit hunting couple.  Wilson’s career is on a steady upward trajectory and, with the success of this movie, it is likely to continue in that direction.  Farmiga is subtle and powerful, as always.  Along with Wilson and Farmiga, Lili Taylor and Ron Livingston are effective as Carolyn and Roger Perron, the terrified homeowners trying to shield their four daughters from the evil residing in their house.  Lili Taylor, particularly, shines and shows many layers—i.e. protective mother, loving wife, woman possessed by a centuries old witch, etc.  Hayley McFarnland, Joey King, Mackenzie Foy, and Kyla Deaver round out the Perrons as the aforementioned daughters.  The chemistry of the members of the actors playing the Perron family adds to the realistic tone of the movie.

While we are talking about the tone of the movie, this would be a good time to mention the score.  Joseph Bishara’s composition used throughout the film might as well be another character.  It is loud, aggressive, full of bass that shakes the theater, and gets about as close to comically intrusive as it can without quite getting in its own way.  It practically screams, “You will be scared NOW!” yet it works.  It works because the scenes in the film would still be effective without it, so even though it draws attention to itself, it does so in conjunction with all of the other elements involved.

James Wan is really starting to find his voice as a director.  His career began with a bang as the writer and director of the original Saw (based on his short film of the same name), which was so successful that it even started a new sub-genre commonly referred to as “torture porn”.  Ironically—and thankfully—Wan is now directing horror films that seem to be putting an end to the genre that he helped create, making movies that do not rely on buckets of blood to generate scares.  Insidious was a step in this direction, and The Conjuring continues on the path of being scary due to good storytelling and not due to images of severed body parts that are hard to erase from your memory.  Let’s hope the same will be true of Insidious: Chapter 2, out this September.

This is one of the scariest movies to be released in a while.  It starts with a great script, and thanks to James Wan’s execution, the film works from beginning to end.  It has great performances, an ambitious score, and it’s based on the case files of the original ghost hunters.  If you are looking for a scary movie that also happens to be a good movie, then The Conjuring is definitely for you.  Just make sure that if you have any business that needs to be taken care of in your basement, to do so before you see the movie.  You will likely not want to go in there for a year or so afterwards.