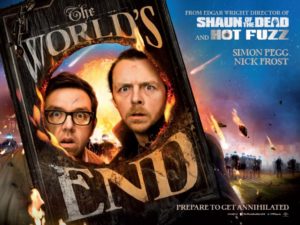 If you liked Shaun of the Dead, and if you loved Hot Fuzz, then just wait until you see The World’s End!  Ok, now that I got that ‘80s tagline out of my system, the fact is that Edgar Wright’s newest is arguably his best.  Simon Pegg is at the top of his game, the writing is extraordinary, and the mixture of various genres works better in this film than any other in recent memory.

The World’s End tells the tale of Gary “The King” King (his nickname is part ironic, part self-congratulatory).  The movie opens with Gary telling the story (to a non-receptive support group, it turns out) of how 20 years before, he and his four best friends attempted an epic mile-long pub crawl in their hometown of Newton Haven, but only made it to nine of the twelve bars and failed to reach the final pub, The World’s End.  Now, Gary manipulates his four (former) best friends into reuniting to complete their mission and hit all twelve pubs on one epic night.  It becomes clear that Gary has not grown up at all and is still very much living in the past, when the group realizes that Newton Haven has become a town run by robots that are hell bent on taking over the world—this is an Edgar Wright film, after all.

This film works on every level, and it all starts with the incredible script, penned by Edgar Wright and Simon Pegg, who also wrote both Shaun of the Dead and Hot Fuzz.  These films are fascinating in the way that they mash different genres together, as the newest The World’s End manages to make a comedy mixed with a disaster movie.  The key (as with the other two films) is that it is a comedy first, and a disaster movie second, as the rules of comedy always trump anything else.  Along with this, the movie also has an incredibly large heart.  Watching the film, you want to see Gary learn the error of his way, as the film is ultimately the story of Gary’s redemption, and the rest of the characters are also unbelievably well formed.  The only one-dimensional characters in the movie are the robots themselves (and the single force behind them), but hey, it’s a disaster movie, the evil force is supposed to be one-dimensional (giving the robots any sort of emotional texture would be like giving the shark from Jaws daddy issues).

The writing in the script goes so much further than just good characterization.  For example, something as small as an “Out-of-Order” sign shows how meticulously the script was crafted.  In Gary’s telling of his story from twenty years ago, he mentions sleeping with one of his friends’ sister Sam in the handicap stall in one of the pubs (I use the euphemism “sleeping with” loosely) and promptly leaving her to continue his drunken mission.  Now, Sam is all grown up and just as beautiful (played by the more popular than ever Rosamund Pike), and Gary makes an advance on her, and mentions that he would have done it in the handicap stall but it is out of order (there is a brief shot of the out of order sign earlier in the scene).  Sam denies Gary’s advances, and as she leaves the bar a scene later, she hangs the out-of-order sign around Gary’s neck, a visual way of stating that Gary has not grown up at all and that his life is out of order.  Gary continues to wear the out of order sign to the next pub (after all, the gorgeous Sam did give it to him, regardless of what she meant by it) and after a battle in a bathroom with several robots (who have also been meticulously set up in a scene earlier), Gary hangs the out-of-order sign on the door of the bathroom as the group leaves, so that nobody will walk in there and see the mess that was made, and so nobody will know that Gary and his minions are now privy of the fact that Newton Haven is being run by robots.  So, something as small as an out-of-order sign gives us an astounding amount of important information, and ties several plot points together.  And this is just one of many examples throughout the film.  Am I making too big a deal over an out-of-order sign?  No, in fact I might not be making a big enough deal over it.  With so many movies coming out these days with half-baked scripts that feel like first or second drafts, it is so refreshing to see a film that has been crafted with such skillful attention to detail.

The acting in the film is superb.  Enough good things cannot be said about Simon Pegg.  Not only is he brilliantly funny, but this film only works if he can pull off the moments in the film that require him to be emotionally vulnerable, and he pulls them off incredibly (he’s shown this same emotional depth before, particularly in his previous collaborations with Edgar Wright).  The supporting cast is equally engaging, particularly Nick Frost (also of Shaun of the Dead and Hot Fuzz).  Frost plays Andy, the most important (in terms of the story) of Gary’s best friends, and he nails it.  He is funny, and he exhibits every bit of heart needed for the role (and the film) to work.  Even as good as the writing in the movie is, the acting is what makes it one you will not soon forget—that, along with Edgar Wright’s flawless direction.  While the movie is extraordinarily style-heavy, the style is always in service of the story, and not vice versa.

If you are a fan of this team of artists, then you will love this movie.  It is satisfying to the core, and it is one of the most purely enjoyable times you will have in the theater all year.  The writing is layered and deep, the performances are excellent, and the direction is top-notch.  It is hard to maintain a balance of comedy and disaster, but The World’s End manages to make it look easy.  Go check it out; it’s the perfect End to the summer movie season.