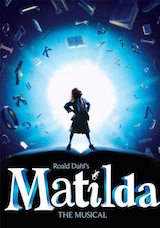 Delightful! Delightful! Delightful!  If I had to describe Matilda the Musical in three words… those would be the ones I’d choose.  Delightful x 3.  Matilda has a must close date of July 12th at the Ahmanson Theatre in Los Angeles, so I suggest you start making your arrangements now.  Seriously, you have my permission to stop reading and get to it.

If you need a little more convincing before you shell out a fist full of big musical dollars, I’ll do just that.  Roald Dahl.  Did that help?  If you happen to be a fan of the extremely talented storyteller and writer… stop reading and get your tickets.  I fall into the admirer category but it would be an exaggeration to say I was a RD fan.  Although, I may be now.  The book (Dennis Kelly) is the reason to see this show.  The cast (darn, those kids are good!  And yes, well, the adults are, too) follows VERY closely behind.

Matilda is the story of a wildly intelligent 5-year-old little girl (Mia Sinclair Jenness on the might of my attendance) who is grossly underappreciated by her family… and that’s an understatement.  Matilda has an extreme love for books.  For kicks, she reads Dostoevsky in the original Russian while her parents beg her to be more like her lug of a brother (Danny Tieger) and watch television.  Her mom (Cassie Silva) didn’t want her in the first place, as it was an inconvenience for her ballroom dancing career.  Think Strictly Ballroom and you know Matilda’s mother.  Her father (Quinn Mattfeld) a shady and slick used car salesman refuses to acknowledge the fact that she is a girl.  Matilda calmly reminds him repeatedly that she is, indeed, a girl.  She is sent to the strictest, most terrible jail-of-a-school where her uber intelligence is squelched by the punishing head mistress, Miss Trunchbull… (Bryce Ryness… yes, Bryce as in Boy, in drag) who can’t be inconvenienced by the standout Matilda factor and relishes the opportunity to punish her.  Matilda’s only saving grace in her truly terrible life is her teacher Miss Honey (Jennifer Blood) who seeks, unsuccessfully, to help her excel and the librarian (Ora Jones) who listens to Matilda’s storytelling during her daily trips to the library.

The story has many clever twists and turns that leads to the inevitable “good guys win” ending that all good children’s stories should have… And it’s the twists and turns that are the genius that is Roald Dahl.  It’s the genius I’m choosing not to give away.  Don’t write this musical off as a silly kids show.  It isn’t.  It’s definitely for adults, and totally fine for older kids… but the younger ones might get restless or miss much of what’s going on.

Because I feel required to acknowledge the downsides or flaws in the show… it’s a long one.  I was never bored.  I never checked my watch… and I’m a 90-minute show fanatic.  This one is twice as long as my preference.  Surely it could have been cut down a bit.  And, although it doesn’t bother me personally, there is no anthem.  There is no song you walk away singing… no compelling reason to go home and buy the album on itunes.  This is likely a problem for the overall commercial success of the show.  The Ahmanson hasn’t been selling out.  This could explain why.  The music and lyrics guy (Tim Minchin) may have failed in the creating an anthem task.

The other catchy musical theatre stuff like the set, costumes, and choreography (Rob Howell and Peter Darling) were totally up to snuff.  And I hinted at it before, but the cast was really, really, great.  How do those kids memorize all those lines and dance moves?  This is the best musical that you haven’t heard much about.  Kinky Boots stole the attention in 2013… but this hidden gem deserves an audience.  Go get in a seat.