Inside The Industry Seminar

Delightful social media and marketing maven (and fellow Casting Networks columnist) Colleen Wainwright was our guest speaker for a two-part seminar in 2008 and 2009, and then again at our free Casting Networks Inside the Industry Seminar on July 27th.  It was interesting to hear updates on how some of Colleen’s viewpoints have changed with the growth of social media.

Colleen Wainwright is a writer-speaker-consultant who started calling herself “the communicatrix” when she hit three hyphens.  She spent 10 years as an award-winning TV copywriter crafting ads for brands like Wheaties, Gatorade and Jell-O, and another 10 acting in them for cash money.  Since deciding she’d blow her brains out if she had to sit through one more meeting about which way the bears danced around the cereal box, she has spent most of her time teaching other creative souls how to talk about what they do in a way that wins them attention, work and satisfaction and the rest of it horsing around on the Internet.  In 2011, Colleen used herself as a guinea pig for her own theories on social media and attention, raising over $50,000 in 50 days for WriteGirl, a local Los Angeles nonprofit benefitting high school girls.  She has enjoyed a new attitude—and delightfully carefree hairstyle—ever since.  Colleen has been the writer of Act Smart! in the Casting Networks newsletter the Networker for the past seven years.

In this brief overview, here are a few things Colleen covered-

Colleen spoke about marketing and being effective with social media.  She stated, “Social media…we all use social media a lot now to market but here’s the thing.  It looked so great when it came out because everyone was like, ‘Awwww! Here are all these places all over the Internet where people want to know what I think, what is going on with me, what I ate for lunch and all that stuff.’  Guess what?  If you start thinking of the Internet as your microphone with everyone out there waiting to hear what you say, this is how you’re really coming off.  You’re some person chasing people down the street with a megaphone.  You are that annoying person who is trying to get attention.  Yes, it’s about reaching an audience absolutely but how do we really reach an audience? I don’t think we reach an audience by selling them something.  You reach them by establishing a relationship.  Social media is trying to be social with one another but it’s really about connecting with each other.  I’ve made tons of friends all over the country and all over the world now from social media, then I meet them in person.  It grows and grows and grows and jobs come out of it and all kinds of wonderful things have happened because of the Internet, because they didn’t treat it like it was one gigantic opportunity to get an ad.” 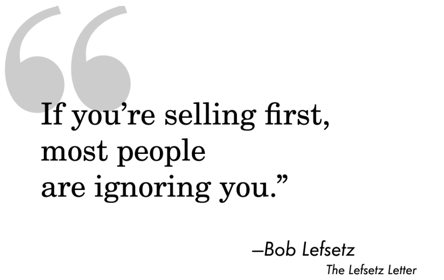 Colleen continued, “This is the truth.  I talk about Bob Lefsetz all the time.  If you’re selling first, most people are ignoring you.  People email me and I’m just a marketing columnist.  I can’t imagine what it’s like with casting directors.  People email me and it’s like, ‘Me, me, me, me, me, me!!!’  I’m like, ‘What?’ Then every once in a while, someone will email me saying, ‘I loved your column and here’s exactly why.  I got this out of it and that out of it…’  Sometimes they just want to tell me that and hey, that’s awesome!  Sometimes they actually have a question. I’d be happy to answer a question.  In my experience, most people are like that.  If you can actually see people and connect with them, and do it in a respectful way, it’s amazing how many doors will open!  They don’t fly open and you don’t wind up as the lead in a TV series right away.  It’s the beginning of a relationship that you are going to build over time.”

Colleen went on to say, “After social media which we now know we’re not going to sell on, I would say that the chief actor marketing tool is your headshot, right?  People would not disagree, I hope.  Maybe your resume…that’s kind of important.  Of course, your reel is important.  Those are super basic marketing tools. People will say, ‘What about Facebook?’  Before you get on Facebook, before you get on Twitter or you do even LinkedIn, please know what your ‘type’ is. Please have a good presentation of that.  Make sure you watched television, the movies and web series and understand what it is you’re playing and what it is that you have for sale.  Know who you are. This is exactly the same stuff I tell all my business people who are making (their) business with photographs, writing and everything else.  The number one thing is you need to know who you are.  The more specific you can get, the better.  For civilians (non-actors), this means that they have to take into account their background, their interests, their experience and everything they know that’s brought them to where they are today.  Now actors also have to know their ‘type.’  You physically have to ‘get down’ with who you are.”

Colleen sited herself as an actor as she continued, “For so long, when I was an actor, I was like, ‘I know people cast me as the funny whatever or the crazy secretary who always jams the copy machine or the Mom who is doing everything wrong.  ‘But really, I am a beautiful, tall poet and I should be seen as this glamorous….’  Yeah….no one was buying that.  [laughter]  I wasn’t going to get hired for my amazing dramatic ability and astounding beauty.  I know…it’s hard to believe.  [laughter]  Get down with your type.  It will save you so much time and trouble.  It’s better to be who you are and working, right…than to be glamorous in your house.  [laughter]  I don’t get paid for being in my house usually.”

Colleen said, “So then you need to think about the skills that you have.  Again, this is every trick that you have picked up along the way.  For civilians, it’s everything.  For you as actors, maybe you’re good at writing or maybe interviewing or at production.  Also, you have to be good at acting.  That’s a given.  If you’re not good at acting, go leave here and go to your acting class now.  Go and act a scene with someone.  Think of the other kinds of things that you have that you can bring to the table.”

“Then you need to know ‘the market.’  That’s why I say to watch television which I’m sure you all already do. Watch television not as a civilian but watch as an actor.  Watch it like a business person.  You should be watching every commercial, especially the ones that you go out on and that you didn’t book.  Look at who is there.  Now, you are not going to know all the answers why someone booked something and you didn’t.  I know this because I used to be on the other side of the camera. I wrote those ads and I was horrible and I’ve paid a lot of karmic debt for being a horrible, horrible person as a copywriter. [laughter]  I know…all those things and what they’re saying about you in the room when you’re not there are true and worse.  I’m sorry…I’m sorry.  I apologize on behalf of humanity but that’s just the way it goes. Make sure you know what the market is.  Don’t be delusional and understand what is there.  It’s hard to get jobs now.  Now you have famous people fighting for the same jobs that used to be given to us. Everyone’s nodding because we know.  It was starting to happen when I became an actor back in the ‘90s but it’s definitely more so because jobs are harder to get.  So you take these three things and the skills you have and that’s your ‘brand.’”

Regarding ‘brand’ Colleen advised, “Do not worry about your fancy website and do not worry about your logo.  It’s nice to have a type face that stays the same from headshot to headshot.  It’s nice to have similar things but don’t worry about it.  We get hung up on logos and design and stuff.  There is nothing wrong with having things be similar, right?  When you see a Target logo in different places, everywhere you see it you think, ‘Target, Target, Target.’  If you see it upside down and backwards, you think Target.  You see it on someones’ Christmas tree, you think Target.  It’s not even Target but Target does a really good job with visual identity.  Visual identity is part of branding but on the day after Thanksgiving on Black Friday….who’s been in a Target?  It’s hell.  There’s nothing on the shelves and people are clawing at each other.  They’re animals. That is not how Target wants you to think of Target but that’s the reality of what’s going on at Target.”

Colleen stated, “My friend Jonathan Baskin trademarked this on a book that he wrote. How you act is far, far more important and I mean both that double entendre way, ‘How you act’ like please be a good actor but beyond that, how you behave.  How you behave when you meet people, how you shake hands, how you present yourself at an audition.  Are you a whiner?  Nobody wants to work with a whiner.  No one wants to work with a complainer…ever!  So all those kinds of things are your brand.  Every single way you show up, that is marketing.” 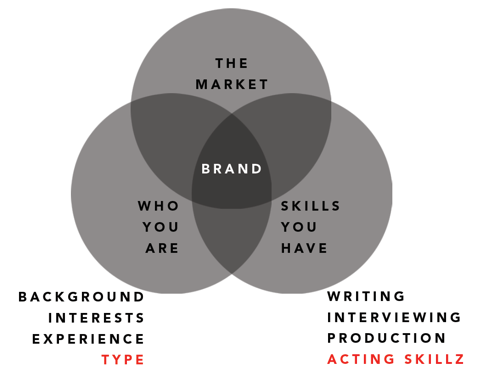 With the interactive social websites-

When asked if actors should put their demo reel up on YouTube, Colleen said, “My opinion on that is that you can absolutely use YouTube as a portfolio, the same way as you can just use LinkedIn as a resume.  I don’t think you are leveraging the full power of the platform if you do that.  I think that’s a limited way of looking at it but if you’re not interested in doing anything but housing your reel somewhere that’s not on your website, then yeah, I think it’s fine to do that.  I would make sure that anything I am putting anywhere is of the highest quality as possible of course. Then you have to be clear that that’s what you’re using it for.  You know what I mean?  Manage your expectations.”

Colleen concluded with, “Guys, we dreamed when we were young to be able to like have our own TV shows and now we have it.  We have it.  We can make almost anything with almost no dollars!  Why would you color in the lines?  Why are you coloring inside the lines?  Go make something crazy that is beautiful and new!  Don’t waste time trying to conform to someone’s idea of who you are and what you should be……’I’m going to fit myself in this role and I’m going to get on this show.’  It’s fine to have a goal to get on a show but that show is going to be gone.  So what?  What do you leave behind?  There’s this beautiful art inside of you.  What are you doing to get that art in front of people?  To share this beautiful thing inside you with other people.  That’s why you’re in this, I hope.”

Thank you Colleen for a great seminar!  Colleen stated that much of what we briefly covered today and more was also on her website.  www.communicatrix.com/lacasting

Another resource she thought valuable is Bob Lefsetz’ website

Email Tracy, or find her on IMDB