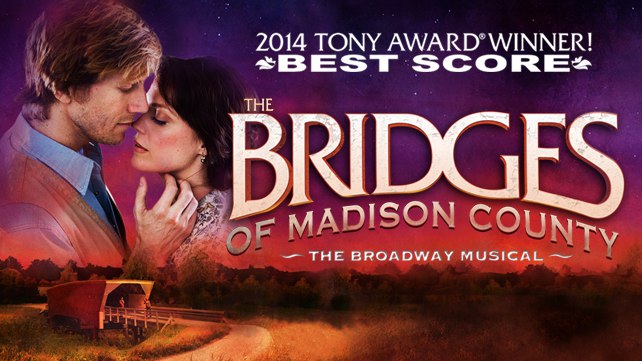 So, I went to see Bridges of Madison County at the Ahmanson Theatre.  If you are anything like me, you might wonder why I would do that.  I wasn’t terribly enthusiastic, but I’d heard the book was good (no, I haven’t read it) and the movie with Meryl Streep and Clint Eastwood did well (all the way back in 1992) but I never saw it.  At this point, I just haven’t been interested in BOMC.  After seeing the national tour of the musical, my interest hasn’t grown.  Groan.

It’s a love story.  Apparently the novel was a hit with the ladies, specifically housewives, which almost guarantees a chick flick would be the follow up.  But a musical?  12-ish years later?  Again for the chicks, I guess?  For those of you, like me, who haven’t caught wind of the hardly believable premise, here it is: a passionate affair between an Italian-war bride-turned-18 year-Iowa-housewife and a handsome/loner National Geographic photographer simmers to a boil after he, by chance, stops by her house asking for directions to his last shoot (of a covered bridge, of course) right after her husband and kids head out for a four-day steer competition at the fair. There will be no need for a spoiler alert.  I’m not going to ruin the ending for you, but the show is at its best in the buildup to the “are they going to do it or not” point.  And there is still another half remaining of this 2 hour, 45 minute show.  Ugh.  It’s hardly a reach to believe 50 Shades of Grey might be a better choice of a book turned movie… to be made into the ‘ole musical for the housewives.  But no one asked me.  And no, I didn’t read that one either.

There was quite a team assembled to ensure BOMC’s success.  The playwright is Pulitzer Prize winner Marsha Norman.  Known and respected Jason Robert Brown was in charge of music and lyrics and he won the Tony for Best Original Score and Best Orchestration.  Bartlett Sher with his impressive resume, was given the director’s hat.  These aren’t schmucks.  Elizabeth Stanley as Francesca is great, really.  And so is Andrew Samonsky as Robert Kincade.  The story was populated with minor characters that weren’t necessarily featured in the book to fill out the story…this was Ms. Norman’s idea, and pretty much mandatory.  Possibly to help raise the stakes of the affair?  Is there such a thing as a two-person broadway musical?  I can’t think of one.  That likely is the reason behind the townspeople characters.  But the chorus is solid.  The husband (Cullen R. Titmas) and the kids (Caitlin Houlahan and Dave Thomas Brown) and the neighbors (Mary Callanan and David Hess) were all good!  The music is all over the map.  And I mean this in the best way.  There’s a little country, pop, opera, and the blues…and the cast had the pipes to sell it.  The reasons for Jason Robert Brown’s Tony wins are obvious.  And I’d be doing a terrible injustice if I didn’t mention the simple but creative and effective set by Michael Yeargan.  It was one of my favorite aspects of the show…the set.  (second groan).

So, really there’s no way I can say this is a terrible show.  If the book really got you going, there’s a good chance you’ll enjoy this musical.  I just never got hooked.  I didn’t necessarily know how the show was going to end, and I didn’t really care, unfortunately.  This show just wasn’t for me.  If you connect with restless housewives yearning for a moment of passion, I’m sure it will be a winner.  I’ll step out on a limb and say that if you are a Gen Xer or younger just pick a different show.  Los Angeles is chock full of them.