What Upbeat Means When You’re Touring 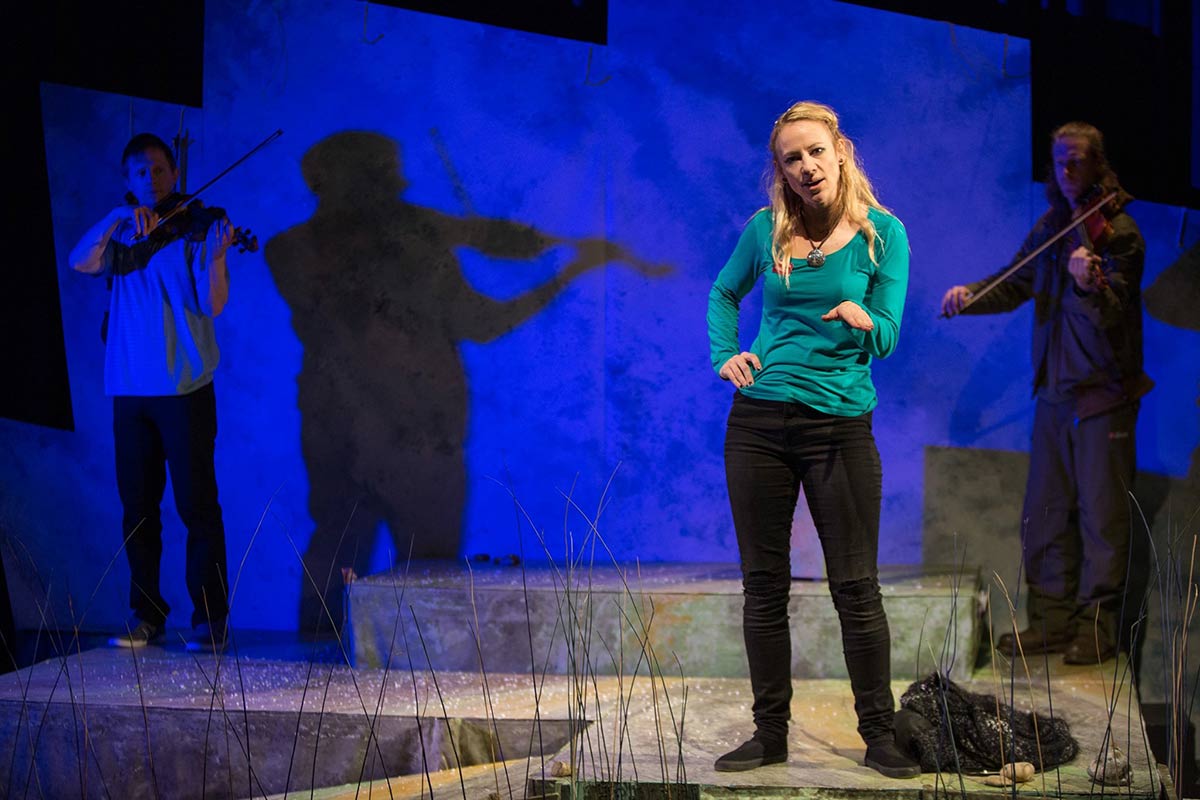 Upbeat: a state of mind and a play on words with regard to the river beats – stretches of water looked after by river keepers.

I am ‘Upbeat‘ at the moment – as we are in our last day of rehearsal for a play of the same name. It’s my first tour experience and it is a complex and beautiful memory play with music, singing and fiddle playing with just three of us all on stage all of the time. It is quite an undertaking. And I’ve been anything but upbeat during times of the rehearsal process, being honestly overwhelmed by the pace of learning. But it’s all coming together just in time for our previews this week!

The thrill of touring

I had been warned by friends in the business that touring can be exciting, exhausting and thrilling and lonely. You pack up and move away from your life wholesale, staying with families in rooms and spaces that may include noisy teens and domestic issues. There are plenty of digs based horror stories we’ve all heard to make the move a little unsettling: I’ve had chums recount tales of staying with folks dealing with family issues, loss, grief and a propensity to turn the heating off or up all of which can throw a curve ball for a tired actor requiring sleep.

Thankfully my digs on this tour (found via a list supplied by the theatre company I’m working with) are a delight. Bar an unexpected 21st birthday party, it’s been pretty cosy in my attic with the rain and wind battering my skylights.The family’s friendly spaniels are a joy to meet after a tough day failing to learn songs fast enough! Note to self for next time though: don’t choose a far afield option because of the pets. Instead, opt for a walk to work – it means you can have an extra glass of red when necessary!

While it’s been just three little weeks so far (with five more on the road still to come), don’t underestimate the time vortex that is rehearsals, away from the comforts and headspace of home. It’s both in a blink of an eye and eons depending on just how upbeat or shattered you’re feeling! The Doctor himself would struggle to wrap his head around the experience of tour time.

I honestly can’t tell you where the three weeks have gone (a luxury really, as the company used to work with just two). We have worked at a prodigious rate. Our day starts at 9.30am till 6.00pm each day, devoting some time to music, blocking and then working. Binging on biscuits during tea breaks then dragging our tired carcasses back to digs, via a quick glass of red, for work on lines and sleep has been very much the order of the day.

Next time I’ll work just as hard but smarter. I’ve realised there is little point trying to cram lines late at night after 8 hours of rehearsing. I’m a smart cookie and even highly academic in a former life you know…but I’ve learned to overwork is as dangerous as under working and can send a newbie a bit stir crazy.

There was a time when the received wisdom was that touring theatre was where actors went to cut their teeth. For me, as a newcomer to the industry and in my thirties being on my first tour, the real joy has been to learn from the gifted and experienced actors in the cast. With the nature of the play and the reality of the demands made on the actor musicians in our rehearsal period I can say with absolute certainty this touring malarky is not an easy learning curve – there isn’t time to take it gently. It is, however, a great and challenging professional experience. The standards are exacting and the play is the toughest technically I’ve ever undertaken.

The set has been taking shape throughout our rehearsals and clever design across split levels and traps mean our small touring set transforms into a the chalk streams of Hampshire, the mountains of Spain and the live parade festival of Berlin – clamps and ramps will take us far – as long as we remember to bend from the knees when lifting! 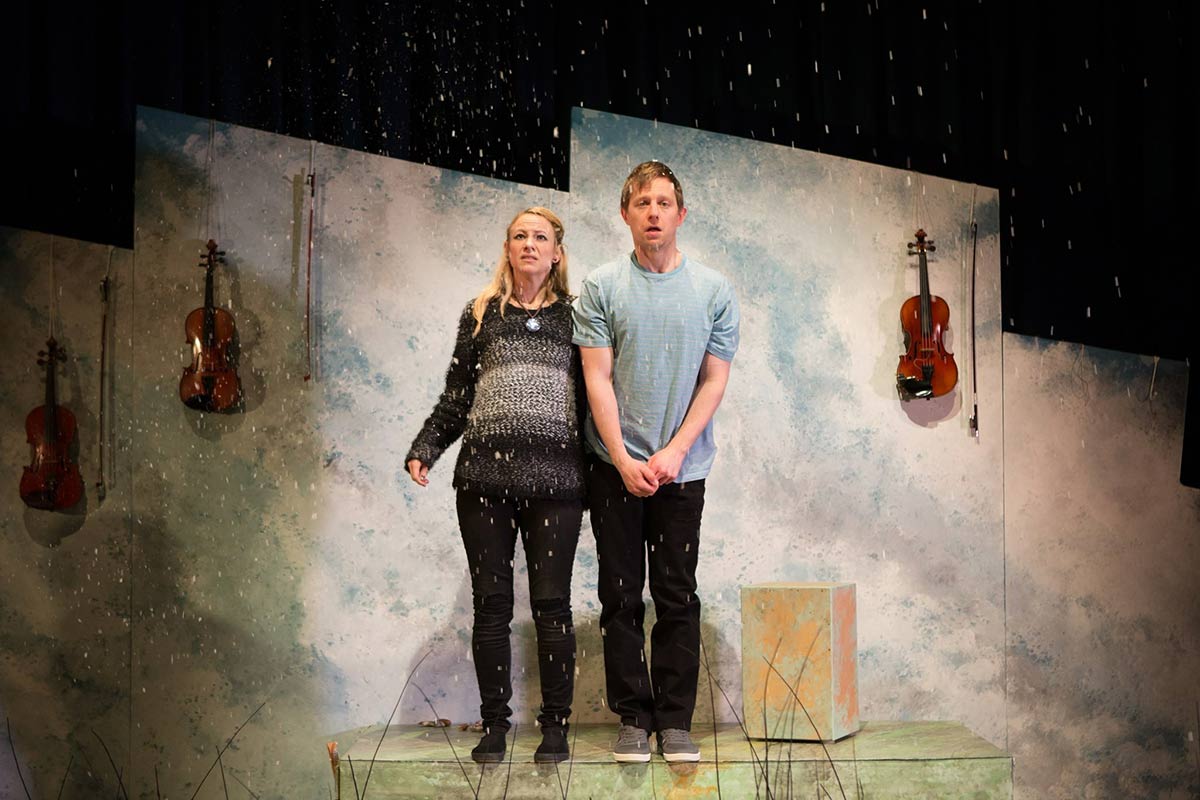 The obvious but the necessary

It’s obvious but you need to know your character and words as well as you can before rocking up on day one. It may be your first day of paid work. It may be day one of the contract but a fair bit of homework is definitely necessary! My lovely character, Becca, is an environmental activist, constantly on the move and estranged from her family. So in order to be ready, time with those folk, watching documentaries on the old Newbury protest and other events that are included in our play was imperative…. And now I’m about to hit the road for 4 weeks and am estranged from my folk – it’s a lovely fit!

We’ve been lucky to have our award-winning writer, the lovely Deborah Gearing, in the room during a lot of our rehearsals, and she’s brought her gentle and engaging intellect to our process (and is great to go to with questions). Her presence is also a reminder to aim for ‘DLP’, dead letter perfect, lest she dies a little inside as I add in thinking time ‘ands’ and ‘ehs’ or take more liberties with her words as my tired brain fails to recall detail! Knowing your character and lines is necessary.

As we get upbeat

As we get ready to leave our base in Ringwood and hit the road, I am genuinely excited. The emotional flux of the rehearsals is settling into bubbling enthusiasm and excitement for the tour ahead.

Forest Forge is a great company, and while we’ve been in the space we’ve seen exactly what a great community resource it provides. We’ve met the over-fifties group and the teens and younger children who attend the drama groups held there. It’s a joy to see. They’re all vibrant, noisy and excited about drama, and that’s just the over-fifties. It’s very sad that funding issues have led to the company making cuts to staff and programming. It’s an eyeopener to see how vibrant community work makes a difference in a small town and depressing to see it hit.

But enough with being down, we are Upbeat! And if you’re in the Southwest we’re coming your way between now and April 9th. You can find out all about the show here: http://www.forestforge.co.uk/

Abi McLoughlin is playing Becca in the Forest forge production of Upbeat, written by Deborah Gearing and directed by Kirstie Davis. William Wolfe Hogan and Pete Ashmore comprise the rest of the cast.