Theatre Review: When Both Sides Surrender 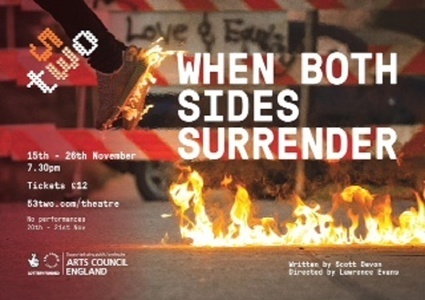 Off the corner of Deansgate, in the great city of Manchester, hidden away amongst the arches of old car showrooms, there seems to be an abundance of talented thespians making a racket. I blame 53two and it’s seemingly never ending schedule of events taking the fringe community in Manchester by storm in its maiden year as an Arts Venue.

After birthing its own night of fleeting theatre, ‘North South Shorts,’ then becoming a temporary venue to the old power that is JB shorts, 53two has now played host to Scott Devon’s poetically written When Both Sides Surrender.

The writing was described as Shakespeare meets A Clockwork Orange. I must start this review by conceding that I would not class myself as a fan of Shakespeare, however I am certainly a fan of Mr. Stanley Kubrick, so I had mixed feelings as I entered the theatre.

Richard Cooper and Kaeran Dooley should be proud, first for a wonderfully creative set incorporating a burnt out car, graffiti, battered steel, and decaying sofas that set the tone for the performance. Second, because these production aspects were matched in their quality by the costume and props, from the ‘trackies’ all the way to the police riot gear.

The audience is introduced to two brothers, Michael (Simon Naylor) and John (Darren Jeffferies) at the start of a war between the forgotten working class youth and the overly violent police force, whose age-old policy of easing disorder through further violence has reached a breaking point. When an unarmed young lad is shot dead by police, riots erupt. The Senior Officer (Andrew Readman) provides our police protagonist, insisting his officers respect the law as they put a stop to the rioters; many of them, however, have their own ideas. We see from both sides as horrors take place, leaving loved ones dead, careers and families broken, and moving no closer to solving the root of the problem—a very relevant message in this time.

Clever direction from Lawrence Evans kept the audience engaged throughout, by utilising the set to its utmost potential. Riot shields bang and clash, bottles smash, a well timed gunshot means that anyone losing focus were certainly reminded of where they were, and action took place in the aisles making the performance more immersive.

The language used throughout is a stark contrast to the violent and barbaric content matter, using the language of Shakespeare to juxtapose between the chaos and the cosmos. Though there were occasions when I yearned for simplified dialogue and felt that the style actually took away from the drama—it was allowing me to hear the inner turmoil of each person, yet still fail to bond with them due to the mix of classic and contemporary. However, there were plenty of blocks of dialogue that had me purring in admiration, poetically justifying both sides brutality, and forcing the audience to empathise with all characters.

The writing gave an eloquent voice to the massively under-represented—especially in this industry—working classes. That makes it a very brave piece of theatre, not aiming to be a crowd-pleaser, but to make us think. Because of this, When Both Sides Surrender certainly won’t be for everyone, but there is no doubting the talent of the writer, the relevance of the subject, which will resonate with people from all walks of life, and the value of a venue with limitless potential.