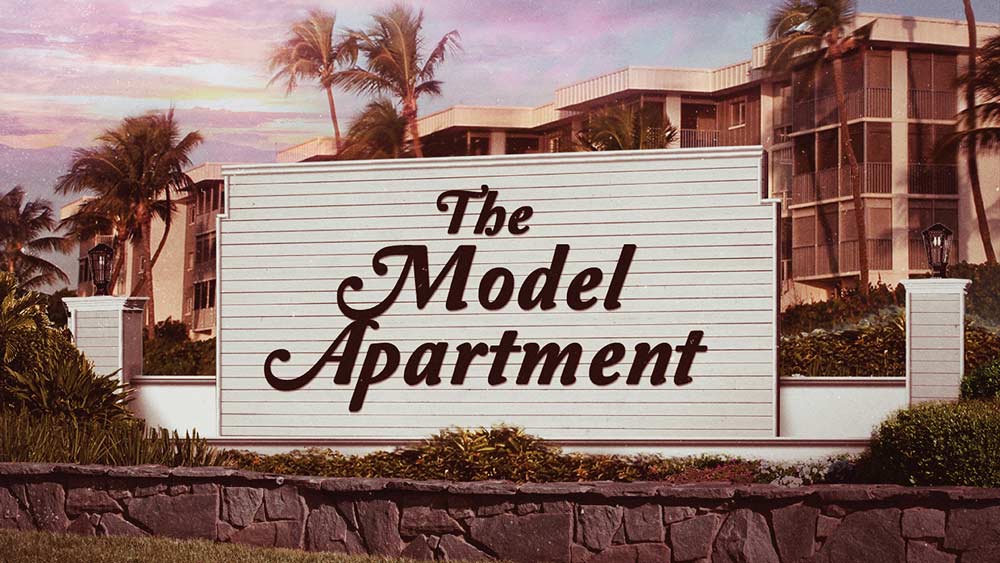 In general, I’m a fan of the shows the Geffen puts up in their tiny Audrey Skirball Kenis Theatre. I’m not sure that they would bill it this way, but I find the shows to possibly be a little more edgy, interesting, risky, or “off,” and I mean that in the best way. Maybe it’s the stage where they can take more chances. Now that’s the kind of theatre I like.

The current offering du jour is The Model Apartment by Donald Margulies. Yes, I know, and you know, of the prolific and talented Mr. Margulies, and you probably love him. He’s a favorite. But I hadn’t heard of this particular offering. Is it new? Old? It turns out it premiered in LA in 1988 and years later won an Obie Award for its off-Broadway showing. But it certainly isn’t one of his best known, and it hasn’t been done here in Los Angeles, since.

The scene opens with Max (Michael Mantell) and Lola (Marilyn Fox) entering their newly purchased retirement condo in Florida (fantastic design by Tom Buderwitz), in which they will be spending their twilight years together. Actually, it isn’t their condo exactly, because it isn’t finished just yet, it’s the “model home” the developer has offered as a place to stay for a few days while their home is being completed. From an acting standpoint, the two actors are magic in their chemistry together, making it easy to believe in their long marriage together as they speak in half sentences while totally communicating with each other.

The apartment seems to have everything they need to get by for the next few days, until they realize the TV doesn’t work, the radio doesn’t play, and the refrigerator isn’t operational. We then start to become aware of the significant differences between the two. Lola dramatically overreacts to the inconveniences and Max clams up while dismissing the problems. We can tell things are off, but only later realize their extreme reactions to the small issues stem from the fact that they are both holocaust survivors who have experienced much loss in life. Brilliantly acted, sharply directed (oh yeah, by Marya Mazor), and such an intriguing story.

From here, the story blows up. The elderly couple’s private party is unexpectedly crashed, in the middle of the night mind you, by their adult daughter, Debby (Annika Marks), who has obvious but undefined mental issues. She’s boisterous, inappropriate, and very needy. It doesn’t take long to realize Max and Lola may have been running from their daughter as much as craving the Florida sun. As you might guess, Lola handles the frenetic daughter’s spouting off about the Nazis and her crazy dreams and other incoherent thoughts, while Max somehow retreats to sleep in the studio apartment. Once some quiet had been found and everyone has a place to sleep, the homeless and seemingly mentally slow boyfriend (Giovanni Adams) of Debby makes his entrance. Lola’s maternal instincts must kick in when she is compelled to tell the boy the exaggerated, if not made up, stories of knowing Anne Frank in the concentration camps, while Debby mouths the story word for word. Max had heartbreaking visions while sleeping, of his first daughter, Deborah, who was killed during the war. She was a much different daughter in a much less challenging situation. In the end, in an act of desperation, Max calls the police to have his daughter and boyfriend taken away. Lola begs him to ride with his daughter and he declines. In Debby’s final meltdown before being taken away, we realize the horror stories of the holocaust not only haunt the people who went through the experience, but the ones who heard the repeated stories as well.

I don’t know what I was expecting from The Model Apartment, but I wasn’t expecting this, which is great! Being surprised by theatre is a gift.

However, I wrestled with a couple of things about the production. One was the change from the subtle and truthful beginning to the borderline farcical middle and end. Maybe it’s impossible to maintain the subtlety in such a production; a mentally challenged person isn’t always subtle and their caregivers might not have the option to handle them “subtly” either. But something about the production took a turn into slightly untruthful/BIG acting land. I’m nitpicking because I truly believe the acting was quite good. This duty (I’ll refrain from using the word, blame) may rest squarely on Ms. Mazor and her directon. Or perhaps the larger-than-life turn the production took was due to the fat-suit! We, the audience, knew the actor playing Debby was wearing a fat suit, and it was a little over the top in it’s bottom heavy shape. My guess is there is a little (ok, now I’ll say it) blame to go all around on the heightened turn the production took and it was an aspect I didn’t love.

The other question I had was whether this production passed the “so what?” test. The Model Apartment wasn’t created for entertainment sake, so I’m lead to believe it was to enlighten or educate. What was my takeaway? I’m not sure. But I can say that it was good story telling and 90 minutes well spent. I’m still pondering what my lesson will be. In the end, that’s fine with me. Here’s a portion of what Mr. Margulies said on the topic, “I don’t think that it’s just a portrait of holocaust survivors. I think it’s really more about family and everyday lives in the shadow of enormous historical occurrences. That’s what I want people to leave with. To contemplate that.”

You should definitely go see it and decide for yourself what you think. Isn’t that what theatre is all about, anyway? YES, yes, a thousand times yes.