Theatre Review- Once The Musical 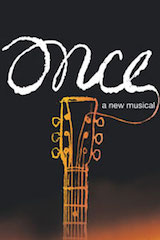 It’s summer and love is in the air.  Or, love may not be in the air but perhaps you’d like it to be floating in the atmosphere for at least an hour or two: maybe a love story with some great music, maybe a handful of inspiring musicians…  Does this sound like something you’d like to check out?  I may have a show for you, but you’ll need to act quickly.  It’s only around for a few more days.

Once, the musical, currently playing at the Pantages will be running though Aug. 10th.  Yes, it’s the one based on the 2006 Indie Film with the same title, directed by John Carney.  Glen Hansard and Marketa Irglova (of The Swell Season) wrote the music and lyrics and music for the film.  Those are the real-life two Guy (Stuart Ward) and Girl (Dani de Waal) were based on.  Haven’t seen the film?  Neither have I.  Don’t worry about it.

Once is a simple Dublin romance where we have Guy, a guitar-playing/singing busker with a broken heart. Guy meets Girl.  Guy and Girl share a love of music (she happens to play the piano and sing like an angel) and make fabulous music together.  Over one short week, they spend time experiencing the feelings of former love and loss… possibly fall in love, and separate.

Here’s what’s stellar about this show:

The MUSIC.  It’s just amazing and *the* reason to see the show.  If you are a fan of the tunes of The Swell Season, just get your tickets now.

The PERFORMERS.  Wow.  Everyone in the ensemble plays at least one instrument brilliantly—and some more than one.  Don’t you just hate the super-talented musician types?  And I suppose this is the time to disclose the fact that this isn’t a two-person show.  Girl helps Guy put together a band comprised of locals to join him in the recording studio before heading off to fulfill his dreams in New York.  I’m listing the ensemble–all of them, with their instruments: Raymond Bokhour (Mandolin), Matt DeAngelis (Guitar, Mandolin, Banjo, Drum Set, Percussion), John Steven Gardner (Piano, Guitar, Percussion, Melodica, Harmonica) Donna Garner (Accordion, Concertina), Evan Harrington (Guitar, Percussion, Ukulele), Ryan Link (Guitar, Banjo), Benjamin Magnuson (Cello, Guitar), Alex Nee (Electric Bass, Ukulele, Guitar, Percussion), Erica Swindell (Violin, Percussion), Kolette Tetlow (played no instrument, but was a heck of a cute kid) and Claire Wellin (Violin).

The BAR.  You are going to want to arrive early.  The normal bar tables set up in the lobby of the Pantages are mysteriously closed.  Instead, the audience (21+) is invited up on stage to have a drink.  The ensemble is mingling and eventually starts playing Irish bar songs as drinks are had and audience members take their seats.  Cool, cool, cool.

I loved the bar idea and I liked the very simple set (Bob Crowley) a lot.  It’s set up as a bar that also becomes a very simple store, recording studio, etc. etc.  Not the normal big musical set spectacle, but I found it refreshing.  But truthfully, the show probably would have played better in a smaller venue.

The length of the show.  Not because I can’t sit for 2 ½ hours, but because there was extra stuff that made it drag.  Some secondary story lines just didn’t need to be there.  I think they should have trusted the love story line between the Guy and Girl would be enough, because it would have been, and it would have been better.

There was some pretty unconventional dance/movement included the show.  As a former dancer, I normally encourage out-of-the-box movement choices.  This played a bit awkward.  Perhaps because it was just too different.  It may just be me and my lack of an open mind, but I say the weird interpretive dance was, well, weird.

In the end, it’s a sweet love story.  It’s astonishing music with amazing musicians.  What more do you want, really?  Go see it before it’s too late.

Tickets: ticketmaster… but there are TONS of discount tickets out there.