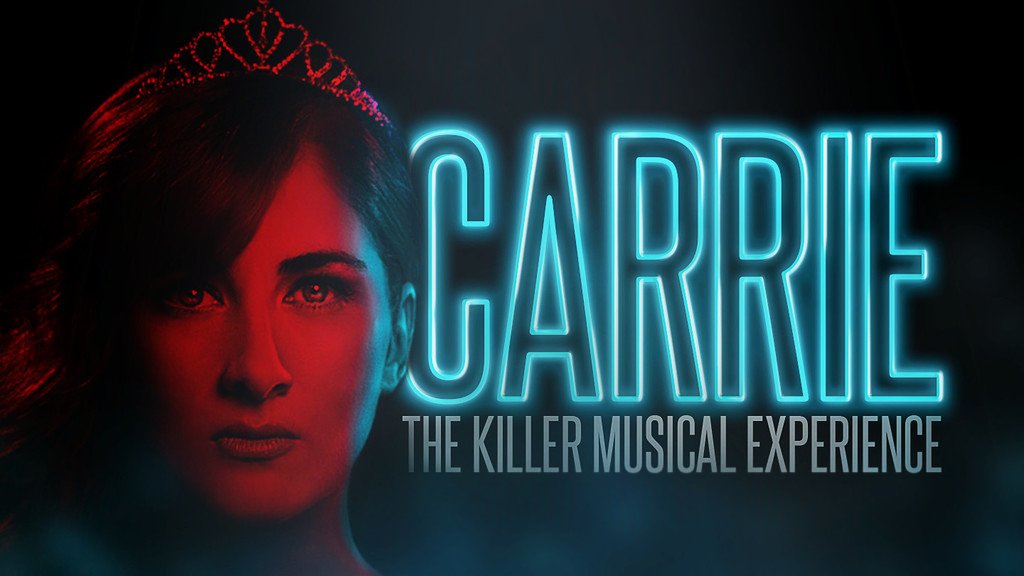 I’m not going to beat around the bush.  Carrie The Killer Musical Experience onstage now at the historic Los Angeles Theatre is not a piece of high art nor a very good musical.  DON’T STOP READING.  I know, I know, I just said the musical isn’t very good.  The original Carrie the Musical opened on Broadway May 12, 1988 and closed May 16, 1988.  That was not a typo.  It had a 5 day run (and 16 previews to be fair).  There was a revival (with revisions to the show) in 2012 that was only slightly more successful.  It had a run of about a month.  This is not a secret.  I’m not the only one with the belief it’s a crappy show.

So this not-so-good musical is on stage here in Los Angeles, running now, and I’m here to tell you…go get yourself a ticket.  It is Carrie The Killer Musical Experience after all.  Experience being the key word.

First of all, it’s a creepy time of year.  If you are not be ready to say goodbye to this ghoulish time just yet, this is perfect for you (and all the pals you can wrangle up).  And I’ve mentioned it’s in the historic Los Angeles Theatre… and by that I mean amazing, ornate,  crazy beautiful, grand and strange LAT.  Go early and look around.  It’s decked out to enhance the “experience.” And remember, you are going for the experience.  The seating arrangement in the actual theatre is clever.  There are sections based on grade level (sophomore, junior etc.) which is cute, but you should note that springing for “senior” seating means you will be right there in the action at times.  Fun for some, not so much for others.  All in all, pretty harmless.

The stage/staging is a multi level one, which is cool.  It’s actually a thrust stage for you theatre geeks, which is probably my favorite situation.  Big bummer that they (and by they I mean Brady Schwind, director, and the less guilty Lee Martino, choreographer) treated it, for the most part as a proscenium.  I was sitting on the side, in the junior section I believe, and I saw a lot of sides of faces.  A lot.  It’s a pet peeve.

The stagecraft was pretty delightful.  I don’t want to give everything away so I’m purposely being vague. But there’s some pretty fantastic stuff.  The experience, remember?  The stagecraft is certainly helpful in that endeavor.  Props to the sound gal Cricket S. Myers, light guy Brian Gale and set fellow Stephen Gifford.

The story is just as you remember: teen girl with crazy religious upbringing gets bullied and made fun of at school, super religious mom isn’t helpful/makes things worse.  Girl works on her telekenisis skills.  One nice girl in school has her boyfriend ask teen girl to the prom… she says yes.  The night goes terribly wrong.  Ends up a bloody mess.  I haven’t read the novel nor seen the movie, but according to the opinion at large, those options are the go-to for the best telling of the Carrie story.  Remember, the book, music and, lyrics aren’t the draw here.  If you accept this from the get-go, you’ll be a much happier theatre goer.  The good news is the cast is pretty darn good. Emily Lopez as Carrie has the pipes and the chops, Misty Cotton as mother has a terrible wig but a stunning voice.  The nice girl in school, Kayla Parker, her boyfriend, Jon Robert Hall, and the super mean girl, Valerie Rose Curiel were all lovely!

It’s a super experience with a solid cast performing a so-so to bad musical.  But I stand by my recommendation to go see it.  Bring a pad to sit on (you’ll thank me) and don’t be late.  Now you’ve heard it all.

$40 and up (look for discount tickets)