Theatre Review: A View From the Bridge 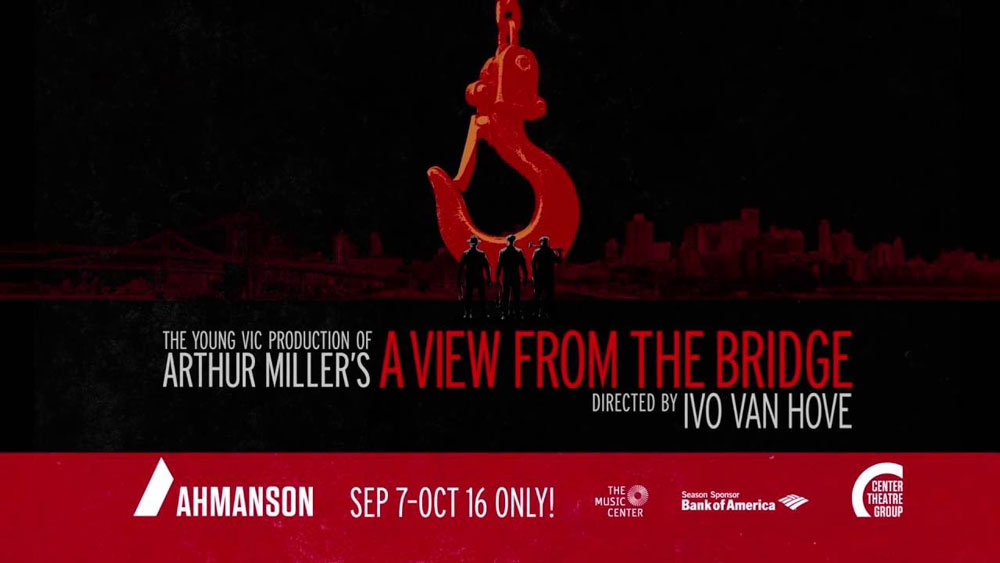 Are you ready for a two hour play adaptation by great American playwright, Arthur Miller, brought to you by much loved Belgian director Ivo van Hove? Well, get ready. A View from the Bridge is on stage, albeit a very bare stage, at the Ahmanson Theatre after a run on Broadway, winning some Tony Awards, premiering in London, and winning a handful of Olivier Awards. True, awards and well known names aren’t everything, but in this case, they add up to something good.

I’m a big fan of good actors and have been known to recommend mediocre shows for the good acting alone. And please don’t misunderstand, there’s some very fine acting in this show, but you’ll want to see it for it’s concept. It’s Bridge meets Greek Tragedy, and it’s a humdinger. The stage is lined on three sides with a clear bench, and the dark wall upstage has about four stairs to a door (how very greek tragedy chic!). Due to the sheer lack of set, the show rests on the words, the actions, the silence, the emotion . . . with powerful lighting (Jan Versweyveld) and ominous sound (Tom Gibbons), which telegraphs impending doom from the very beginning. There’s no attempt to hide the outcome of this tale, and I’m in full support of the choice.

I had yet to ever see A View from the Bridge and somehow managed to steer clear of the storyline. It isn’t one of Miller’s very best plays, but I have to say it absolutely holds up and I had no problem staying involved for the two hour show. The simple story centers around a hardworking Brooklyn dock worker, Eddie Carbone (Frederick Weller), and his wife, Beatrice (Andrus Nichols), who have raised her niece, Catherine (Catherine Combs), from a young age to almost adulthood. Eddie is fiercely and inappropriately protective of Catherine as his not-so-hidden sexual desire is becoming harder and harder to repress. Beatrice introduces a potential job offer and the opportunity for Catherine to move out on her own, which is met with great disapproval from Eddie. The manner in which Catherine jumps into Eddie’s arms upon each greeting and his hand on her thigh when they chat doesn’t leave much room for pondering whether there could be an increasing problem. The fact that Eddie and his wife haven’t been intimate in ages just adds to the obvious problem.

On top of the already present family issues, the Carbones are “welcoming” two illegal immigrants from Italy into their home, which is commonly viewed as their duty, being Italian-Americans. Eddie promises to protect the new arrivals from immigration and help them find work. Marco (Alex Esola) plans to send money home to his family and return when possible in a handful of years.  Rodolpho (Dave Register) has no one to provide for, so his plan is to work, have fun, and stay in America as long as possible, if not forever. Catherine is immediately drawn to Rodolpho and Eddie starts to unravel.  First Eddie challenges Rodolpho’s motives in courting Catherine, suggesting that it is for citizenship alone, and when that doesn’t work, he questions his sexual orientation. Catherine is unswayed and she and Rodolfo plan to marry. You can imagine the extremes Eddie will go to prevent the marriage as his jealousy and desperation increases. There is no spoiler when I say Eddie’s actions end in bad, worse, and the worst consequences which destroy all lives involved. All the events are narrated Greek chorus style, by the lawyer Alfieri (Thomas Jay Ryan), who can  see the tragic events coming, and is powerless to stop them.

The non-existent set allows for some fascinating visuals. The play opens on a steamy shower scene (no, no nudity), where the dock workers are cleaning up after their day – really impressive. The play ends with a visual that you’d expect in any Greek tragedy, or perhaps even opera. Yes, we are talking operatic-proportion visuals. There was a problem, however, with always being able to see the fantastic visuals – the Ahmanson was, I believe, the wrong choice. The audience was seated on stage stadium-style (serving as onlookers and potential judges of the action), as well as in the normal auditorium seats. From my vantage point on the floor, I missed some action upstage and couldn’t quite decipher the grand finale bang-up-visual until I stood when applauding. That’s simply not good. This show screams for an intimate setting. The Taper is set up stadium style, really, and the Kirk Douglass could have provided the most intimacy with the biggest potential to do . . . whatever! Did they choose the Ahmanson for the potential to bring in the most money? Ugh. Whatever the reason, the venue was the wrong choice and a BIG wrong choice.

Despite the choice of venue being a problem, A View From the Bridge is a thoroughly enjoyable theatre experience for it’s concept alone. Add great direction, fantastic acting and a good story to the aforementioned great concept, and you’ve got a show you should see. Get thee to the (ugh) Ahmanson, NOW!