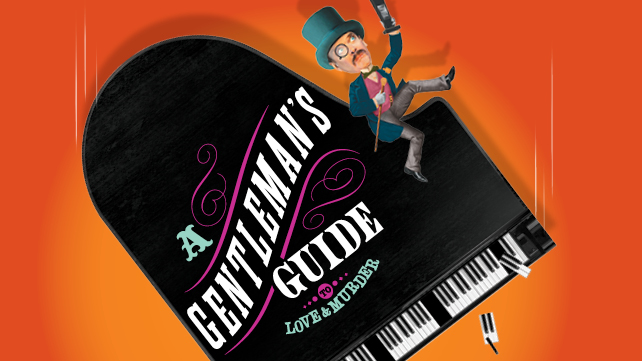 If you are paying attention lately, there’s plenty to be concerned about: the presidential election, racism, terrorism. UGH. I know. I’ll stop. I think we can all agree that a serious dose of silliness is in order for just about all of us. Lucky for the Angelinos, A Gentleman’s Guide to Love & Murder on stage at the Ahmanson is here to save the day.

Theatre has many superpowers, one of them is to transport the audience to a better place. So, off we go to Edwardian London. Under the delightful Tony-award-winning direction of Darko Tresnjak, we meet Monty Navarro (Kevin Massey) after attending the funeral for his mother. An unexpected and unknown visitor, Miss Shingle (Mary VanArsdel) pays him a visit with intriguing news. It turns out she happens to know Monty’s mother was disinherited by her wealthy family, the D’Ysquiths, ages ago for marrying a Castilian musician for (gasp!) love. Miss Shingle informs Monte that he is eighth in line to be the Earl of Highhurst.  With hope of being welcomed back to the family and a bit of their fortune, he immediately pays Sibella (Kristen Beth Williams), the girl who holds his fascination, a visit to inform her that he may be a man of importance. Her response: to draw his attention to her new pink dress. Isn’t she a keeper? Her fascination obviously lies more with herself than anyone else, and she informs Monty that she will be marrying a rich rival suitor.

You can be the judge if this is the motivating factor that sends Monte on a mission to be brought back into the D’Ysquith fold. He, as expected, is immediately shunned by his estranged family, and he sets off to meet and murder each of the members that stands in the way of him becoming Earl. Murder? This is where we are being transported? To the story of a serial murderer?  Think of it as a story of murder (plural, actually; murders!) filled with shenanigans, glee, and love; there’s a little love in there, too.

I’ve been singing “Poison in My Pocket” for days now, BTW.

A Gentleman’s Guide… is a farcical romp packed with jokes and goofy songs, hilarious physical comedy, and clever theatrical stagecraft (by Alexander Dodge), with laughs throughout. John Rapson steals the show (followed closely by the rest of the cast, truly) with his portrayal of all eight D’Ysquiths that stand between Monty and the Earl title.

This is a new musical (winner of the Tony for Best Musical in 2014, along with a zillion other awards), but was based on the 1949 movie of the same name, which was, in turn, based on the novel Kind Hearts and Coronets, and utilizes all the best practices of old school musical theatre. If you’ve ever found yourself saying, “they don’t make them like they used to!” or have sat through a few too many lackluster new-school musicals, this is the show for you. You will howl during “Better With a Man,” and “I’ve Decided to Marry You” (the number performed at the Tonys) is all it’s cracked up to be. My only complaint (really the only one) is that it was too long. I don’t care if musicals used to be three hours long. Can’t we aim for 2 hours? 90 minutes and you’ll have my heart.

I went to the theatre with no expectations and was absolutely delighted. You can have all the expectations in the world, and you’ll still be delighted. Get over to the Ahmanson Theatre and get away from the real world’s bad news for awhile.

A Gentleman’s Guide to Love and Murder