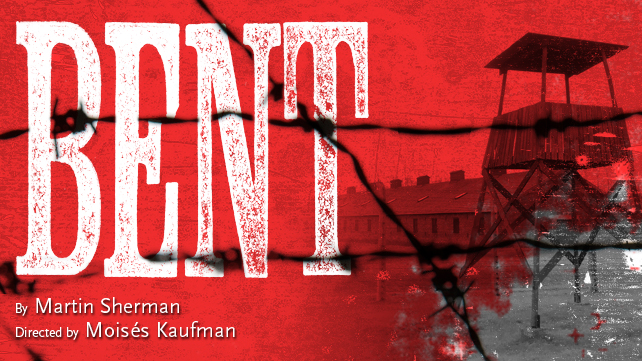 Sometimes theatre educates.  On occasion we have the opportunity to learn something we didn’t know through the medium of theatre.  Often times when I am enlightened as an audience member of the theatre, it’s an expanding of my perspective… it’s a broadening of my understanding or the ability to see something from a different point of view.  On rare occasion, theatre may introduce us to events in history that are not well known.  Bent, currently running at the Mark Taper Forum may be an example of just that.  It was for me.

We all know of the horrifying events in Nazi Germany when Jews were gathered in concentration camps, persecuted and killed for being just that, Jews.  It’s a disturbing time in history that we all learned about to varying degrees in history class.  What you may not know is that homosexuals (and gypsies and communists, actually) were rounded up and brought to concentration camps as well.  The Jews wore a gold Star of David on their uniforms… the homosexuals were given a sewn on pink triangle badge. Depending on your age, you’ll realize the same pink triangle was claimed as a gay rights logo in the 1980’s.  I had no idea.  Did you?

Martin Sherman wrote a profound and controversial play on this topic that premiered on London’s West End in 1979 starring Ian McKellen, and on Broadway in 1980, with Richard Gere.

It’s Berlin 1934, after a serious night of partying; the play opens on Max (Patrick Heusinger) dealing with a hangover.  He quickly realizes (with the help of his boyfriend, Rudy (Andy Mientus)) that he didn’t come home alone.  He’d brought with him a gorgeous Nazi soldier.  It’s not long before we, the audience, witness the soldier’s violent murder, Max and Rudy on the run, their capture, and find them on a train to Dachau.

This show isn’t going to be for everyone.  It’s not going to make you comfortable.  Maybe it’s shocking enough to learn that Nazi’s persecuted homosexuals, too.  Maybe you are fine to google some info on the subject.  Having it played out in front of you live on stage is brutal.  But I encourage you to take the challenge.  This is an important show and it’s really, really well done.  Moises Kaufman (Tony and Emmy nominee) is wearing the director hat, and for those of you who are familiar with his work know he can be trusted.  The show isn’t really about homosexuals in concentration camps.  It’s actually about two men, Max and Horst (Charlie Hofheimer) who meet in route to the darkest moments of their lives… who struggle together to survive.  And love.  It’s about love.  And how love can cover all… and can truly provide transcendence.

The cast is fantastic, shame on me for not mentioning them all.  The set (Beowulf Boritt) is simple but versatile and intriguing.  It serves the piece well.  The lighting (Justin Townsend) and sound (Cricket S. Myers) were appropriate in setting the dark but somehow hopeful story.  It’s a long one… 2 1/2 hours.  It was written quite a while ago, when they were doing that.  But it didn’t drag.  I cared about what was happening every step of the way.  And I think you will, too.  Be prepared to be challenged, be prepared to be touched.  Summons your courage to be enlightened on an uncomfortable subject, and go.