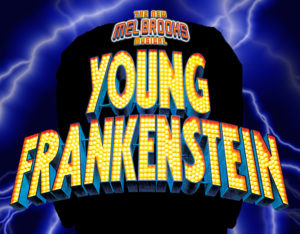 It’s getting darker, sooner.  It’s cooling down.  You may be suffering blue feelings of another summer gone.  Things are picking up in the industry and perhaps the feelings of stress are starting to wear on you.  You can eat some leftover Halloween candy to lighten your mood or have a glass of wine.  Maybe you lean healthy and gravitate towards a yoga class or hitting the gym.  I’m not here to make a judgment on any of these choices, but I’d like to throw another option into the ring.

Young Frankenstein (the Mel Brooks musical).  DOMA Theatre Co./The Met Theatre.  Extended through Nov 30th.  Be there or be square.

Now, I must admit, when I arrived on a Friday night I wasn’t in the best of moods.  I was tired and just wanted to climb into bed and watch some bad TV with a pint of ice cream.  Instead, I was at the theatre. To get the bad news out of the way, parking at the Met Theatre is rough.  Plan ahead time-wise and either park at a meter on Santa Monica or head into their suggested $6 lot, which is still a distance away from the theatre.  Looking for residential parking is a waste.  Wear good walking shoes.  The lobby is small and will likely be filled with people waiting for the house to open.  The good news is, there is a bar in the corner with snacks, water, wine, and $5 grey goose vodka cocktails… all of which can accompany you in the theatre.

From here on out the news is good, good, good.  You are in for a delightful evening of smiles, chuckles and guffaws.  If you aren’t familiar with the well-known 1974 movie, it isn’t a problem, and if you are, it isn’t a problem.  The stage version isn’t the film, of course, but how could it and why should it be?  The story follows Dr. Frederick Frankenstein (John David Wallis) who travels to Transylvania after the death of his grandfather, Dr. Victor von Frankenstein, to take care of the inheritance details.  He has worked hard in his career as a brain surgeon to distance himself in all respects from his grandfather, even going as far as pronouncing his name Fronk-en-steen.  He planned to be in and out of Transylvania as quickly as possible.  But after meeting his would-be hunchback assistant, Igor (Scott Seiffert) and his could-be saucy lab assistant Inga (Susan Huckle), the stern housekeeper Frau Blucher (Michelle Holmes), his ghostly ancestor (Braley Kuykendall), and MANY zany songs and a dance or two later…he decides to stay and carry on his grandfather’s creepy work.

Young Frankenstein is as silly as you’d expect.  And as sophisticated as you are…you won’t be able to resist the sophomoric humor.  The leads AND ensemble are great.  The monster (Hector S. Quintana) is lovable and can’t be missed in his platform boots tap dancing away in the second act.  Come on! There’s a tap number with a monster in platform shoes?!?  This truly is a must see.

The show as a whole is the perfect mix of surprisingly high production value (scenic design: John Iacovelli, lighting design: Jean-Yves Tessier, sound: Julie Ferrin, and costumes: Brandy Jacobs) with a campy, low-budget essence.  Director, Marco Gomes moves the 2.5-hour production ahead at quick pace and the choreographer (Angela Todaro) geared the clever moves to the strengths of the cast.  Thank God. If I could send in one wish, it would be to remove the comic bits that just never came together.  There are a few.  And at this point in the game, they aren’t going to.

But I can’t end on a sour note.  It’s a silly, fun, fantastic evening… worth dragging yourself to even if feeling tired, stressed or blue.  It will turn you around, guaranteed.  And if you aren’t already a believer, kick DOMA some extra cash and have them make a cocktail to take in with you.  That will kick start your funny bone while further supporting your local theatre company.