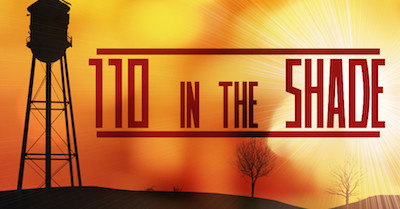 I wasn’t familiar with 110 in the Shade.  It’s a musical based on the better-known and beloved play, The Rainmaker, by N. Richard Nash.  The music by Harvey Schmidt and lyrics by Tom Jones (the guys behind The Fantastics) did raise my expectations, even though I hadn’t heard of it.  But I’m one of the odd theatre lovers who isn’t the biggest fan of the Lizzie Curry/Bill Starbuck love story set in a small depression era town in the midst of a terrible drought.  So I really didn’t know how this was going to go.

In case you are unfamiliar with the story, we have Lizzie Curry (Treva Tegtmeier) who lives with her father, HC (Tim Hodgin) and two brothers Noah (Jason Peter Kennnedy) and Jimmy (David Crane) who seems to be destined to be an old maid.  Her only real prospect is the Sheriff, File (Michael Downing) who has been burned by love and is pretty clear about not giving it another shot.  With her high standards and low self-confidence, she’s just about given up hope when a charismatic stranger arrives in town.  No one is sure whether the mysterious Bill Starbuck is a con man or a dream come true with his promises to bring rain, but he single handedly builds the faith of the town and in the heart of plain Lizzie that love is a possibility, even for someone like her.

There were some things I loved about this show:

I love the small thrust stage at the Actor’s Co-op… and by the way, that’s where you can catch this show running through June 15th.  Even more, I love viewing a musical on a stage like this.  It is a rare thing to experience a musical up close.  You are in the middle of it, and it really works for a show like this.

I loved the voices and… over-all the talent of the actors.  It might be a stretch to say they are all triple threats, as the close quarters don’t really lend itself to big fancy dance numbers.  But they can all sing the catchy songs beautifully… and a good majority had the chops to pull off the roles.

I loved that there was a live band.  There was a piano (played by Bryan Blaskie, who was also the musical director and conductor) guitar/banjo, clarinet/flute, bass, and drums.  What a treat.  They were fantastic.

Spoiler Alert! Spoiler Alert! Because I believe most of you theatre-types are familiar with the story, I’ll go ahead and say… I loved that it rained.  It rained actual drops in the theatre and it was magical.

Things that could have been better:

While the singing was good and the overall acting strong… I thought the cast was a bit odd.  I’m not sure if that has to do with the fact that it is a company of actors and they aren’t casting from the giant LA pool.  Or?  It’s not that they are unskilled at all, just an odd bunch.

Overall I believe the direction was solid, thanks to Richard Israel.  But I would say he missed the opportunity to reign in the important Starbuck (Skylar Adams) performance.  The obviously talented Mr. Adams is likely used to performing in monster venues… where musicals are usually found.  He just needed to pull back, and I think that responsibility rested squarely on the director’s shoulders.

Things that I didn’t love at all:

While I can say that I did enjoy my experience with 110 in the Shade much more than my times with The Rainmaker in the past, I still have distaste for the overall message that Lizzie (and women in general) can’t have a complete, lovely life without a husband… without a man.  It’s hard to really rally behind that message and therefore difficult to summons the masses to see this show.

But it’s good and fun… and if it strikes your fancy, you should go.