Theatre Angel: 5 Top Tips On How to Win At Independent Theatre, Part III

In honour of the Edinburgh Fringe, Casting Networks Australia’s Theatre Angel brings you a three-part, jam-packed bumper special in celebration of independent theatre!

You can read Part I here: http://blog.castingnetworks.com/12181/

Synopsis: “Tiffany’s mum got hit by a Birdseye truck on the M25. There’s family to call and a coffin to order, but first she has to talk to her dad – and for some reason that’s the toughest thing on her to-do list. Meanwhile, on the doorstep, an oozing paper bag holds a dying wish that will either bring father and daughter together, or drive them further apart. In her visceral play about family, grief, and red meat, Sarah Kosar asks how far we’d go to reconnect with the ones we love most.”

In the intimate, theatre-in-the-round space of London Haggerston’s Archivist Gallery, the audience clusters around a small, bright, clean space in the unusually sweltering London heat. Without revealing the play’s main spoiler, it is safe to say that its subject matter is confronting, revealing, and perhaps for some, all too close for comfort. Searing into the audience, the strong, yet subtle two-hander pierces right into the heart of what is most raw, powerful, and personal—love, loss, pain, family, and morality.

In the wrong hands, the play’s beautifully-woven intricacies could border on flippant, even grotesque. Director Tommo Fowler, and cast Lindon Alexander and Rosie Wyatt, however, gracefully work with the text without imposing or detracting from its voice. Though only a cast of two, the stream-lined Spartan stage flanked by peach drapes, the intermittent, dreamscape-esque flashing multi-media lighting and sound, the interspersions of Tiffany’s spoken word performances and the text itself – all act as additional presences in the play. The effect is both subtle and, at times, deliberately abrasive, challenging, and heartwarming.

Both actors deliver focused, brave performances, with Rosie Wyatt’s tightly-tuned, bold yet vulnerable Tiffany creating a lovely contrast to the more gentle, measured, and reflective Hugh, beautifully played by Lindon Alexander. The multiple dynamics of the father-daughter relationship are played out like an orchestral rise and fall around the stage’s centrepiece of a single refrigerator. The effect is confronting, yes, but all the more pertinently so. The audience exist in the air the characters breathe, in their walls, their spaces in between, so they are one with their grief, their loss, and their hope. The effect is profoundly moving, and so much more than a traditional “third-walle,” large stage of “park and bark” acting.

Mumburger is a beautiful play. It is provocative, yet in all the right ways. Never does it descend into easy fixes of shock tactics, but opens the gaping wound of loss and invites the audience to stare deep into the chasm of their own consciousnesses. It is touching without being depressing, moving without being self-indulgent, thought-provoking without being alienating. In short, it encapsulates all that theatre can aspire to—with just the bare boards and human performance, it draws us into another world to touch and change our own.

Sarah Kosar is an American playwright living in London. She has been a part of The Royal Court 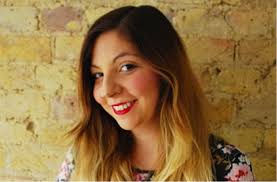 Young Writers Programme, Studio Invitation Group and Summer Group, as well as The Soho Young Writers Lab, Lyric Young Writers Programme, and an Associate Writer with the Hampstead Theatre. Her play Hot Dog is part of the Pennsylvania State University’s syllabus for Advanced Playwriting and Women in Theatre courses. Sarah has a BA in Theatre, a BA in Film from Pennsylvania State University and a MA in Writing for Stage and Broadcast Media from the Royal Central School of Speech and Drama. Sarah has recently been granted an Exceptional Promise in Playwriting visa in the UK. Sarah is the Inaugural Writer In Residence at The Archivist’s Gallery, Hagerstown. Sarah is also the producer and host of the iTunes New and Noteworthy podcast, Kin.