The Genius in Daydreaming 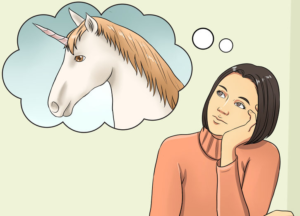 In late 2006 I spent three incredible weeks in Québec observing the creation process of Ex Machina, the company founded by internationally acclaimed theatre actor-director Robert Lepage. The company’s work is often described as cinematic, an intended compliment, but one Lepage actually loathes.

A tradition of equipping actors with head mics, so they can speak naturally instead of projecting, plus integrated use of multi-media and techniques that offer visual perspectives and varying frame sizes without audience members actually moving from their seats, leads critics to label the work cinematic. Yet Lepage would argue that he is simply using every device possible to communicate his vision, which just happens to occur on stage.

Labeling Ex Machina’s creations cinematic is less of a compliment to Lepage than it is an indictment of the run-of-the-mill companies to which audiences have unfortunately become accustomed.

In one of Ex Machina’s earlier shows, The Far Side of the Moon, I watched in awe as the show closed with Lepage’s character floating up into space before our very eyes. No ropes or wires, no hidden apparatus; he just seemed to drift up and away into the darkness above. The effect, to the audience, was miraculous, but to Lepage it was merely the result of seeing a possibility that was visible to anyone that cared to turn and look.

On my visit, I made a point to ask about this effect and how it came into being. Lepage said that one day the cast and crew were working with the mirror as a backdrop in rehearsals, but it was so heavy that they decided to lower it to the stage and rest it on an angle as they took a break. When they returned, the actors sat in the auditorium as the technicians made minor repairs to the set. One called to the other to roll over some gaffer tape, which turned and headed towards the audience instead of the other technician. Every person in the room watched the tape on the floor, but Lepage, like the naughty child staring out the window during class, watched it in the mirror. It seemed, to him, to float up into the air. This daydreaming moment spawned one of the most magical experiences that I’ve ever had in a theatre. 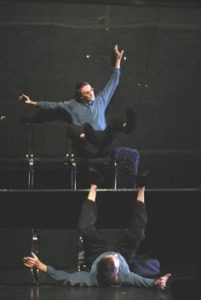 Lepage, by his own admission, is not uniquely gifted with the ability to see what doesn’t exist, he simply finds himself looking where others don’t. Critics see this as a kind of genius. Curiously, this is exactly how we discover, create, and see things when we play as kids. Could it be that we all possess a touch of genius and have since our childhood?

Lepage smiled as I told him of the Spider-Man movies I made with my friends when we were kids. We took pictures off the hallway walls and placed them on the floor, then put chairs sideways against the wall, as though the whole room was on its side. With a big old VHS camcorder placed on its side at the end of the corridor we would then crawl on the floor, which looked in the final picture as though we were climbing the walls. Our parents couldn’t believe what they were seeing in the final video. How could we be so creative?

It wasn’t incredible to us, it was just fun. We were playing.

We frequently overlook the potential magic humming around us because we are so programmed as adults to perceive things with a kind of crippling tunnel vision. Adults mostly see things as they will be, as they should be, whereas children see things as they could be, as they might be, if we let them. Curiosity is often smashed to smithereens by repeated conditioning to pursue objectives, be they beat-by-beat or lifelong, and having our noses buried perpetually in perception-narrowing electronic devices compounds this myopia.

To see the unseeable, one must first accept that every inspiration, creation, and potentially groundbreaking innovation is already in existence, but only some of us are looking beyond our own conditioned field of perception.

I bid a sad farewell to Ex Machina at the end of my life-changing three weeks and Lepage offered some parting advice. “It’s all there, but only some people see it,” he told me. “Everyone can, but only some of us do.”

As he turned to walk away, the world around me seemed more electric and alive than it had since my childhood. I’d swear he then floated up and away into space, but I could have just been daydreaming . . .