The Audition Room as a Playground

For lots of actors, especially those just starting out, entering an audition room is a nerve-wracking experience. You spend all that time wishing for your big break, hustling your agent or diligently doing your own detective work to find suitable roles, working hard to get that invitation to audition… and then when the opportunity arises you lose sleep, are a bag of nerves, don’t enjoy the experience and walk out of the audition room wishing you had done a better job.

Overcoming this kind of anxiety can boil down to two main areas – Preparation and Mental Attitude. 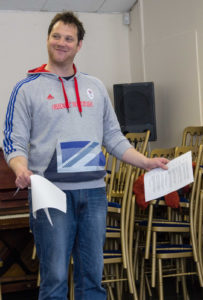 Preparing for an audition should occur long before the appointment arrives.In fact, you can start preparing for any audition today, right now, or at least as soon as you finish reading this. The first thing you have to master is learning lines. And the only way you can do this is by… learning lines. Every single day. Without fail. It should be as natural a part of any actors daily routine as brushing teeth or making that first cup of tea or coffee in the morning. Pick a page or two of dialogue from any script that you can easily download and learn it. Test yourself at lunchtime, test yourself again at dinner time. If you do this every day it won’t take long for your memory muscle to grow big and strong. You’ll relish getting new material to learn and enjoy the challenge to keep your muscle toned. And then when the invitation to audition comes through, learning lines is the least of your worries.

And then the specific preparation begins – read the script, look at the role, think about the character – how can you make it interesting? How can you make it believable? Try to read the entire script so you can understand the tone of the piece, look at where your character appears – the scenes before, the scenes after. Make bold choices. Tape yourself trying it lots of different ways and watch the scenes back. What worked, what didn’t? You have to put the time in now, before the audition. It doesn’t matter how big or how small the role is – it may look like a one line part in a student film, but really it is a job interview for the whole of the rest of your career. One job invariably leads to the next – so don’t skimp on really thinking about the role and preparing thoroughly.

Once you’ve learnt your lines and figured out how you’d like to play the role then it’s time to focus on your Mental Attitude and how you approach the audition. The audition room isn’t a gladiatorial arena, it’s your playground. It’s the place where you get to show off your acting talent, something you hopefully love. We’re not there to trick you or make you look foolish, we’re not your adversaries – we want you to be brilliant, and we’ll try to help you as much as we can to deliver your best performance. You should think of the audition room as a safe place – a place where you can play, where we can encourage you to take risks and even make mistakes, to explore and create together. Most of the time we’re looking for you to show us who the character is – it’s likely that we don’t really know – it’s only when an actor comes in and owns a role that we see it as a real human being – and there’s nothing more satisfying in an audition room. So take ownership, and enjoy enlightening us – help us see that there is no-one better suited at playing the role than you. Because you are the role.

So when you walk out of the room you’ll have no regrets, you’ll feel that you’ve done everything you can to help us – and then you have to immediately forget all about it. There’s no point fretting over something you can’t control. Move on to the next role, or go back to learning lines. Get together with actor friends and perform just for the heck of it and not because anyone is watching.

One last thought that should always be in the back of your mind – try to remember that every single actor – every single one – started with an audition at some place and at some time – John Gielgud, Meryl Streep, Daniel Day Lewis, Maggie Smith, Tom Hanks, Kate Winslett, Tom Hardy – they all auditioned, were rejected, and auditioned again and again and again. So when it’s time for your next audition look forward to it – it’s the next step to something wonderful.