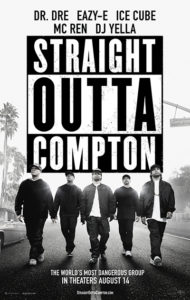 Straight Outta Compton is possibly the most important movie of 2015.  In terms of the topics it covers, including police brutality and racial inequality, it certainly shines a spotlight on how far we still have to go.  On top of this, the film stands as one of the best biopics to come out in years, and has some of the best performances of the year, as well (particularly from its relatively unknown stars).  Director F. Gary Gray delivers a highly entertaining and remarkably visceral telling about one of the most influential groups the music world has ever known.

The film opens in 1986, with Eric Wright, a.k.a Eazy-E (played by Jason Mitchell, in a breakout performance) as he sells drugs to a house full of dealers and addicts.  Things quickly escalate, and soon, guns are drawn and a cavalry of police come barreling through the doors.  Eazy-E is able to get away, the scene ends as the carnage in the house reaches its pinnacle, and “STRAIGHT OUTTA COMPTON” appears on the screen.  The scene is explosive, and right out of the gate, we know what kind of movie we are about to watch.

We are soon introduced to Andre Young, a.k.a. Dr. Dre (played by Corey Hawkins), a DJ with dreams of making it big, living at home in Compton, trying to be a good influence for his younger brother Tyree (Keith Powers), and trying to support his girlfriend and an infant son.  Next, we meet O’Shea Jackson, a.k.a. Ice Cube (played by O’Shea Jackson, Jr., a.k.a. Ice Cube’s son).  Hawkins and Jackson are both terrific in their portrayals of the two legendary musicians, and Jackson is the spitting image of his father from that time period.

The film progresses as the three young men (along with DJ Yella, played by Neil Brown Jr., and MC Ren, played by Aldis Hodge) form NWA and begin to make an impact on the local music scene.  Playing to an, at first, skeptical crowd at a club in Compton, with Ice Cube on the microphone rapping his poetic and inspired lyrics, the audience soon becomes incapsulated with what is taking place on stage.  Drawing the attention from manager Jerry Heller (with a great performance from Paul Giamatti), the group soon records their album Straight Outta Compton and begins to receive national attention.  From here, there is drama from within the group, from law enforcement, and from the establishment, as NWA rises as high as they can go before they eventually fall, leaving a lasting legacy.

It’s difficult to watch this movie and not immediately be hit with how relevant it is in today’s culture.  In one scene early in the film, the group is recording their first studio album and they meet on the street outside of the studio for a minute to discuss some things.  Suddenly, two police cruisers surround them and force them onto the ground.  Things begin to escalate, at which point Jerry Heller comes outside, and his line, “You cannot come down here and harass my clients because of what they look like,” is particularly memorable.  While the police eventually leave, this scene (along with a scene in which Ice Cube is confronted by the police for simply walking home, and a scene in which Dr. Dre is arrested after a concert for doing little more than breathing) are apropos to the world in which we live today.  And with much of the later portion of the film portrayed against the backdrop of the Rodney King beating and subsequent trial, thoughts of Trayvon Martin and Eric Garner and Michael Brown and Freddie Gray and Walter Scott and so many other (far too recent) examples of racial violence at the hands of the system are impossible to ignore.

On top of everything else, Straight Outta Compton is incredibly entertaining.  The NWA music played throughout is as fresh as it ever was, and is likely to find a new, younger audience thanks to the film.  Watching how all of their songs came to be (including how the song F*** tha Police came into being, as a direct result from the group’s aforementioned run-in with the police officers outside of their studio—at least according to the film) is a lot of fun to watch.  There is a particularly memorable scene early in the film in which a very inexperienced Eazy-E (he was supposed to just produce their first album, before he ended up being one of the group’s headlining rappers) struggles his way through the recording of the famous line “Cruisin’ down the street in my ’64”, an example of some of the (always welcome and well-timed) comedy in the film.  Additionally, the style of the movie is perfect, thanks in large part to the cinematography by one of the best in the game, Matthew Libatique (mostly known for his work on the films of Darren Aronofsky).  Visually, the film is realistic and gritty, but in the same breath it is cinematic and gorgeous (never quite veering into the documentary-style filmmaking that is so popular these days).  The film works on every level.

The film is long, at 147 minutes, but it never feels overly so, and with three protagonists (with equal weight being given to Ice Cube, Dr. Dre, and Eazy-E), and such an epic scope, you would be hard pressed to find a minute that could be cut from the final product.  The acting of the three leads (and that of Paul Giamatti and the rest of the supporting cast) is top-notch.  And the casting in the film of some of the now-famous rappers that sprang from the NWA influence, like Keith Stanfield as Snoop Dogg and Marcc Rose as Tupac Shakur, fills in the details and makes it seem all the more realistic.  See Straight Outta Compton whenever you can.  And I challenge you not to download the original album the minute you leave the theater.