A TRIBUTE TO DR. WAYNE DYER

“Heaven on earth is a choice you must make, not a place you must find.“ 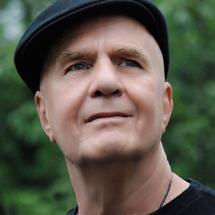 My reality is often not like many others; I’m not a fan of society’s way of thinking, which is the majority buying into the same thought system, without seemingly questioning it?

A Belief System is nothing more than a thought you’ve thought over and over again.

At first glance, this world doesn’t seem to offer much to cheer for…however…

If you change the way you looked at things, the things you look at change.

Pointing my finger at someone, I’ve learned, doesn’t change my situation even if the face of the man changes.

All blame is a waste of time. No matter how much fault you find with another, it will not change you.

My circumstances do not make me what I am, they reveal who I have chosen to be.

I have the beloved Dr.Wayne Dyer to thank for these grand pearls of wisdom. A soul that resonated with mine, when I had forgotten I even had a soul. He was my “go to guy” giving me insight into a world not often seen by human eyes.

He will be missed…by millions.

Dr. Wayne Dyer may have made his transition to another realm, yet, his profound and insightful quotes will live on forever, continually reminding me and generations to come of his Spirit and light that reflected a deep inner knowingness, reminding all of us that we are more, much, much more…than the story we were told…as children…we just need to LISTEN…

You must become the producer, director and actor in the unfolding story of your life.

I’m convinced that some of our greatest and most influential teachers show up in our lives disguised as people we resent or even despise.

How people treat you is their karma, how you react is yours.

Conflict cannot survive without your participation.

You can never get enough of what you don’t want.

You are in a partnership with all other human beings, not a contest to be judged better than some and worse than others.

When you judge another, you do not define them, you define yourself.

Enjoying life is far superior to being graded on your performance in life.

Love is the ability and the willingness to allow those that you care for to be what they choose for themselves without any insistence that they satisfy you.

If you have anything in your heart, that is anything other than love, you’ve got to get it out.

When you are squeezed, what comes out is what’s inside.

Simply put, you believe that things or people make you unhappy, but this is not accurate. You make yourself unhappy.

You cannot be lonely if you like the person you are alone with. 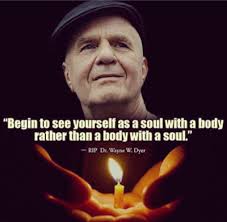 Embrace silence since meditation is the only way to truly come to know your Source.

The highest form of ignorance is when you reject something you don’t know anything about.

Begin to see yourself as a soul with a body rather than a body with a soul.

The last suit you wear, you don’t need any pockets.

Don’t die with the music still in you…

As I sit in silence, I can only imagine a choir of angels singing praises while those who have gone before stand in ovation, applauding and high-fiving Wayne Dyer for fulfilling his purpose here on earth, welcoming him back as he enters the pearly gates; he is in heaven because heaven never left him.

HAVE A QUESTION? I WOULD LOVE TO ANSWER IT IN MY NEXT BLOG!

“I have a passion for travel, unique spas, the outdoors, being surrounded by family and friends, and a love for wine. My dream is to have a cottage in the vineyards where I can write… and share… with that someone special.”