The Perdekamp Emotional Method (PEM) is a relatively new style of acting training developed by German acting teacher Stephan Perdekamp that offers classes and workshops across the globe. Some of the actors endorsing PEM include Garrett Wang, known for playing Harry Kim on Star Trek: Voyager (LA), Sven Rygrock, known for Zulu alongside Orlando Bloom and Forest Whitaker, and Jon Sidgwick, known for EastEnders. We went to PEM instructor Sarah Victoria for more info on this new style of instruction.

As with any interview we conduct with someone in the entertainment industry who’s offering services, this should be taken as informational, rather than an endorsement. We always encourage you to do your own research and decide if any photographer, teacher, class, school, or style sounds right for you. That said, more on PEM!

CNI: Firstly, can you tell us a little bit about yourself and how you came to learn about PEM?

SV: I am an actress trained in the techniques of Strasberg, Stanislavsky, and Meisner at institutions in London and Vienna. I came across PEM during my second year of acting school and immediately decided to train PEM full-time with its creator Stephan Perdekamp.

The reason for my immediate and clear decision was on one hand due to PEM’s direct and effortless access to authenticity, intensity, quickness, and ease in approaching emotions and on the other hand, because PEM offered me the missing link between mere psychological acting and the instinctive, guttural biological and organic level of performance I always strived for. 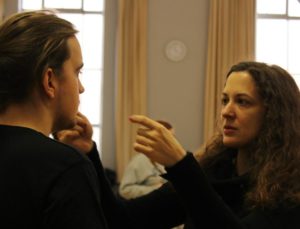 Mr. Perdekamp has analysed the emotional processes meticulously on a biological, purely physical level and has carefully isolated bio-energetic triggers for emotions that can be accessed instantly, repeatedly, and safely. He found the direct access to emotions that has been deemed impossible so far, a fact that is not only testified by thousands of students from 38 countries and six continents but was later scientifically supported through an extensive research by the Austrian Federal Ministry of Economy, Family and Youth and officially released by the Austrian Research Promotion Agency (FFG). More proof is that PEM is already part of the curriculum of the prestigious BA Acting Course at the Royal Central School of Speech and Drama at Solent University and is represented in the summer programme of Rose Buford College 2016. PEM workshops were invited by the University of Johannesburg, South Africa and the Babeş-Bolyai University of Cluj, Romania as well as by the German State Theatre in Timisoara, Romania and the Edinburgh Fringe Festival etc.

CNI: What is it about PEM that you find works?

SV: The most exciting thing about PEM is the fact that you access real biological energetic patterns through simple triggers that can be used as easily as it is to raise an arm. After a little bit of training, the energy work becomes second nature to you and through it you automatically raise your presence and draw the audience’s focus on every little action you perform on stage or screen. Because the whole process is biological – and therefore natural in the purest sense – actors immediately experience a huge increase of self-confidence and expressiveness.

In 2004 I became a certified PEM Instructor and since than have travelled and taught in countries from South Africa to the UK and from the USA to Romania and worked with actors from over 30 countries.

CNI: What do you love most about teaching it?

SV: I love the look of wonder and utter joy on actors’ faces when they experience the first trigger and realise that they just accessed a whole new level of awareness in their bodies that can be directly used for their acting. Another very satisfying effect is the freedom and surety that actors gain through PEM’s blockage opening exercises.

CNI: Okay, so how does PEM work? 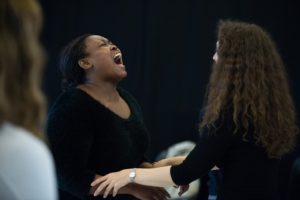 SV: Mr Perdekamp found triggers in the body that are biologically responsible to make us emotional. So, if you trigger the spot for “aggression,” your body instantly and automatically becomes physically angry. If you trigger “grief,” you automatically become sad and so on. While other methods utilise more circumstantial means, to convince our bodies subconsciously to reach for those triggers, with PEM it is now possible to address these triggers directly, without detours and even without any personal experiences or memories with these emotions.

PEM exercises are designed to work through blockages and personal restrictions and to offer a very clear and precise control over emotions at the same time. A lot of actors said before the first units of PEM “that sounds too good to be true,” because we are all so focused on the claimed impossibility to access emotions directly. But after experiencing PEM’s new knowledge they all say “everything you claimed is true!” Or how Mr. Perdekamp would put it: “Mankind has progressed through the efforts and achievements of former generations: we can now afford to be more sensitive and more conscious than any other generation before us. This gives us artists of these new generations artistic possibilities – more subtlety, more expressiveness, and more authenticity than actors ever had before.”

CNI: And finally, the big question, why do you think it’s good for other actors?

SV: Because PEM works on a extraordinarily subtle level, that other methods don’t address, it does not interfere with other methods but in fact supports and complements them by adding a secure, reliable, and biological base for any emotional expression. It saves time and energy and helps actors to feel confident and sure of their craft. Most of all, PEM protects actors against the exploitation of their personal experiences or their psyche in order to generate intense, emotional states.

Through its biological energy work, PEM enables actors to create real relationships with others, with props, sets, or costumes and helps to establish real atmosphere. Subtle changes in emotions between sentences for a close-up or strong emotional expression for the stage become easier to manage and more reliably repeatable.

Sarah Victoria has been performing on stage since she was five years old in theatre plays and dance performances. She has performed as an actress in a variety of productions across Europe and is an accomplished acting coach currently delivering workshops in Europe and the USA. Sarah Victoria trained directly with PEM creator Stephan Perdekamp. She has lead international PEM workshops in Los Angeles, New York, Miami, London, Edinburgh, Johannesburg, Amsterdam, and various cities in Germany, Austria, and Romania, with actors attending from 38 countries including the US, Great Britain, France, Spain, Italy, Turkey, Canada, South Africa, Australia, and many more.

To read more about PEM, or to get in touch with Sarah Victoria and the team behind it, you can visit their website, http://pem-acting.com.