September was quite a busy month. In addition to the regular-usual, I rescued two stray dogs, spent a morning counting bikes and pedestrians on Western & Wilshire, turned 54, paid my biggest tax bill in 10 years, attended my second read-through of a friend’s play, attended my first EDM concert ever, and did over half of it in temperatures over 95ºF. While that’s a lot of stuff (especially taking into account the volume of “regular-usual” I have in a month), what struck me was how much I learned from it, and how much of what I learned is applicable to acting. Let’s dive in, shall we? 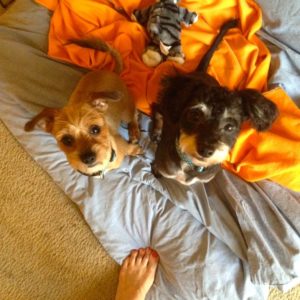 Who has good feelings about municipal animal shelters? No one I know. In fact, most of the people who chimed in when I reached out for help on social media told me to keep them from the shelter at all costs (and costs, as it turns out, are not inconsiderable!).

But the animal rescue mavens set me straight: not only does turning the animals over to the county give the owner a five-day period to claim them, it also gives the pups a chance to get spayed or neutered, vaccinated, checked for diseases, and microchipped. Oh, and also? It’s the law.

I remembered back to my sad, sad turn on Ellen a billion years ago—the sitcom, for those of you too young to know she had one. As I’d been hired out of an improv company and improv in the audition had landed me the part, I assumed that I should continue to improvise on set. No one told me I shouldn’t, but no one told me I should. I just assumed. And you know what happens when you assume, right? Exactly.

You also don’t get asked back on Ellen and you maybe get a citation or fine. Call the shelter. Shut your trap.

Well, turns out that all that tedious prep was pretty useful. Because what if the bike is being pushed by a person? What if the person is on a Segway-type device? Even going through the many permutations of bikes-plus-people or people-plus-wheels, I had to stay on my toes in the field. For as annoyed as I was that we had to go through it, all the preparation really made the difference.

If that sounds familiar, please remember the last piece-of-cake audition you just decided to wing-it on. How’d that work out for you?

When I was in my early 20’s I thought 54 was for 1970’s discos, not people. I am happy to report this is not so. In fact, where acting life is concerned, 54 is kind of the beginning of the end of the long, dry desert. All that, and AARP discounts, too? Huzzah!

Similarly, I used to complain about paying taxes just like I complained about acting jobs—or even straight jobs—that were “beneath” me. Then work dried up and I didn’t have to pay them anymore. Ruh-roh.

Lesson learned: Any job, acting or otherwise is a gift. The more I remember this, the happier I am. Even paying taxes. (Especially paying taxes.)

Honestly, I went to this one thinking I was doing the right thing, showing up for friends & colleagues to support their art. What I was reminded of was how much I learn by getting to view the development process when it’s occurring in someone else’s life or art. What I can’t see in myself, I see mirrored elsewhere. Then I get to take those lessons back to my work.

Also, I get to do my friends a solid. Never hurts!

Similarly, I said “yes” to a Zedd concert because I’m trying to say “yes” to things, not because I liked—or even knew anything about—EDM. (Well, I also said “yes” because it was a VIP situation, with all the free food and beverage that implies. I was not disappointed!)

Turns out that EDM is not only hella fun to dance to, but a dazzling theatrical experience. I got excited about the possibilities of incorporating certain aspects of the production into future work of my own, and had a great time doing it. It was also some of the best people-watching/character-homework-doing to be had outside of an airport. Inspiration is everywhere! (And in the VIP area, so are Skittles!)

I wish I could say there is nothing redeeming about a heat wave, because boy, do I hate the heat. But the truth is that extremes and obstacles force me out of my comfort zone, where I have to apply my will and my creativity. Just like “bad” parts or really, really unpleasant work situations. (And if you work in any kind of film or TV situation, this is only a matter of time.)

Inspiration and its kissing cousin, edification, really are everywhere you look. And since you have to live a “real” life anyway, why not use some of that juice for your big, fat, crazy acting life?

Colleen Wainwright is a writer–speaker-layabout who started calling herself “the communicatrix” when she hit three hyphens. She spent a decade writing commercials and another decade acting in them for cash money. Now she uses her powers for good instead of evil by helping creatives learn how to strut their stuff in a way that makes the world fall madly in love with them.
Follow @communicatrix //