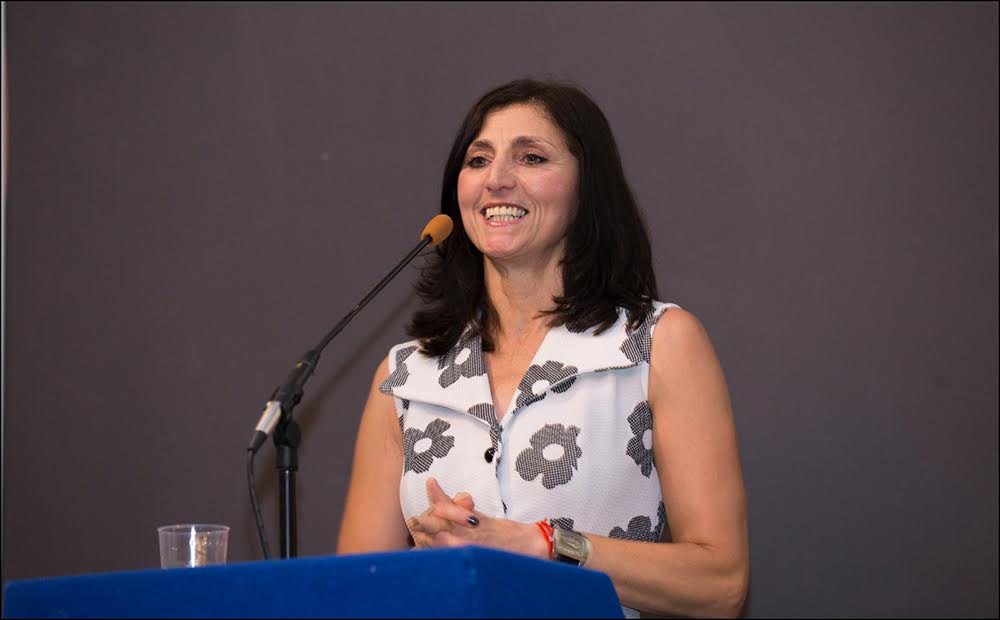 I recently got a call from Directors UK, a fantastic organisation I’m a member of, telling me I had been selected to take part in a week long course training in multi camera Directing at ITV, at Media City in Salford, Manchester. The course and our expenses were fully funded by Creative Skillset. I readily accepted the place and was intrigued and excited to get started. I had previously only ever Directed single camera on drama and used two cameras very occasionally when shooting my latest documentary Still Loved, so I was keen to get stuck in and learn a new skill.

Day 1.
The course leaders were Kay Patrick and Ian Bevitt, two long standing Directors on Coronation Street, as well as many other programs. We were being trained to work on Coronation Street, using their house style, which I soon realised meant much more than using 2 cameras at a time! We were introduced to our 1st AD for the week, Woody Wade, and all the Heads of Department and Producer of Coronation Street, a really lovely, friendly bunch of people. They each explained their own roles and how things work on the show. We looked around the studios and galleries to see other Directors at work and get an understanding of the work flow and speed with which it is all put together. At the end of the day we were given our first script of the week, which we had to go back to our hotels and study ready to hand in our plans for the first shoot. 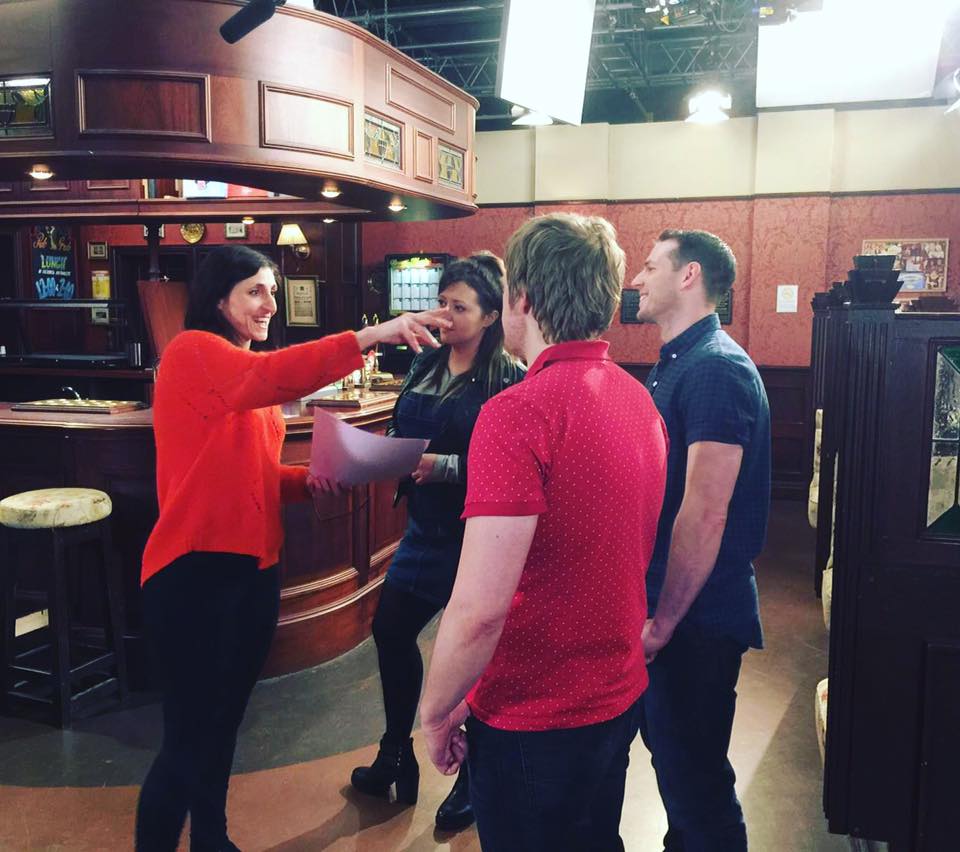 Day 2.
By now I understood it’s all about the planning. Using a plan of the set, you plot your 3 camera positions and where you want your actors to be. Shooting 3 cameras means you have to be super careful about not crossing the line when there is a lot of movement within a scene. You also have a very short time to film. What I didn’t realise was that you also have to have plan the edit, before you shoot. So you mark your scripts up with each cut, when you want to cut from say a close up on camera 1, to a 2 shot on camera 3 etc. So it’s quite mind boggling to get your head around, but it was starting to make sense. We handed our plans in for the first scene and then were given scenes 2 and 3, which were much more complicated and we had the weekend to prepare these.

Day 3.
It was pretty nerve wrecking for the first time walking out onto the studio floor. We were filming on the Bistro set. There was a much bigger crew than any I had worked with before and I walked out and introduced myself to them and then met the actors. From that moment I had an hour to complete. We had been trained extremely well by Kay and Ian and their words were resounding in my head. “You have to appear confident and in control. If you’re not, you have to pretend to be”. We were advised to have no more than 20 minutes on the studio floor. We did a couple of line runs and blocked the scene. It was a nice simple one on the first day. Then I checked things through with camera, then you go into the gallery, a studio, from where you direct the scene. You sit in front of 4 screens, these relate to camera 1, 2 and 3. The 4th one is the mix. On my left was Linda Kelly, the vision mixer, who is following the marked up script, cutting from one shot to the next as they are acting out the scene. On my right was Eileen Wood, the Script Supervisor. Both of these women were incredible and fantastic at their jobs, working at lightning speed. Over a mic you communicate with the crew and rehearse until you are happy with everything. You then go for your first take. 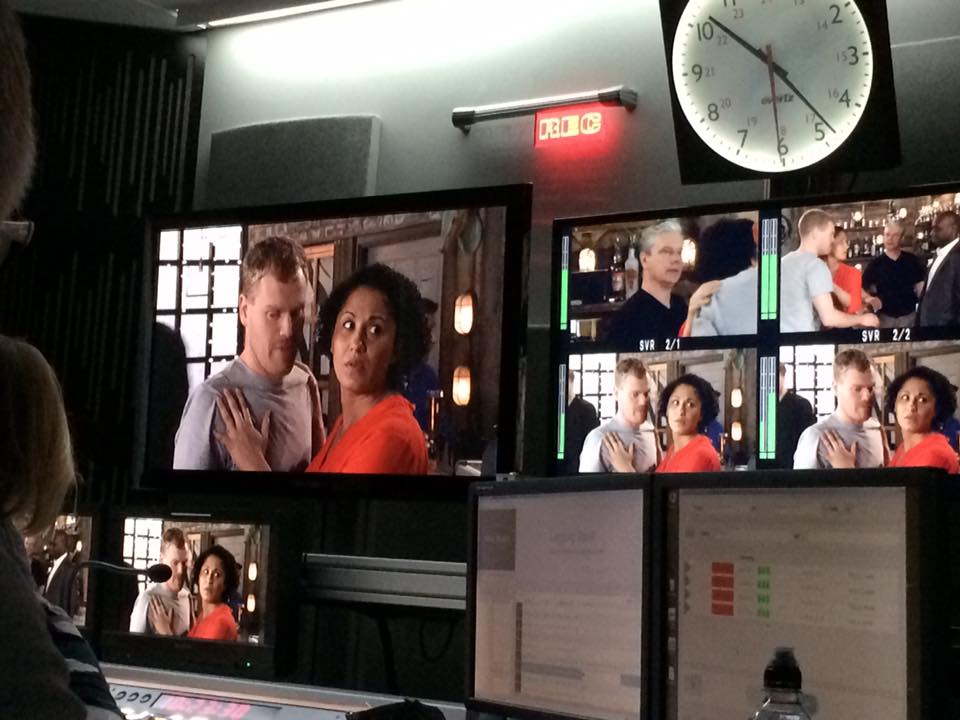 Time is of the essence on Coronation Street, so as soon as you are happy you complete that pass. If you need to pick up any shots you do this quickly. I felt very time pressured . If we hadn’t finished on the hour, we would have to stop. As it happened I completed it in 40 minutes and was very happy. That afternoon I had one hour to edit. Because Linda had vision mixed so well, according to my plans, it meant that it was pretty much edited as soon as it was shot so we just had to tweak a little bit, making minor adjustments to pace etc.

Day 4.
I was second up again this morning. This scene was way more complicated and I had put in a lot of movement, unlike the first scene. It was in the Rovers. We started blocking, but I got a bit confused because the choreography of the scene was quite complicated and I did start to panic inside. Woody our 1st AD was on hand to support me, and she was an absolute rock, keeping me on track. The team do work incredibly well together on the Street. We had to make some adjustments to my camera plans and then it was into the gallery to shoot the scene. This one was complicated and difficult and I did find it a real challenge but with great back up from Linda and Eileen, I finished on time. The edit was straight forward.

Day 5.
I was first up today. This was the most complicated scene as it was longer and there was a fight, with 4 actors, and 4 extras. We had an hour and 15 minutes. I felt really in control today. Everything was making sense, it all flowed really well and I hit my stride nicely. We finished just on time and I was really happy with how the scene had gone. Again the edit was swift and I was pleased with the outcome. I observed for the rest of the day and was relieved my three scenes were in the can.

Day 6.
This morning we watched some very experienced directors shooting their scenes and was relieved to see how relaxed they were and how much fun they all had. It hadn’t been relaxing for us! It felt a bit like having your first few driving lessons when everything is unfamiliar, then after a while you can drive without thinking anymore. In the afternoon, we all had watch everyone’s three scenes back to back and critique them. It was fascinating to see seven very different versions of the same scene as we all put our own unique marks on them. We were all given fantastic feedback. We were told that every single scene was broadcast quality, good enough for the show. They course leaders were really happy with them all. We each had to then pick our favourite scene to show to the bosses for their feedback. Funnily enough, the scene I selected was the second one, that had been the most difficult shoot and the one I thought was going to be a disaster. But it worked really well in the end and had a good energy and pace. We then showed our selected scenes to the bosses and the feedback was great. Again we were told that all of them were excellent and good enough to be broadcast.

I’m really grateful for the opportunity I had to learn multicamera. As an independent filmmaker, I’m not sure how much I’ll use this, but it’s good to know how to do it, and maybe I’ll do some television Directing at some point where I can put it into practice. If nothing else it’s increased my confidence and shooting single camera will seem quite easy after this!

Kay, Ian, Woody and the whole team at ITV were incredibly supportive and accommodating. Big thanks to Directors UK and Creative Skillset for enabling this. It was a total baptism of fire, but incredibly well worth it!

Debbie Howard is an independent film Writer/Director. She set up Big Buddha Films bigbuddhafilms.co.uk in Sheffield ten years ago and specializes in making films with strong female roles. You can follow Big Buddha Films on Facebook and Twitter to find out more about their films.