Movie Review: Southside With You 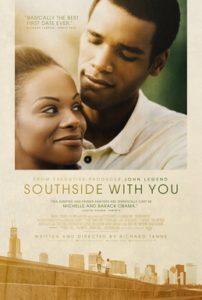 Summer, 1989. Do the Right Thing tackles race issues in America and puts director Spike Lee on the map. Janet Jackson’s hit song “Miss You Much” plays on radios across the country. And a 28-year-old Harvard Law student named Barack Obama goes on a date in the Southside of Chicago with his summer advisor, Michelle Robinson. Southside with You is illuminating, entertaining, and the film’s leads, Tika Sumpter and Parker Sawyers, are both terrific. Opening in a limited number of theaters, this is definitely one to check out on the big screen if you can.

At the beginning of the film, we are introduced to Barack Obama (Sawyers) and Michelle Robinson (Sumpter), each in their element as they prepare for what they both classify as “not a date.” As each gets ready, we get a great sense of their environments and how they interact with their loved ones. Barack is calm and cool as he smokes a cigarette and talks on the phone with his grandmother, who warns him that he better not be late for his date or he’s not going to get a second one. Michelle gets ready and keeps telling her parents Marian and Fraser (Vanessa Bell Calloway and Phillip Edward Van Lear) that she is Barack’s advisor and that this is definitely not a date, just two colleagues going to a meeting, even though she is clearly dressed for a date.

Barack eventually arrives—late—to pick up Michelle. He drives a beat up old car with a hole in the floor and showers himself in Binaca before putting out his cigarette. Soon after their date begins, Barack lets Michelle know that the meeting actually is not for a few hours, and they should have time to go to a museum and get lunch beforehand. Begrudgingly, Michelle agrees, but continues to insist that this is not a date—a fact that does not dissuade the charming Barack. The scene that takes place in the museum is really quite special. This is the first time where we really see Barack and Michelle connect on a meaningful level. As they gaze at a painting by Ernie Barnes, Barack regales Michelle with stories of Barnes’ work, including his work on the sitcom Good Times.

From there, the two go to a meeting at a church where Barack is known and loved by all in attendance. In the meeting, a local community center is the topic of discussion, and the mood is somber and negative—most feeling that the community center is a pipe dream that will never come to fruition. It is at this point that we see the Barack Obama, master orator, that we have come to know. Barack stands up and tells these local Chicago residents why they cannot give up, when they are told no, they must carry on. The speech is inspiring, and Michelle is clearly moved by it, seeing that Barack has conviction and is more than just a smooth-talker. The date continues, and after a viewing of Do the Right Thing, a few drinks, and a chocolate ice cream cone, the path is laid out for Barack Obama and Michelle Robinson to become one of the most influential couples in our nation’s history.

The beauty of Southside with You is in the details. We not only get a glimpse into an extremely intimate afternoon between the couple that twenty years later would become President and First Lady, but we also get a closeup look at Chicago in the late-1980s. We also get to see Barack and Michelle in their elements, and we get an idea of who they were before they got together. Michelle is extremely career-oriented, initially scoffing at the idea of being on a date with Barack because, being his advisor, she would not want to send the wrong message. Barack is calm and comfortable in his own skin. He likes Michelle, and he knows that there’s something there between them, even if she refuses to acknowledge it at the beginning. We also see Chicago. We see apartments and restaurants and city streets and museums and churches in a realistic, sometimes documentary style of filmmaking. Director Richard Tanne and Cinematographer Pat Scola do a terrific job in this respect, bringing the story vibrantly to life.

It feels right that this film comes out at this point in our history. As Barack Obama is about to complete his final term in office, this is the perfect story to witness as the Obamas move on to their next adventure—looking back and seeing where it all began. It also feels appropriate that Do the Right Thing makes such a prominent appearance in the film—we end up watching much of the climax of that film, which includes the murder of a black man by a police officer, in the theater with Barack and Michelle. That movie, which delves into the racial inequality that existed in the country at the time, echoes our current time in a palpable and painful way. Yet seeing a young Barack Obama and Michelle Robinson take in the film and absorb its message is somehow quite comforting.

Southside with You is an endearing and heartfelt flashback to the first date of the future “First Couple.” Tika Sumpter is terrific as Michelle Robinson, and Parker Sawyers, in particular, shines as Barack Obama. There are times throughout the film that you forget you are watching two actors. The film, at 84 minutes, moves quickly but still finds time to breathe. If you are interested in American history and want to get a deeper look at our President and First Lady before their time in office is complete, then you should definitely see Southside with You as soon as possible.