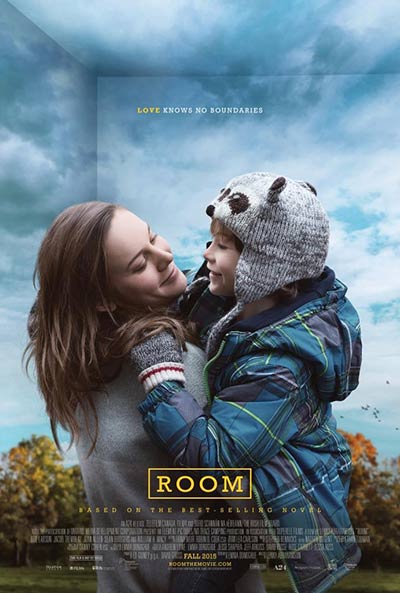 “Once upon a time, before I came, you cried and cried and watched TV all day, until you were a zombie. But then I zoomed down from Heaven, through Skylight, into Room. And I was kicking you from the inside. Boom boom! And then I shot out onto Rug with my eyes wide open, and you cut the cord and said, ‘Hello Jack!’”

Room is unquestionably one of the most thoroughly engrossing movies of the year. The screenplay, written by Emma Donoghue (who also wrote the novel on which the film is based), is terrific, and you will not be able to take your eyes of the stars Brie Larson, who won an Oscar for her performance, and terrific newcomer Jacob Tremblay. It is difficult to watch at times, but it is ultimately an incredibly uplifting film about the power of hope and the love between a mother and her son.

The film opens in a small room, which we see through the eyes of a small boy. The boy, Jack (Jacob Tremblay) lives here with his Ma (Brie Larson), and we begin to piece together who they are and why they are in this room. As the story progresses, we realize that 5-year-old Jack has never been outside of this room. What he knows about the world is limited to what he sees on television and the stories his Ma tells him. Soon, we come to discover that Jack and Ma are in this room because Ma was kidnapped years before by “Old Nick” (played by Sean Bridgers), subsequently impregnated with Jack by Old Nick, and she and Jack have been held captive in Room (as Jack calls it) ever since. The first half of the movie takes place entirely in Room, getting to know Jack and Ma and their relationship. The second half of the film explores what happens to Jack and Ma when they are finally able to break free from Old Nick and make it out into the world.

Room succeeds on every level, and it all starts with Emma Donoghue’s Oscar-nominated script. Donoghue, who also wrote the novel, explores one of the most unthinkably grim scenarios, and manages to leave the viewer with a renewed sense of hope. In the early scenes of the film, we see what amounts to a typical day in the life of Jack and Ma, as they do yoga together, watch Dora the Explorer, and do other mundane activities. We are then introduced to Old Nick, and through Jack’s eyes (mostly from the noises we hear happening above Jack’s bed, and a few brief glimpses of him that we see), we understand what his relationship is like with Ma. One of the most interesting aspects of the film, in fact, is that we see the world through Jack’s eyes. Jack does not realize that this world that he lives in is so dark and so brutal. The horrors of the world (and in Jack and Ma’s world, the horror is embodied by Old Nick) are largely hidden from Jack, as Ma tries to protect him from the fact that the two of them are prisoners in a tiny world—much in the same way Guido protects his son from the fact that they are living through the Holocaust in Life is Beautiful.

As good as the writing and the directing are in this film, the biggest reason to watch it is for the performances of its two main actors, Brie Larson and Jacob Tremblay. Larson, who won an Oscar for her performance, is spectacular. Ma is an extremely complex and difficult role to play, and if the actress playing her was anything less than completely connected, the film would not work nearly as well as it does. Ma has been in captivity for 7 years, she gave birth to a child from the rape of her captor, and she loves her son more than anything else in the world. When she eventually does escape back into the world, she has to deal with many obstacles, like the fact that her parents are no longer together and the home that she knew when she was abducted is not the same as it was, and the fact that her father cannot even look Jack in the eyes because he knows from where he came. Another question that arises (from a reporter played by Wendy Crewson) is why Ma chose to keep Jack instead of giving him up to live a normal life. These are heavy and existential questions that most people could not even imagine having to deal with, and Brie Larson makes it all feel so palpable. She becomes the character, and when the character has been through as much as Ma has, then that feat is truly remarkable.

Jacob Tremblay is every bit as good as Brie Larson, and the role of Jack is just as important to the story. He must go through a range of emotions, and he does so with incredible ease—which is just as much a testament to director Lenny Abrahamson as it is to the young actor. The most viscerally intense sequence in the film is the escape from Room, in which Ma tells Old Nick that Jack has died and that he must take him somewhere to bury him. Jack is terrified but tremendously brave, and we feel every bit of that in Jacob Tremblay’s face. The rest of the cast is great, too, including Ma’s now separated parents Nancy and Robert (played by Joan Allen and William H. Macy), and Nancy’s boyfriend Leo (played by Tom McCamus). All of these characters are going through an incredible ordeal when Ma (whose real name is Joy, we come to find out) is back in their lives.

Room is a difficult film to watch at times, for many different reasons. Sometimes it is bleak, sometimes it is hopeful, sometimes it is scary. The script is fantastic, and all of the performances, particularly those of the two stars, are top-notch. It will stay with you long after you see it, and despite the dark subject matter, it will leave you with a renewed sense of hope. See it as soon as you get a chance.

7 Mike Danner is an actor, a painter, and a Cubs fan. He has a Master’s Degree in Film Production from Chapman University, his favorite movie is Jaws, and he enjoys a good breakfast sandwich. He currently lives in Los Angeles.