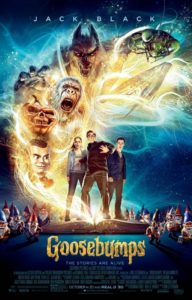 Phew, sorry, I had to get that out of my system.  Goosebumps is part Jumanji, part Hocus Pocus, a little bit Pinocchio, and contains more CGI animals and ghouls than you can count.  Jack Black plays a fictionalized version of R.L. Stine, the creator of the popular book series that the film is based around, and he does a fine job reining in the chaos that surrounds the film.  While Goosebumps may not quite live up to the classic book series, it provides enough fun for kids and kids-at-heart to have a good time for 103 minutes.

The film tells the story of Zach (played by Dylan Minette), a new kid from the city moving to the small town of Madison, Delaware with his Mom (Amy Ryan), who is also the new Vice Principal at his new school.  Zach soon meets next door neighbor Hannah (Odeya Rush), and he is clearly quite smitten with her from the outset.  His crush is temporarily put on hold when he meets her father (who turns out to be Goosebumps author R.L. Stine, played by the aforementioned Black) who yells at Zach through the window that he better stay away from his daughter if he knows what’s good for him.

Zach, temporarily deterred, soon does meet up with Hannah, and she takes him to a mysterious abandoned amusement park in the deep, dark forest.  When Hannah returns home, Zach can hear her father screaming at her, alarming Zach enough to call the police.  When the police find nothing suspicious, Zach takes it upon himself to rescue Hannah, so he employs his new friend from school Champ (played by Ryan Lee) to help him break into his new neighbors’ house.  The soon find a library within the house, and it contains the original manuscript for every single Goosebumps book ever written, each of them bound in leather and locked up tightly.  The two boys find the key, open one of the books, and an abominable snowman materializes and comes to life before their eyes.  Soon, all of the books are open, unleashing R.L. Stine’s imagination on the unsuspecting town, and the author himself, with the help of Zach, Hannah, and Champ, must figure out a way to get the monsters back inside before it’s too late.

The film works, despite a few glaring flaws that include a predictable script and an annoying amount of CGI that essentially turns the movie into a cartoon.  One reason the movie does work so will is its lead actor Dylan Minette.  Minette has been around for a while (he played the terrifying bully Kenny from the 2010 film Let Me In, and he more recently appeared in the underrated 2013 film Prisoners, playing Hugh Jackman’s son Ralph).  He was terrific in both of those films (particularly in Prisoners), and he is great in Goosebumps.  From the minute the film begins, we are rooting for him.  This is partly because of how his character is written, but it is mostly due to his nuanced and understated performance.  Odeya Rush also does a terrific job as Hannah, and Ryan Lee brings much of the comedy in the film as the nerdy and unflappable Champ.  It is a big credit to the Casting Department on the film, because these three roles could have easily been filled with one of the dime a dozen tween actors from Nickelodeon or the Disney Channel.  Jack Black is entertaining as R.L. Stine, but his completely put-upon accent and cadence becomes a bit annoying after a while.  Jillian Bell also stands out as Zach’s single and somewhat desperate Aunt Lorraine.

I’ve mentioned the special effects in the film feeling a bit, well, fake.  This could be chalked up to being part of the fun…these are, after all, children’s books coming to life, so the cartoony nature of the monsters is understandable.  However, it feels like just the most recent example of CGI taking over.  One of the reasons a film like, for example, Where the Wild Things Are, hold up so well and why a film like The Lion, the Witch, and the Wardrobe does not is their differing uses of CGI.  The former uses it sparsely and instead relies on incredibly realistic puppets for its creatures, while the latter uses it exclusively and exhaustively.  Goosebumps feels like actors interacting with animated concoctions (albeit expensive ones).  Granted, this is a film about characters from a series of children’s books coming to life, so the fact that they look like cartoons is hardly the crime of the century.  But I will maintain that the film would have been much better if they gave Jim Henson’s Creature Shop a swing at it.

Goosebumps is fluffy and fun, and children (along with the 20 and 30-something children-at-heart that are looking for a nice shot of nostalgia) will enjoy it thoroughly.  While the script is a tad predictable and the effects are a bit much, the excellent cast more than makes up for it.  If you are looking for a spooky good time, then this just might be the movie for you—and it will undoubtedly become a staple of cable networks looking for Halloween-themed programming for years to come.