Movie Review: Ghost in the Shell 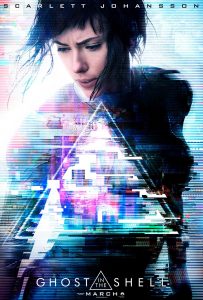 Ghost in the Shell

Despite being caught up in another Hollywood whitewashing controversy, Ghost in the Shell—which is based on the comic by Shirow Masamune—is actually a pretty entertaining action film. Scarlett Johansson—the source of the controversy, as the character she plays was originally Japanese—does an excellent job as Major, the world’s first 100% cyber soldier. The film drags at times, but the futuristic production design is excellent, and there are some genuine twists throughout. You might be better off waiting for video, but Ghost in the Shell is worth checking out eventually.
The movie begins with Major (Scarlett Johansson) lying on a surgery table. She can barely move. It turns out, or so she’s told, that she was in a terrible accident and that while her mind survived, her body did not. In this futuristic world, cyber enhancement is a general way of life, as body parts are routinely replaced with technology. Major (formerly a young woman named Mira Killian), however, is the first person who is entirely made up of cyber-enhanced technology. We cut to a year later, and Major is now a super-soldier working for the Hanka Robotics to help rid the world of criminals.
Working closely with her partner Batou (Pilou Asbæk), Major thrives in her new role, but she cannot shake the feeling that all is not what it seems. She hallucinates memories that occurred before her accident, and she eventually comes to find out from her once-trusted doctor Ouelet (played by Juliette Binoche) that although Major is the first successful attempt at fully connecting a human mind to a completely robotic body, she is not the first. In fact, there have been many before her. With Dr. Ouelet’s help, Major escapes and discovers even more secrets about her former identity. With Hanka Robotics on her tail, she must learn the whole truth in order to save herself and find out how Mira Killian ended up a test subject of the powerful organization.
Scarlett Johansson does a fine job as Major, aside from the controversy surrounding her casting. Critics say that Johansson’s portrayal of an originally Asian character furthers entrenches Hollywood in the whitewashing of characters of color. Others might say that a big-budget movie like Ghost in the Shell needs an A-lister like Johansson in order for the film to have enough of an audience to make its money back. While whitewashing is certainly an issue in the entertainment industry—and thankfully one that has been garnering a lot of attention in the recent years—one could also make the argument that the mere fact that this movie now exists will encourage fans to go back and read the original comic book and see the animated film from 1995. Either way, Johansson is terrific in the role, in both the emotional moments as well as the action-packed scenes that fill most of the film’s 107-minute runtime.
The production design, done by veteran Production Designer Jan Roelfs, and the beautifully futuristic landscape shots of Japan make the film visually stunning. There is certainly some digital enhancement throughout, as the buildings in the background look like something out of The Jetsons or The Fifth Element, but the end result is really something to behold. This, along with Johansson’s performance, almost make up for the fact that the story is fairly convoluted and the secondary characters are extremely one-dimensional. Are the visuals and leading performance enough to make this movie a top-notch action film? No, but they do make it mostly entertaining.
Ghost in the Shell is an engaging, albeit somewhat cliché and shallow, attempt to cash in on a successful comic franchise. Scarlett Johansson does action better than just about anybody, and despite the legitimate concern of Hollywood whitewashing, it is hard to imagine this role being played by anybody else. The production design is great, the story is acceptable, and the pace is fast enough to keep your attention. See this one when it comes out on video, and in the meantime, check out the original comic, as well as the 1995 animated film of the same name.