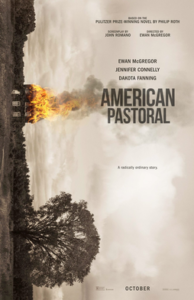 American Pastoral, written by John Romano and based on the book by Philip Roth, is a fascinating but uneven look at a family in 1960s America. There are some good performances throughout the film, and the cinematography by Martin Ruhe is excellent. Even though the film never quite takes off, its examination of the American dream in one of the most turbulent times in our nation’s history is definitely worth a look.

The film begins like a hazy dream as Nathan Zuckerman (played by David Strathairn) makes his way to his high school reunion. Zuckerman reminisces fondly about a local legend, Seymour “Swede” Levov (Ewan McGregor, who also makes his directorial debut with the film) a sports hero and a man destined to be great. Soon, Nathan runs into his old friend and Swede’s brother Jerry, who gives him the bad news that Swede has passed away. It turns out that Swede, despite being primed to live a life of happiness and privilege, wound up being surrounded by tragedy heartache. Jerry tells Nathan the whole story, which encompasses the main plot of the movie.

Soon after graduating high school, Swede marries his high school sweetheart Dawn (Jennifer Connelly), and they have a daughter Merry (played by Dakota Fanning, in the best performance of the film). Merry has a stuttering problem, which her therapist believes can be attributed to a desire to live up to her parents’ expectations. Merry’s relationship with her mother is cold and distant, while her relationship with her father has issues of its own. Most of the action in the film takes place in 1968, a politically and culturally chaotic time (and quite apropos for the film to come out this year, with all that is going on in the country), and Merry becomes involved with a radical political organization in the city. When a local business owner is murdered by a bomb, the police show up at the Levov residence looking for Merry. Did she have something to do with it? This question is at the center of the remainder of the film.

American Pastoral has interesting moments throughout, but it never quite gels. The performances are pretty good across the board, although neither McGregor or Connelly are fairly wooden in their portrayals of Seymour and Dawn. Fanning is excellent as Merry, as are Ocean James and Hannah Nordberg (who play Merry at ages 8 and 12, respectively). The character of Merry is at the heart of the film, and Fanning must go through an incredible transformation—from innocence, to disillusionment, to a soul that is lost and gone forever. This is quite a task for the young actress, but she pulls it off beautifully. If for no other reason, the movie is worth seeing for her nuanced and tragic performance.

The movie plays out like a book, which makes sense because it is based on the 1997 Philip Ross novel of the same name. This weakens the film at times, however, as we feel like passive observers watching the action unfold. Part of this is due to the historical nature of the film, with the narration making us feel a step removed. While it may work well in novel form, bookending the film from Nathan Zuckerman’s perspective, a character that we never meet in the 1960s world of the story, gives the audience a sense of disconnect. A great example of bookending a film in the current time period, while flashing back to another era, is A League of Their Own. But that works incredibly well because we see the entire film, including the beginning and ending, through the protagonist’s eyes. In American Pastoral, on the other hand, a side character takes us into and out of the main arch of the film, so we are left feeling somewhat empty when all is said and done.

While this is not a great film, it is still a good one, and there are enough elements at play that make it worth watching. The setting of 1960s America and the search for an American dream that may not even exist is extremely relevant in 2016 America, and Dakota Fanning is terrific as the tragic Merry Levov. You do not need to see this one on the big screen, but it would be worth a rental at some point down the line.