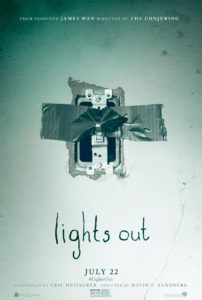 When the lights go out, Diana shows up. Lights Out, based on a popular short film that went viral in 2013, stretches a simple premise from three minutes to 81 minutes, and provides a few decent scares in the process. While definitely not a perfect movie, and not even the best horror movie to come out this summer, you can definitely feel producer James Wan’s master touch from time to time throughout the film. David F. Sandberg, writer and director of the short, does a serviceable job in his feature film directing debut, the actors do what they can with the somewhat limited material, and there are some genuinely frightening scenes throughout.

The film begins ominously, in a dimly lit warehouse on a dark and stormy evening. Here we meet Paul (played by Twilight’s Billy Burke), who is on the phone with his son Martin (played by Gabriel Bateman, who also appeared in James Wan’s Annabelle). Martin complains his mother is acting strange and “talking to someone,” and Paul promises he’ll be home in an hour (spoiler alert: he will not). After Paul’s assistant sees the figure of a woman appear every time she turns out a light (this opening scene is actually very similar to the short film, even down to the actress Lotta Losten), Paul begins to lock up for the night. Soon, lights are turning off on their own, the figure that appeared to Paul’s assistant is now aggressively pursuing Paul, and you can probably guess what happens next (remember the above spoiler alert).

We are soon introduced to Rebecca (played by Teresa Palmer), and we learn through clunky dialogue and production design that she has a bit of a commitment issue with her boyfriend, Bret (Alexander DiPersia). We also learn that she is Martin’s half sister, that her own father was killed in a similar fashion to Martin’s father, Paul, and that their mother Sophie (played by Mario Bello, an excellent actress who is not given quite enough material to run with in this film) has been conversing with a dead woman named Diana. Diana, a woman that Sophie met at a psychiatric institution years back and later died, has now been haunting Sophie and the rest of her family. When things go from bad to worse, Martin moves in with Rebecca, but as soon as the lights go out, Diana is there. From here, there are lots of scenes of lights turning off by themselves, people trying to escape, and Diana terrorizing everyone.

Lights Out does not have the best performances, it is not the most visually stunning horror film in the world, and the dialogue often feels like a first draft. However, it has a great concept and it is executed well enough for the film to work. It is essentially a one-note film—if the lights go out, Diana will get you. It makes for some frightening scenes and is able to sustain itself for the (albeit short) run of the film. On top of this, Diana is a pretty scary villain, and the fact that we really only see her with the lights out makes our imagination fill in the horrors lurking beneath the shadows—tapping into the Spielberg “Don’t show the shark” axiom—and making the movie that much scarier.

The big issue with the movie is its lack of substance and originality (aside from the solid premise). To begin with, the exposition is on-the-nose and fairly cliché. For example, when we are introduced to Rebecca near the start of the film, her fear of commitment is hammered over our heads from the dialogue to the production design. She kicks Bret out of her apartment because she does not want him to sleep over, and we find out that he has never spent the night even though they have been dating for quite some time. He then tries leaving a sock in one of her drawers, which she finds and throws down to him before he leaves. Rebecca might as well be wearing a sign that reads, “I don’t let people get close to me.” While her fear of commitment is an important feature for her character—it is tested throughout the film, particularly when she must take up the responsibility of looking after her estranged half-brother Martin—it is handled a bit awkwardly. Additionally, all of the characters are fairly one-dimensional and are forced to deliver some pretty (at times) rough dialogue. Luckily, the actors in the film are good enough to pull most of it off.

The movie is by no means an instant classic, but there are some genuine scares throughout and it is always nice to see a first-time filmmaker succeed—all flaws in the film aside, it will be fun to track David F. Sandberg’s career as he becomes more confident in his directing skills. If you are feeling the need to see a horror film, and you want to see it in the theaters, and you’ve already seen The Conjuring 2, then Lights Out just might satisfy your craving.