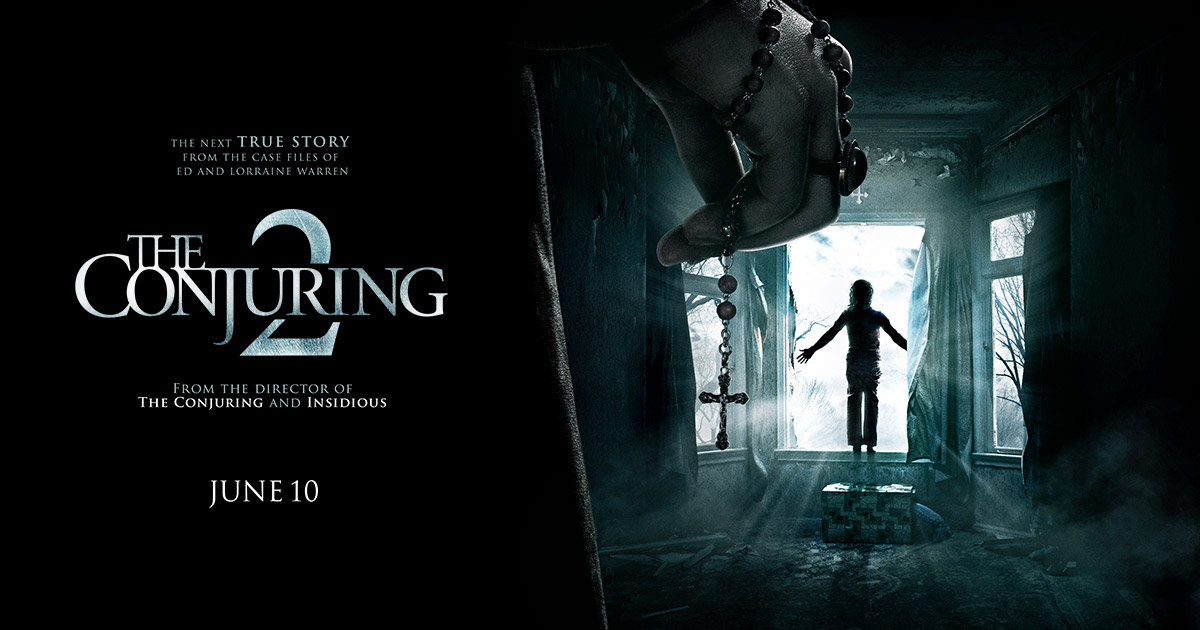 If you are already scared of nuns, then The Conjuring 2 will probably give you nightmares for the rest of your life. America’s favorite ghost hunters, Ed and Lorraine Warren (played by the terrific duo of Patrick Wilson and Vera Farmiga), are back in this sequel to the popular 2013 horror film. While the jump scares accompanied by loud music cues are plentiful, director James Wan is also able to maintain a prolonged sense of terror throughout. The cinematography, the score, and a tight script pull you into the world of one of the better scary movies in recent memory.

The Conjuring 2 takes place six years after the original movie, this time in England during the Christmas season of 1977. The Hodgson family, which includes single mother Peggy Hodgson (Frances O’Connor), daughters Janet and Margaret (Madison Wolfe and Lauren Esposito), and sons Billy and Johnny (Benjamin Haigh and Patrick McAuley), begins to experience some strange things in their home. At first, as is always the case, it starts off small. A bump in the hallway, a banging on a bedroom door. But soon, chairs are being flung across the room in front of the children, the mother, the neighbors, and even the police. Eventually, the Warrens are called in to investigate what the newspapers have dubbed “England’s Amityville”.
The Warrens, however, are uneasy about getting involved, as Lorraine has a premonition that Ed will die in the house. On top of this, Lorraine has recently had visions of a horrifying nun, who has come dangerously close to killing her. Because of this, the ghost hunters decide to give up investigating for good—that is, until the church comes calling on behalf of the Hodgson family. The Warrens travel to Enfield, England in the days leading up to Christmas to investigate what might be happening in the Hodgson’s haunted home. While at first the Warrens believe this to be a case of a poltergeist in the form of an old man who died in that house years ago, they soon discover that it might actually be related to the evil nun from Lorraine’s visions—a nun that we come to find is not, nor has ever been, human. Will the Warrens save the day? Or will Valak, the demonic nun, prove to be too much for them to handle?

While the film does rely a bit too much on cheap jump scares—a technique that has become a trademark of modern day horror movies—these are secondary to the character development and overall feeling of dread that persists throughout most of the story. While the main narrative drive revolves around the Hodgson family, and the Warrens’ involvement with their case, the true heart of the movie belongs to the relationship between Ed and Lorraine—a convention that was true of the first film as well. While we get to know the Hodgsons—we find out that Peggy Hodgson’s husband is no longer in the picture, the Hodgson siblings are very close and protective of each other, and an old man died in the Hodgson house in a chair that the Hodgsons still have—we also really get a glimpse into the lives of Ed and Lorraine Warren. We see quiet scenes that show how much they care about each other—that Ed is prone to losing his temper, but a glance and a touch from Lorraine and he’s brought back down to earth. We see how much they trust each other completely, not just with each others’ hearts, but with each others’ lives, as well.

With all of that being said, nobody goes to see a movie like this because of the character development—although that is an essential ingredient. People go to see a movie like this to be scared, and the good news is that The Conjuring 2 delivers on that level in a big way. There is nothing new in this film, per se, that has not already been done in other horror films (that has not already been done in The Conjuring, even), but Valak, the demonic nun, takes things to another level. Early in the film, Ed has a vision of the nun (who Lorraine has already seen in her dreams), and—being a gifted painter—paints a frighteningly realistic portrait of her. Later in the film, Lorraine finds herself locked in a room with the painting, which is now on the wall and at eye level. Soon, the lights are dimmed, and it is hard to tell if the painting is still a painting, or if it is actually the nun incarnate. It is one of the scariest scenes in the film, and it will stay with you. Again, if you are scared of nuns and want to sleep at night, this might not be the movie for you.

The newest entry in the ongoing Warren saga may not add anything new to the genre, but it is just about as scary as anything else you will see today. James Wan is at the top of his form, and Vera Farmiga and Patrick Wilson are both terrific as the famous ghost hunting duo. There are plenty of scares, a surprising amount of emotional depth, and one of the creepiest characters to grace the screen in quite some time. If you like horror movies, and you were a fan of the first movie, then The Conjuring 2 should not be missed.